Match the photographs below with disorders caused by maternal disease or exposure during pregnancy. (Hint: Some exposures may be reflected in more than one picture.) 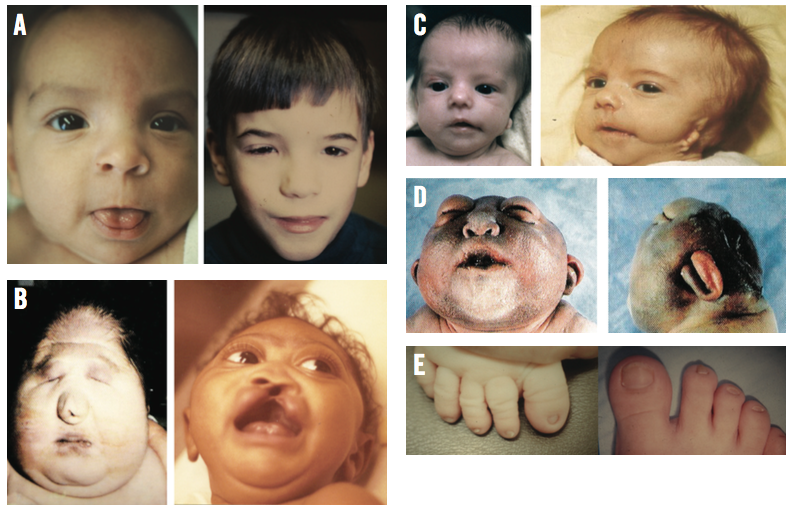 (Answers and discussion are on the next page.)

1. Isotretinoin:  Figure C. No photos specifically match retinoic acid exposure from isotretinoin with its multiple malformations, but hemifacial microsomia with unilateral hypoplasia and malformation of the jaw and ear is often part of this malformation pattern (Figure C).1-3 The line from mouth to ear for the child on the left side of Figure C represents persistence of the first branchial groove. Branchial arch anomalies along with other craniofacial and cardiac defects derive in part from the neural crest that is sensitive to isotretinoin. It is estimated that 25% of fetuses exposed during maternal treatment for acne will have major malformations, and there have been successful pregnancy prevention strategies in many countries.3 Though isotretinoin is cleared rapidly form the body, other retinoids such as etretinate that are used for psoriasis may require 2 years before elimination from fat stores is adequate for safe conception.2

2. Maternal diabetes: Figures B, C, D. Uncontrolled diabetes in early pregnancy can cause a broad pattern of birth defects4 that include holoprosencephaly (Figure B), hemifacial microsomia (Figure C), and anencephaly (Figure D).1,3 Defective forebrain formation in holoprosencephaly interferes with midline facial development, producing midline cleft with hypotelorism in the child to the left (Figure B) and severe facial changes with down-slanting palpebral fissures and nasal proboscis in the child to the right (actually a child with chromosome aberration). Hemifacial microsomia (Figure C) is a branchial arch defect that affects the external ear, maxillary, and mandibular primordial. It can occur as a sporadic defect but also has increased frequency with maternal diabetes. It can be part of Goldenhar syndrome (dermoid cyst of eye, vertebral, radial, and renal defects), a similar pattern of anomalies to those in VATER association (vertebral, anal atresia, tracheoesophageal fistula with esophageal atresia, and radial or renal dysplasia) that also is more common in infants of diabetic mothers. Both conditions may occur without diabetic exposure and have low genetic recurrence risks; the more limited hemifacial microsomia has a good prognosis with surgery, but oromotor difficulties and possible salivary gland agenesis may cause early dysphasia and failure to thrive. Anencephaly (Figure D) exhibits hypoplasia of the skull and brain (this photograph and that in Figure C, right were taken by Mason Barr, MD, who founded a pioneering Teratology Unit at the University of Michigan).5 Anencephaly and spina bifida are neural tube defects with increased prevalence in diabetic embryopathy. Their decreased frequency in offspring of women given folic acid before conception and in early gestation is mirrored after similarly timed folic acid administration in gravid women with diabetes.

Diabetes has an approximately 3% incidence in pregnancy, with 0.3% of women having prior diabetes. Women with uncontrolled diabetes in early pregnancy have a 6% to 10% risk for congenital anomalies, a risk that is much higher with more severe diabetes (10% to 11% risk with class E or F diabetic women, 3% to 4% with Class B or C, and essentially background risk for gestational diabetes).1,4-6 There is a general increase in miscarriage, stillbirth, and cranial, cardiac, or caudal anomalies in infants of diabetic mothers. The caudal defects range from sacral and lower limb hypoplasia, including the hypoplastic femur-unusual facies syndrome, to sirenomelia (mermaid anomaly).4 Although diabetes is one of the worst human teratogens, known since the early 1900s, its mechanism of producing birth defects is still unclear, with possibilities including hyperglycemia, excess insulin, ketone bodies, coexisting fetal nutrient deficiencies or, most likely, a combination of those factors.1,4

3. Methotrexate: Figure D. The most likely effect of maternal exposure to folic acid inhibitors such as methotrexate or aminopterin, as with extreme exposures to any teratogen, would be early spontaneous abortion, shown by the frequent use of methotrexate to treat tubal pregnancy.7 Offspring with congenital anomalies will be rare survivors of aminopterin embryopathy because these chemicals inhibit methylene tetrahydrofolate reductase with consequent death of growing cells similar to those in cancers or in the early embryo. As with retinoic acid or diabetic embryopathy, folic acid inhibitors cause brain, vertebral, heart (tetralogy of Fallot), and limb (club foot) defects, and mandate judicious use of arthritis or chemotherapy in women of reproductive age.1,7

4. Mosquito bite: Possibly Figure B. Current concerns about Zika virus often involve microcephaly but brain malformations such as holoprosencephaly, lissencephaly, and cerebellar hypoplasia have now been observed.8-11  Altered brain development to produce holoprosencephaly is around 5-6 weeks postconception, far before maternal placental perfusion at 11-14 weeks, so there may be direct trophoblast rather than blood-born infection.8  The occurrence of 4,000 microcephaly cases in Brazil over the 6 months at the end of 2015 compared to 163 cases annually in the prior 4 years has raised great concern, and the United States Congress is currently debating funding to prevent a potential epidemic.10

5. Phenytoin: Figure E. Small toenails and gingival hypertrophy are typical of fetal hydantoin syndrome, but there is still controversy about whether the 5- to 7-fold increased risk of birth defects from use of anticonvulsants in pregnancy is specific for particular medications.1,12 Anomalies related to gestational phenytoin exposure include mild to moderate cognitive delays, growth deficiency, microcephaly, cardiac defects, genital defects, and the small nails pictured in Figure E. Since there is a 1% prevalence of epilepsy, the potential of birth defects from anticonvulsants or untreated seizures poses considerable dilemmas for management.1

6. Alcohol: Figure A. Fetal alcohol spectrum disorder (FASD) is the most common teratogenic disorder. It has a prevalence of 0.97-1.9 cases per 1,000 live births in the United States and reaches 43 per 1,000 among heavy drinkers.1,13 The children in Figure A show the typical hypertelorism, thin upper lip, and smooth or flat philtrum and (right panel) smaller eyes that become more obvious with age. Children have mild to severe cognitive deficits and a difficult behavioral profile that includes hyperactivity and impulsivity. The dose and duration of alcohol exposure needed to cause FASD is not clear, but the lesser effects of binge drinking compared to chronic, heavy use can be reassuring to women who drink before they realize they are pregnant.1

CONCLUSION: Despite medical recognition and educational efforts, maternal diseases and exposures produce substantial numbers of congenital anomalies. Preconception counsel and pregnancy planning offer tremendous opportunities for prevention through obstetric and pediatric collaboration, and anticipatory care can provide additional benefits to offspring who evade these strategies.1 The illustrated anomalies and the emerging risks from expanding pharmaceuticals and a shrinking world8-11 should underline the reminder from Joffe that women’s health begins in pediatrics.14

Golder Wilson, MD, PhD, is a clinical professor of pediatrics at Texas Tech University Health Sciences Center in Lubbock, Texas, and is a pediatrician and clinical geneticist at KinderGenome Genetics in Dallas.

13. Hoyme HE, May PA, Kalberg WO, et al. A practical clinical approach to diagnosis of fetal alcohol spectrum disorders: clarification of the 1996 institute of medicine criteria. Pediatrics. 2005;11(1):39-47.

Golder Wilson, MD, PhD, is a clinical professor of pediatrics at Texas Tech University Health Sciences Center in Lubbock, Texas, and is a pediatrician and clinical geneticist at KinderGenome Genetics in Dallas, Texas.