An infant was born at 39 weeks of gestation via elective cesarean delivery. There were no complications during the pregnancy or the delivery. The infant’s birth weight was 3,580 g, and the Apgar score was 9 at 1 minute and 9 at 5 minutes. The infant was noted to have ambiguous genitalia (Figure 1) and was admitted to the neonatal intensive care unit. 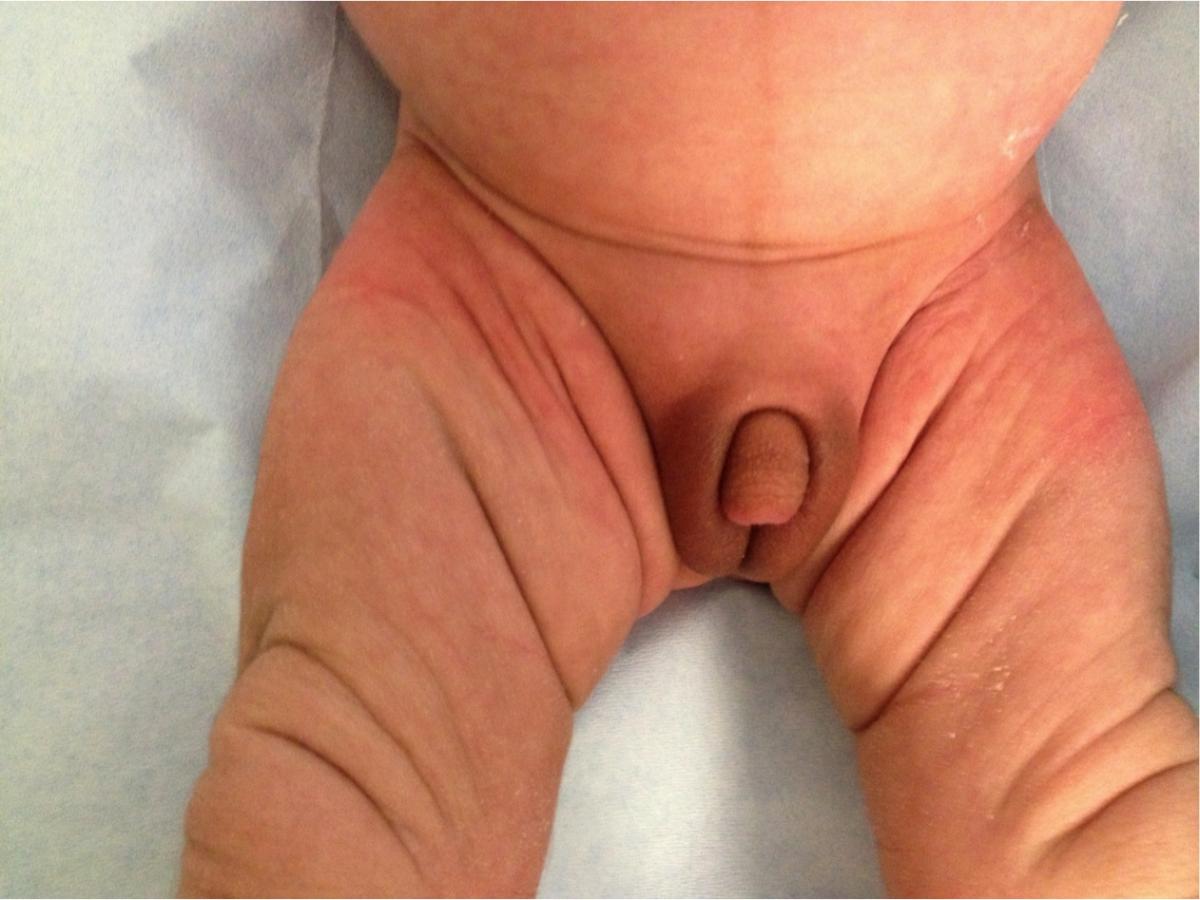 The mother’s only medications during pregnancy had been multivitamins and iron supplements. Before the pregnancy, she had had normal menstrual periods, no acne, and no hirsutism. She is Hispanic. Her family history was significant for a female paternal cousin who had been born with ambiguous genitalia but who subsequently had had a successful pregnancy. There was no family history of menstrual irregularity, infertility, hirsutism, or neonatal deaths. She had 2 other children, a 9-year-old girl and a 7-year-old boy.

On physical examination of the newborn, pertinent findings were confined to the external genitalia, which featured fused, mildly rugose, hyperpigmented labioscrotal folds (Figure 2) but no palpable testes. The phallus measured 2.0 cm in length and 0.7 cm in diameter (Figure 3), with a single opening at the base. This opening was successfully catheterized with a 3.5-French Foley catheter. 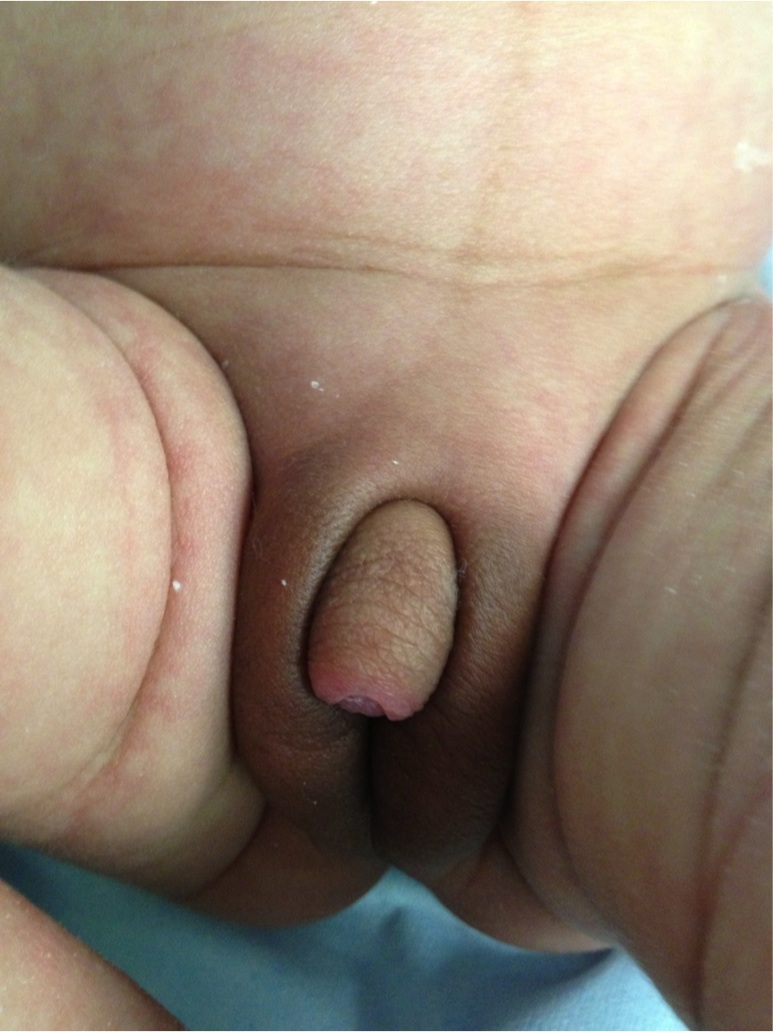 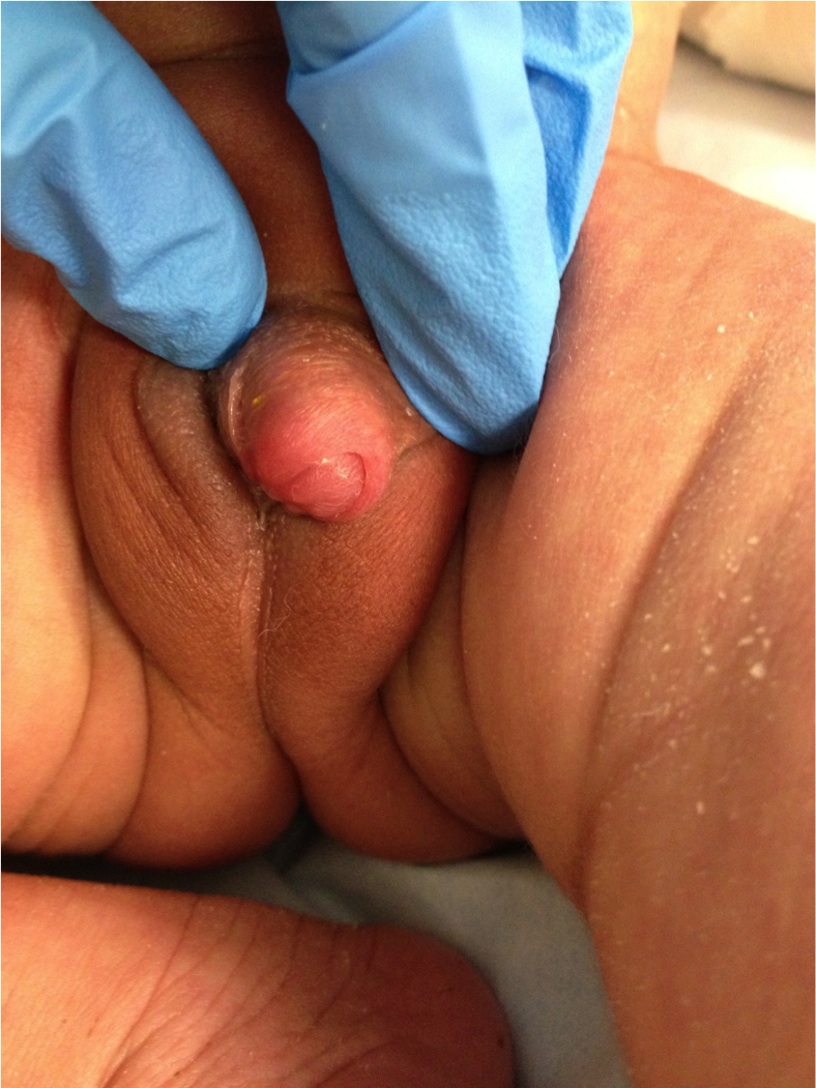 Pelvic ultrasonography results showed a normal uterus and ovaries and no masses in the pelvis or groin region. Serum testosterone was 950 ng/dL (normal in newborn girls is 20-64 ng/dL and in boys is 75-400 ng/dL), and random cortisol was in the acceptable range at 5 µg/dL.

On the infant’s sixth day of life, while results of FISH for SRY, karyotype, and 17-OHP tests were pending, a sodium level of 133 mEq/L, a potassium level of 6.7 mEq/L (nonhemolyzed sample), and a glucose level of 77 mg/dL were noted. Stress-dose hydrocortisone 100 mg/m2/day and 5% dextrose in 0.45% saline were given.

Throughout the hospitalization, the parents were updated about the infant’s status, diagnostic progress, and plans during multidisciplinary meetings.

She was discharged with prednisolone, fludrocortisone, and sodium chloride supplements after the parents had been educated about the diagnosis, precautions, and the treatment plan. The girl is being closely followed up by specialists in endocrinology, genetics, urology, and pediatrics.

The birth of a baby is an exciting event for parents. Friends and families eagerly await the birth announcement, which typically includes the baby’s sex. So when a baby is born with ambiguous genitalia, it can be a difficult and frightening time for parents. Moreover, the presence of atypical genitalia can be a sign of CAH, which is an endocrine emergency that if not monitored closely could decompensate quickly as a result of a lack of mineralocorticoids and glucocorticoids. In such cases, workup should be done urgently to determine the sex and the diagnosis.

Cases of ambiguous genitalia are classified as disorders of sexual development (DSDs),1 which have a broad differential diagnosis. Sex differentiation is the first step in diagnosis. Genetically, males have a Y chromosome with several genes that are involved in sex differentiation: The SRY gene determines the production of antimüllerian hormone in the Sertoli cells in the testes, which then inhibits formation of müllerian structures (eg, fallopian tubes, uterus). Females do not have these genes, and thus müllerian structures develop uninhibited.2

The testes or ovaries form at approximately the fifth week of gestation, and around the sixth week of gestation in males, the testes start producing testosterone from the Leydig cells. Testosterone stimulates differentiation of the internal male organs (the mesonephric or wolffian ducts) to develop into the vas deferens, epididymis, and seminal vesicles. Testosterone then is metabolized by 5α-reductase into its active metabolite, dihydrotestosterone, which stimulates external genitalia differentiation into the penis and scrotum.3 Females develop internal genitalia from unopposed müllerian structures as delineated above, and external genitalia develop when they are not exposed to androgens.

In males, differential diagnosis includes defects in testosterone production, metabolism, or action, or urogenital defects. In females, excessive androgen production resulting from CAH, a defect in metabolism of androgens (eg, due to placental aromatase deficiency), or maternal hyperandrogenism can lead to virilization. In our patient, müllerian structures were present, so the initial workup included karyotyping, assessment of hormones (ie, testosterone, 17-OHP, androstenedione, renin, and DHEA) and assessment of serial electrolyte levels.

The adrenal glands secrete aldosterone, cortisol, and testosterone. Many enzymes are involved in the production of these hormones. Deficiency or malfunctioning of any these enzymes can lead to a buildup of substrate and a deficiency of the final product. Our patient was female with elevated 17-OHP, suggestive of 21-OHD CAH. This defect accounts for about 90% of cases with CAH.5

Early manifestations of CAH in the newborn period result from exposure to excess androgens. Female newborns may present along a spectrum ranging from clitoromegaly to male-appearing external genitalia with cryptorchidism. In male newborns, there are no signs initially; the first presentation is approximately 2 weeks after birth with an acute adrenal crisis (symptoms of poor feeding, decreased activity, vomiting, and poor weight gain, along with signs of dehydration, hypotension, hyponatremia, hyperkalemia, hypoglycemia, and metabolic acidosis).5 Occasionally, male infants present in the late stages of shock or even with death. For this reason, since 2009 newborn screening for CAH has been performed in all 50 states, as well as in at least 12 other countries.8

A multidisciplinary team, including neonatologists, endocrinologists, geneticists, urologists, and social workers, is needed for the management of these patients. During the acute adrenal crisis, support with fluid, electrolytes, dextrose, and stress doses of corticosteroids are necessary. Long-term management includes the replacement of glucocorticoids and mineralocorticoids. Breast milk has low sodium content, so newborns need to receive sodium chloride supplements. Medication doses should be titrated to maintain normal growth and blood pressure. If the glucocorticoid dose is excessive, the growth rate is decreased and the weight is increased. Conversely, if the glucocorticoid dose is inadequate, the growth rate is accelerated, the patient will have early bone fusion, and final height will be compromised. Excess mineralocorticoids can cause elevated blood pressure, and so close titration is needed.9

The presence of ambiguous genitalia is an endocrine and social emergency that requires the efficient determination the sex of the infant and the underlying cause. Detecting salt-wasting CAH before adrenal crisis develops in a newborn is essential. This is more challenging with male infants, since they do not present with ambiguous genitalia. Pediatricians in urgent settings must consider this diagnosis in an ill, decompensated male infant.

Alejandra Gaxiola, MD, is a third-year resident in the Department of Pediatrics at John H. Stroger Jr. Hospital of Cook County in Chicago, Illinois.

Vanessa Davis, MD, is a pediatric endocrinologist and chair of the Section of Endocrinology at John H. Stroger Jr. Hospital of Cook County.