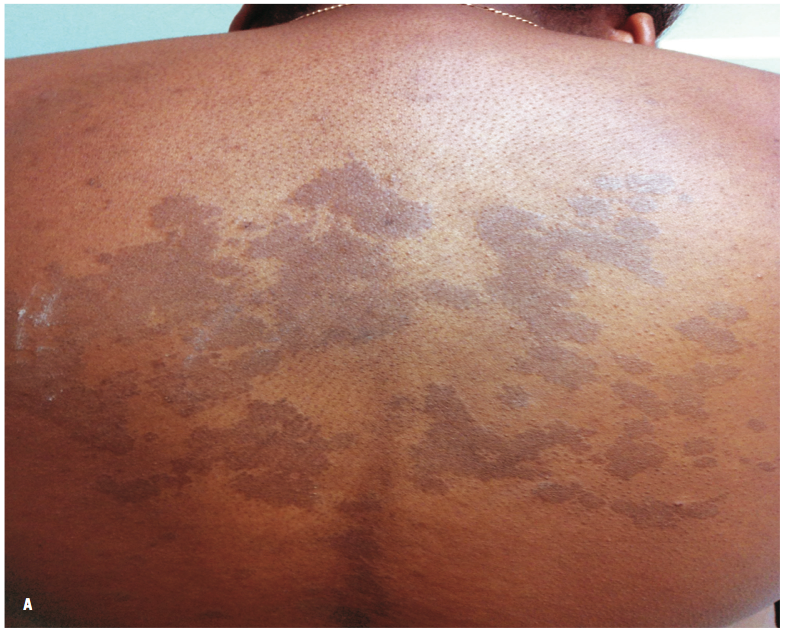 For the past month, a 17-year-old obese African-American girl had right-sided flank pain and a worsening rash on her trunk. The rash first appeared as a small lesion on her right shoulder a year earlier. Since then, the lesions had enlarged and had spread to the back and chest. The patient had associated itching and dryness. Her past medical history was significant for asthma and no other associated illnesses.

During the physical examination, several large hyperpigmented, keratotic plaques of varying sizes were noted on the back, right shoulder, and inframammary area (A and B). The lesions coalesced to form a reticulated pattern peripherally and confluent plaques centrally. Velvety patches of hyperpigmented skin, suggestive of acanthosis nigricans, were also present on the neck.

The patient was initially treated with a topical hydrocortisone cream for presumed eczema with no relief. She was subsequently referred to a dermatologist. Biopsy results were consistent with the diagnosis of confluent and reticulated papillomatosis (CARP).

The etiology of CARP is unclear; however, some suggested causes include an inherent keratinization disorder, an endocrinopathy, a reaction to UV light, a reaction to Pityrosporum, and a genetic factor.3 Clinically, CARP can present with hyperkeratotic papules or patches that coalesce to form a reticular pattern. Common locations for CARP include the torso and inframammary and epigastric regions, with later spread to the neck, axillae, or shoulder regions. CARP spares mucosal surfaces.3 Patients may have associated mild pruritus, although CARP is most often asymptomatic.4 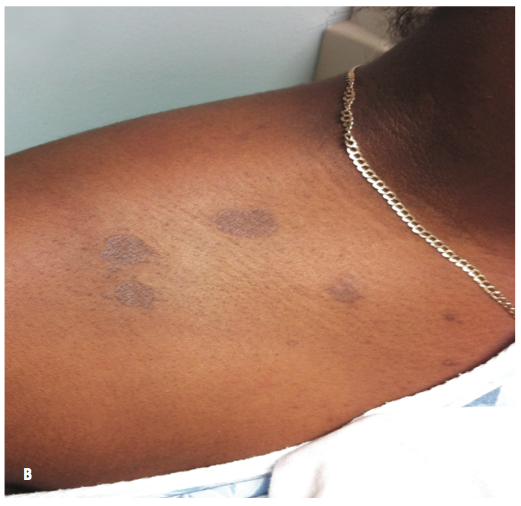 With no widely accepted diagnostic criteria, it has been proposed that the presence of scalene brown macules and patches, some reticulated and papillomatous, on the upper trunk and neck and an excellent response to minocycline point toward the diagnosis.5 In addition, the scales would stain negative for fungi, and CARP does not respond clinically to antifungal treatment.

A variety of treatment modalities have been used for CARP, including antibiotics,6 oral contraceptives, and vitamin A preparations; however, the preferred approach is oral minocycline.7 The hyperkeratotic lesions may also respond to 70% isopropyl alcohol.8

CARP is a chronic disease characterized by exacerbations and remissions. Discontinuation of therapy usually results in recurrence. For this patient, oral minocycline once daily resulted in significant improvement. However, she discontinued the medication after 1 month because of concerns of photosensitivity, and the rash worsened. She is currently evaluating her treatment options.