A 6-year-old boy presented in the emergency department (ED) with difficulty breathing and chest pain. His parents reported that he had been coughing and had experienced fever and nasal congestion for the previous 2 days. On the day of presentation, the boy had started complaining of severe retrosternal chest pain, with shortness of breath.

YOU MAY ALSO LIKE
A Guide to Monitoring and Achieving Asthma Control in Children Younger Than 5 Years
Managing Asthma in Children, Part 1: Making the Diagnosis, Assessing Severity

His past medical history was significant for poorly controlled asthma with a history of daily cough, and for lack of medical follow up with no rescue or controller medications for asthma at home. He had been hospitalized twice in the previous 2 years due to exacerbations. However, he had never been admitted to the pediatric intensive care unit, and he had never received assisted mechanical ventilation during previous admissions. A review of risk factors indicated that the patient had been exposed to second-hand smoke.

On arrival, the boy was alert with severe respiratory distress. His heart rate was 148 beats/min, respiratory rate was 40 breaths/min, and blood pressure was 112/64 mm Hg. He had a temperature of 37.5°C, and his oxygen saturation was 94% on room air.

The results of his physical examination were notable for subcostal, intercostal, and suprasternal retractions, along with subcutaneous crepitus of the neck and thorax. Lung examination results revealed prolonged expiration and diffuse bilateral wheezing. Palpation of the child’s anterior neck and chest indicated crepitus that was suggestive of subcutaneous emphysema.

On auscultation over the chest, a systolic crunching sound was heard, with accentuation during inspiration (Hamman sign). The rest of the boy’s physical examination results were unremarkable. However, a bedside chest radiograph revealed pneumomediastinum (Figures 1A and 1B).

For better delineation of the extent of air dissection, a computed tomography (CT) scan of the chest was obtained, which revealed extensive pneumomediastinum, small bilateral pneumothoraces, pneumopericardium, and pneumoretroperitoneum mostly on the left (Figures 2 and 3).

In the ED, the boy received supportive care with oxygen, frequent nebulized albuterol treatments, and monitoring. He was admitted to the pediatric intensive care unit for close monitoring and supportive care. His hospital stay was uneventful, and he was discharged 2 days later in stable condition. Upon follow up, his physical examination results were unremarkable. 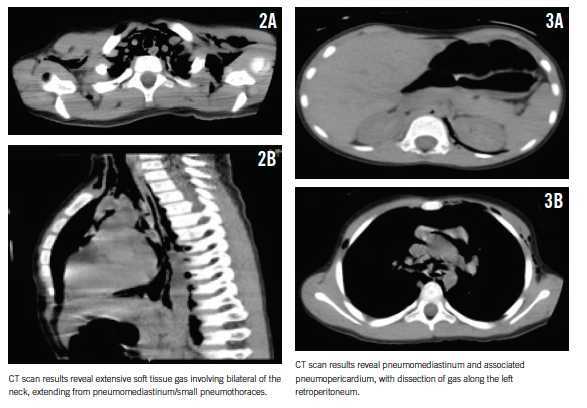 According to the latest report from the Centers for Disease Control and Prevention, 8.6% of the children in United States have asthma, which means there are approximately 6.3 million pediatric patients with the breathing disorder.1 The complications of asthma increase when the condition is poorly controlled and/or misdiagnosed.

Pneumothorax, pneumomediastinum, pneumopericardium, and subcutaneous emphysema are rarely observed complications during an acute asthma exacerbation. One study reported that incidence of pneumomediastinum in children with asthma is 0.3%.2

The pathophysiology of air leakage is described as Macklin effect. High intra-alveolar pressure, which is due to air retention or flow obstruction, leads to rupture of the alveolar base that overlies capillaries. Air enters capillary sheaths and subsequently dissects perivascular sheaths, causing interstitial emphysema, pneumothorax, pneumomediastinum, pneumopericardium, pneumoperitoneum, pneumoretroperitoneum, or pleural trauma.

These clinical conditions usually present with severe respiratory distress and must be promptly diagnosed and treated. Pediatric patients with asthma have rarely been reported with all these complications at the same time. In addition, few case studies have described pneumoretroperitoneum originating from the lungs; most cases are iatrogenic or a result of barotrauma,3-5 and the source of air leakage is located in the abdomen. Prêtre and colleagues reviewed the records of patients with pneumoretroperitoneum in a 10-year period and determined that infection was the most common cause of pneumoretroperitoneum, followed by trauma and iatrogenic causes.5

Vigorous cough before the appearance of subcutaneous emphysema has been reported, and this is common in cases of medical neglect and poorly controlled asthma.6 High intrathoracic pressure up to 300 mm Hg and high velocities of airflow up to 500 miles per hour during severe cough can explain extensive dissection of the tissues in patients with extensive emphysema.7

It is usually recommended to obtain a complete blood cell count and a CT of the chest for any patient presenting with pneumomediastinum. There should be a high index of suspicion to detect any visceral rupture. Clinicians should order a contrast swallow study for patients with emesis, dysphagia, gastrointestinal disease, trauma, hemodynamic instability, fever, leukocytosis, pleural effusion, or pneumoperitoneum.6

Asthma is one of the most common chronic diseases in the pediatric population, and the number of affected children increases every year. Severe asthma exacerbation can rarely result in pneumomediastinum, pneumopericardium, and pneumoretroperitoneum. Most of the reported cases, including our case, are in patients with poorly controlled asthma or with their first asthma presentation.

Our patient had asthma that presented with significant chest pain and severe respiratory distress. He was subsequently found to have extensive pneumomediastinum with air dissection along the aorta and into the retroperitoneal space. This finding is rarely seen in asthma exacerbation but should be considered when chest pain and asthma symptoms are severe following forceful coughing.