A Collection of Conditions With Cardiometabolic Risk

A 69-year-old man presented with a pruritic pretibial rash of 3 months’ duration. The lesions had started as reddish brown papules and had slowly enlarged and changed. The man had had type 2 diabetes mellitus for 10 years and was being treated with metformin, 500 mg twice daily, resulting in fairly good glycemic control. The man was a nonsmoker, and his past health was otherwise unremarkable.

Physical examination revealed several well circumscribed, brownish plaques in the left pretibial area. The borders of the lesions were somewhat raised, a bit firm, and more deeply pigmented than the centers. In some lesions, central atrophy with depression below the level of the skin surface was present (Figure 1). 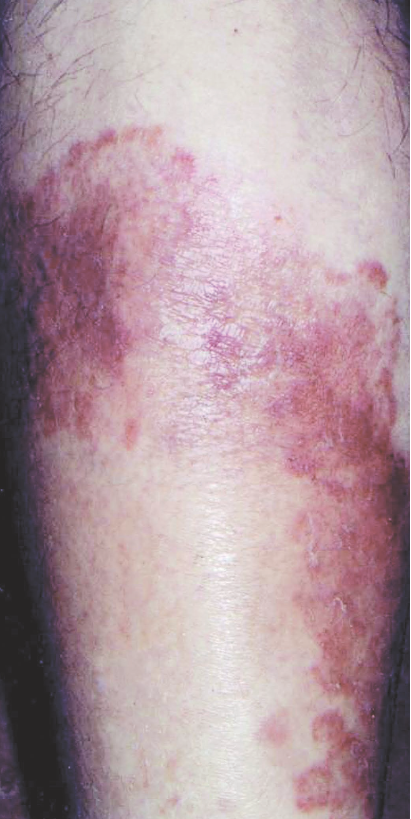 The patient’s shin showed mildly atrophic skin, marked by the paucity of skin lines and an impression that the venous network was unduly prominent beneath the surface, although not dilated. In addition, partial confluence of 2 large circular red-brown lesions was seen, the rightmost “dribbling” down the lateral margin toward the ankle. The rest of the physical examination findings were unremarkable.

The patient received a diagnosis of necrobiosis lipoidica diabeticorum (NLD).

NLD is characterized clinically by ovoid plaques with an irregular, elevated periphery and an atrophic center.1 The condition was first described by Oppenheim in 1929.2 The term necrobiosis lipoidica diabeticorum was based on characteristic histologic findings and frequent association with diabetes mellitus.3

NLD is an uncommon but well-recognized complication of diabetes mellitus, with a prevalence of 0.3% in diabetic adults and 0.06% in diabetic children.4,5 Approximately 75% of persons with NLD have diabetes at the time of diagnosis.6 In others, these lesions precede the diagnosis of diabetes by up to several years.7

A family history of diabetes can be obtained in 90% of affected patients.8 The female to male ratio is approximately 4 to 1. The cause of the sex disparity is unknown.1 NLD usually arises in young or middle adulthood.8,9 Smoking increases the risk of NLD.7 The condition is also more prevalent among persons with thyroid disease, Crohn disease, and ulcerative colitis.6,10,11

Although the etiology and mechanism of development remain unknown, diabetic microangiopathy might be a major underlying cause.4,8 In this regard, persistent microalbuminuria and retinopathy are more common among patients with diabetes in whom NLD develops than among control patients with diabetes who do not have NLD.12 However, this merely could reflect that persistent microalbuminuria and retinopathy imply long disease duration and poor diabetic control: NLD may also be associated with these factors.12,13

To add to the confusion, other groups with severe microvasculopathy—including those with uremic arteriolopathy (calciphylaxis)14—do not characteristically have NLD, nor is NLD typical of some other vaso-occlusive disorders, such as atheroembolic disease,15 vasculitides,16-18 or the lupus “anticoagulant.” Insights about the pathogenesis of NLD are empiric, limited, and imprecise. One struggles to explain why young diabetics are preferentially affected by NLD, whereas older diabetics—precisely those persons with the worst vasculopathy—comprise a lower-risk population.

Immunoglobulins have been found around blood vessels in affected areas. This could suggest an immune complex vasculitis,19,20 except that vasculitis is not seen in biopsy specimens. Focal degeneration of collagen could also be an initiating event.21-23 In one study, levels of lysyl oxidase (which produces collagen cross-linking by the oxidation of lysine and hydroxylysine) were elevated in patients with NLD.21 In another study, overhydration of collagen was demonstrated in the skin of diabetics, but the relationship between hydration of these fibers and NLD is obscure.22

Histologically, the characteristic features include necrobiosis, which is a brightly eosinophilic degeneration of collagen throughout the skin, and infiltration of collagen bundles by palisading histiocytes—a term that describes how they align with the nuclei in a single parallel axis.1,8 The upper dermis contains fatty deposits.1 Mucin deposits are minimal.8 Although NLD is considered a granulomatous and inflammatory disorder, the significance of the histiocytes is uncertain, as is the paucity of more common inflammatory cells, such as lymphocytes or neutrophils.

NLD usually begins as erythematous papules that gradually enlarge, then develop irregular margins, and can coalesce into irregular waxy plaques (Figure 2). The plaques often display a yellowish or reddish brown hue and tend to be sharply demarcated, with raised and sometimes indurated borders that could at least transiently suggest an enlarging skin cancer. Some of the lesions may show central atrophy, telangiectasia, and yellow pigmentation.24 In 85% of cases, the lesion is confined to the pretibial area.4,25 Ankles, feet, calves, and thighs most often are involved, along with the shins in the remainder. In fewer than 2% of cases, lesions are found in other areas but not the legs.22

Figure 2. Another case of NLD, this one in a 30-year-old woman. Here the plaques appear more purely erythematous. They could be misconstrued as traumatic or arising from arthropod bites. One could make such a case by interpreting the tiny pair of ulcers in the center of the lesion to our right as the mark of spider fangs.

Most NLD lesions are asymptomatic. Some lesions are pruritic (as were those in our patient), painful, or dysesthetic.7 Ulceration develops in one-third of cases.26 Ulcers are typically caused by minor trauma; healing is notoriously slow, and not because of any superinfection,26 although terrible-looking infection can occur (Figure 3). Curiously, the ulcerations do not appear to represent simple venous disease superimposed on NLD, although any condition that preferentially affects the shin will make one wonder about venous insufficiency. 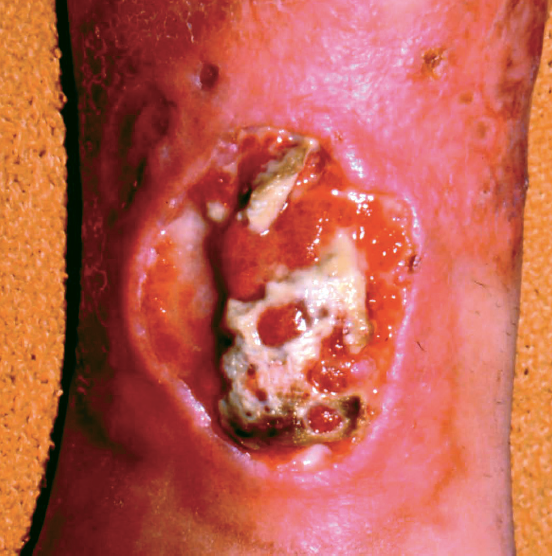 Figure 3. Ulceration had developed in a 30-year-old patient after he experienced trivial abrasion and the ulcerated NLD lesion became infected with staphylococci. The infection produced a significant amount of exudate and some eschar or necrosis at 6 o’clock. The ulcerated areas that are not pus-covered show irregular sculpting, particularly at 3 o’clock, which suggests either destruction with the creation of an irregular surface, or overgrowth of granulation tissue. Paucity of surrounding cellulitis—all the red outside the ulcer is the preexisting necrobiosis lesion—relates to intercurrent appropriate antimicrobial therapy.

NLD lesions are usually self-limited.8 However, they may recur.27 Even in cases that become ulcerated, infection is rare.28 Skin cancers have been reported in chronically ulcerated NLD lesions as in other nonhealing ulcers, but this is very rare.

Because of the unsightliness of NLD lesions and concerns about potential infection or neoplasia, diverse treatments have been tried, without consistent benefit.29,30 These include topical, intralesional, or systemic corticosteroids, topical retinoids, the combination of aspirin and the older antianginal/antiplatelet agent dipyridamole, and even cyclosporin. In one study, all patients in a small group of young and middle aged women with NLD benefited from psoralen and ultraviolet A light.31

(Diabetic Dermopathy on next page)

A 52-year-old man with diabetes mellitus presented for evaluation of an asymptomatic rash on his right leg. The lesions had been present for 2 months. He received a diagnosis of diabetic dermopathy.

Diabetic dermopathy is thought to be a microangiopathic condition that produces asymptomatic, hyperpigmented macules on the shins of persons with diabetes.

Among the conditions in the differential diagnosis are stasis dermatitis, which is not as discrete and erupts on the lower legs; lichen planus, which features purplish plaques; dermatophyte infections, the less pigmented lesions of which are characterized by erythema and scale; and necrobiosis lipoidica diabeticorum, the plaques of which are usually atrophic and organish.

(Arterial Ischemic Stroke on next page)

A previously healthy 15-year-old boy presented to the emergency department (ED) after collapsing and having developed right-sided weakness. He had participated in wrestling practice earlier that evening without incident. At approximately 4 am, he woke up to get a glass of water. Approximately 30 minutes later, his brother found him lying in the hallway. At that time, the boy was unable to move his right side and attempted to communicate with gestures. Prior to collapsing, the patient had experienced a severe headache.

On arrival to the ED, the patient was noted to have lethargy, right-sided facial droop, and diminished strength in his right upper and lower extremities. His pulse was 74 beats/min with a blood pressure of 133/78 mm Hg. He was given a 9-mg bolus of tissue plasminogen activator (tPA) and was started on a continuous intravenous tPA drip. A computed tomography angiogram (CTA) revealed a left internal carotid artery (ICA) dissection with occlusion. Because of concern for a hemorrhagic stroke, tPA infusion was discontinued. The patient was then transferred to a tertiary academic medical center ED.

In the tertiary ED, his vital signs were significant for a blood pressure of 135/75 mm Hg. CTA was repeated and confirmed the partial occlusion of the left ICA. The patient was taken to the operating room by neurovascular surgery for diagnostic angiography, the results of which showed tapering of the left ICA just above the bifurcation of the common carotid (Figure 1). He underwent a mechanical thrombectomy with resolution of the arterial dissection (Figure 2). 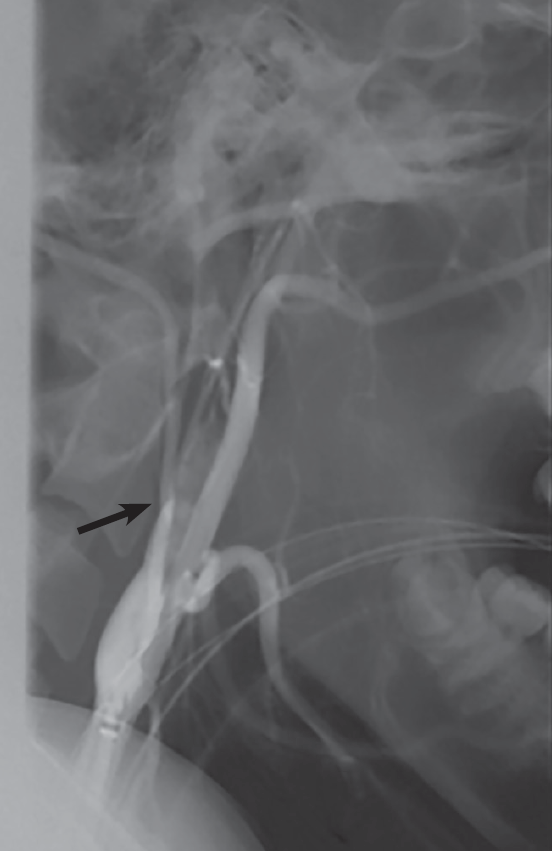 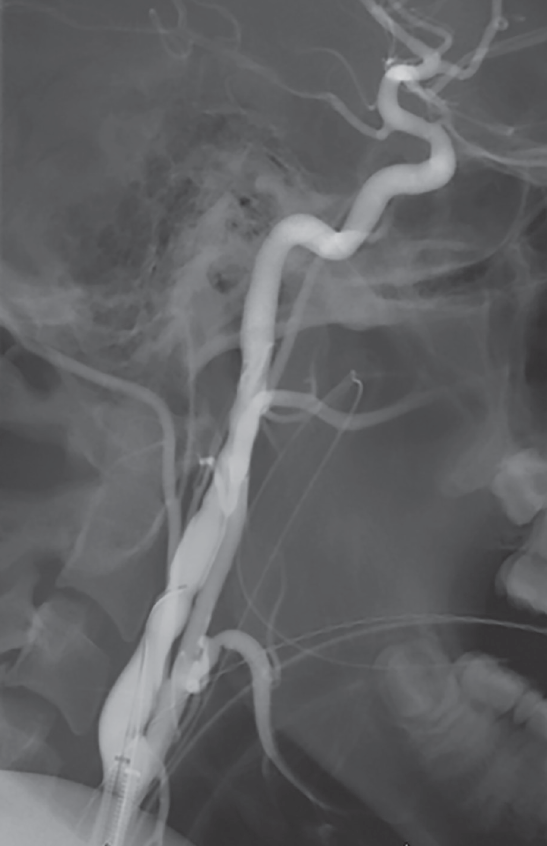 Figure 2. The internal carotid artery was shown on angiogram to be patent after mechanical thrombectomy.

Postoperatively, he was transferred to the pediatric intensive care unit and was started on a heparin drip. During the remaining hospitalization, he was bridged from heparin to daily warfarin therapy. Findings of a medical evaluation for hypercoagulability were negative. He was evaluated by multiple services, including physical medicine and rehabilitation (PM&R), physical therapy (PT), occupational therapy (OT), and speech-language pathology (SLP). At discharge, the boy’s strength returned to baseline, but he continued to exhibit signs and symptoms of expressive aphasia. Follow-up appointments were arranged with PT, OT, SLP, and PM&R.

Arterial ischemic stroke (AIS) is uncommon among children younger than 18 years of age. The annual incidence ranges from 1.2 to 8 per 100,000 children.1 Of those cases, 3% are fatal, and more than 70% of children who sustain an AIS will have chronic disability.1

The International Pediatric Stroke Study,2 enrolling 676 children worldwide, showed that 53% of study participants who sustained AIS had arteriopathies (arterial abnormalities on vascular studies) as a risk factor. Among participants with arteriopathies, arterial dissections were the third leading cause of AIS, having occurred in 20% of that subgroup.

Arterial dissection results from the separation of the arterial layers, thus creating a false lumen. Dissections can occur as a result of trauma or may form spontaneously. Several connective tissue and vascular disorders have been associated with the formation of arterial dissections.3

Carotid dissection, although rare overall, is a frequent cause of AIS among children and adolescents. The current guidelines for management of AIS among pediatric patients (younger than 18 years of age) are based on data extrapolated from adult data. The use of intravenous thrombolytic agents such as tPA is considered experimental given the lack of clinical trials and prospective studies in the pediatric population. However, results of the Thrombolysis in Pediatric Stroke (TIPS) trial,4 a 5-year prospective trial examining the use of intravenous tPA in children aged 2 to 17 years, will be crucial for creating evidence-based recommendations for treating pediatric patients with AIS.