A Collection of Blood Disorder Manifestations

A 77-year-old woman presented with shortness of breath and intermittent left flank pain of 2- to 3-day duration. The dyspnea worsened when she was lying down. She denied chest pain, back pain, and syncope. She has also had mild nonbloody diarrhea of 2 days’ duration but no vomiting or oral intake intolerance.

Physical examination. The patient was in minimal discomfort and was afebrile. Heart rate was rapid and rhythm was irregular. Systolic blood pressure is in the mid-90s mm Hg. Chest showed no signs of trauma. Lung sounds were normal, with no crepitation or clinical evidence of rib fractures. There was a large (about 12 cm x 12 cm), firm, ecchymotic, exquisitely tender mass over the left side of the abdomen (Figure 1); no guarding, rebound, or peritoneal signs were present. After further questioning, the patient reported that she fell in her bathroom a few days prior. 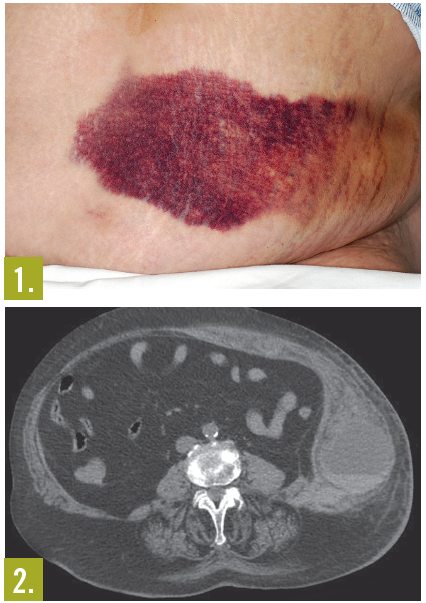 The patient was emergently transferred to the local hospital for further evaluation and management. In the emergency department, intravenous access was established and crystalloid fluid resuscitation was started.

The patient’s blood pressure fell despite this therapy, and type O Rh-negative blood was given while her blood was typed and crossed. Because of high clinical suspicion of an abdominal wall hematoma, coupled with hemodynamic instability and concern about a possible coagulopathy, fresh frozen plasma and vitamin K were also given.

Laboratory tests. Basic blood chemistry, urinalysis, and troponin were normal. Complete blood cell count showed significant anemia, with a hemoglobin level of 7.7 g/dL and hematocrit of 24.3%. Prothrombin time and INR were not available until late into the patient’s clinical course. The laboratory values indicated severe coagulopathy, with the INR being initially incalculable.

A CT scan of the abdomen and pelvis without contrast showed a massive abdominal wall hematoma arising from the left rectus sheath of the lateral abdominal wall with a fluid-blood level (hematocrit sign) consistent with an acute hemorrhage (Figure 2). The bleeding did not intrude into the peritoneal cavity. Although surgery was initially considered, the surgical team recommended reversal of the coagulopathy first.

Discussion. There is a paucity of literature about abdominal wall hematomas, especially those that cause hemodynamic instability in patients who are receiving anticoagulation therapy.1-7 A hematoma can present with apparent bruising and/or tenderness over any aspect of the abdominal wall. Patients with hematomas typically do not have an underlying intra-abdominal pathology.

These patients can be distinguished from those with purpuric illnesses because they usually have a normal platelet count and normal coagulation parameters, unless they have been receiving anticoagulation therapy.

Depending on the amount of bleeding, the patient could have signs of hypoperfusion or shock. As in this case, when a patient who is taking a high-risk medication, such as warfarin, presents in hemorrhagic shock, emergent treatment involves resuscitation and correction of a presumed coagulopathy. If those measures fail, interventional embolization should be attempted. Other therapeutic options are fine-needle aspiration and surgery (ligation of the bleeding vessel).

Differential diagnosis. Idiopathic thrombocytopenic purpura (ITP) is an autoimmune disease that results in rapid destruction of platelets. The diagnosis is typically based on a low platelet count, presence of petechiae or purpura, and no other obvious cause of thrombocytopenia. Patients with ITP rarely present with life-threatening bleeding complications, and they usually do not require treatment. However, those with severe thrombocytopenia may require corticosteroids. If there is no response to medical therapy, the final option is typically splenectomy. This patient’s platelet count was 409,000/µL, which ruled out ITP.

This is usually caused by a failure of breakdown of von Willebrand factor, which causes large platelet thrombi to form and may result in severe end-organ damage. Pregnancy is the most common precipitating event; however, TTP can also be caused by autoimmune disorders (eg, lupus) and drugs (eg, cyclosporine). Affected patients can appear quite ill and require intensive supportive therapy with aggressive plasma exchange.

Vasculitis refers to a large group of disorders that cause petechiae and purpura. These include Henoch-Schönlein purpura, allergic vasculitis, and some infectious diseases (eg, Rocky Mountain spotted fever). Treatment is directed toward the underlying cause.

This patient’s recent fall probably triggered massive bleeding in her abdominal wall because of her hypocoagulability resulting from warfarin therapy. An underlying infectious, allergic, or immunological process was an unlikely cause of her hematoma.

Outcome of the case. In the medical ICU, the patient’s vital signs had stabilized and correction of the coagulopathy was initiated. The INR returned to normal, and there were no further signs of shock; thus, invasive intervention was not required. The patient was discharged within a few days.

(Large B-Bell Lymphoma and Mesenteric Venous Thrombosis on next page)

A 67-year-old woman presented with progressively worsening nasal congestion and headaches with diplopia and left proptosis for 2 months duration. She had been evaluated multiple times for allergic rhinitis and recurrent sinusitis.

Physical examination. The patient had moderate proptosis; extraocular motions of the left eye were restricted in all directions. She had no lymphadenopathy. Oropharynx was visually unremarkable; however, fiberoptic nasopharyngoscopy revealed a posterior superior nasal cavity mass. A contrast CT scan of the head showed a large mass lesion at the level of the ethmoid sinus, eroding into the left orbit and displacing the left globe (Figure 1). 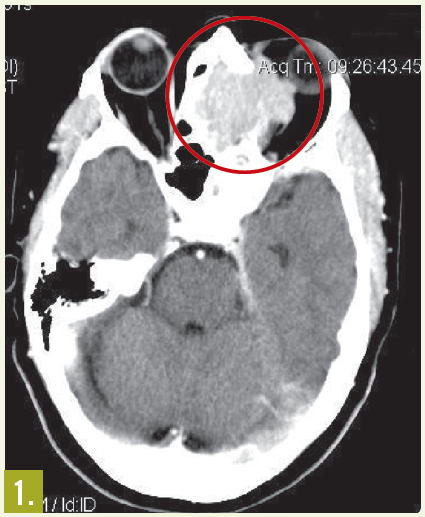 MRI of the head showed a 5.3 cm x 4.2 cm x 4.2 cm enhancing mass at the base of the brain that extended into the nasal cavity, with erosion into the cribriform plate, ethmoid sinuses, and planum sphenoidale.

Discussion. Paranasal and sinus cavity lymphomas are rare presentations of extranodal disease; they represent fewer than 0.2% of all malignant lymphomas1 and only 1.5% of non- Hodgkin lymphomas.2 They usually go unrecognized until advanced symptomatic presentations.

Sinonasal lymphomas are either of B- or T-cell histology; the former represent most cases in the Western hemisphere. B-cell sinonasal lymphomas usually occur in the sinus cavities, where nasal obstruction and discharge, unilateral facial swelling, and pain are frequent early manifestations. T-cell sinonasal lymphomas are more often found in the nasopharynx, typically with more inflammation, fibrosis, necrosis, and vascular invasion. The most common cause of death is disseminated disease, 3 which is more likely in patients with systemic symptoms, such as fever, malaise, night sweats, and weight loss. 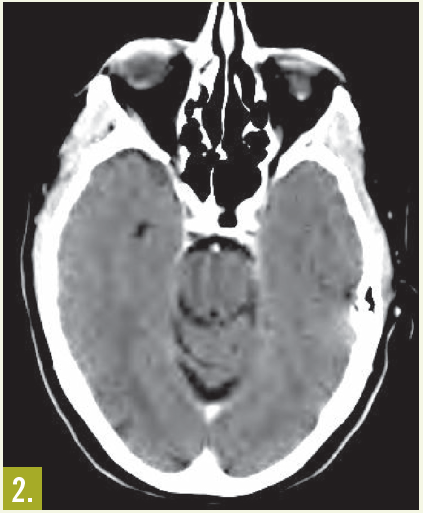 Treatment. Combined chemotherapy and region-specific consolidation radiation therapy followed by intrathecal chemoprophylaxis, typically with methotrexate and/or cytarabine, provides the best chance for overall survival, because this aggressive type of lymphoma poses a direct threat to the skull base and brain. The cure rates are 68% to 82%, similar to those of localized large cell lymphomas in more common sites.4,5 The strongest predictor of outcome is extent of disease at diagnosis, with CNS dissemination common in later stages.

Outcome of the case. In this patient, treatment with rituximab, cyclophosphamide, doxorubicin, vincristine, and prednisone chemotherapy for 6 cycles resulted in excellent clinical and radiological response (Figure 2).

A 63-year-old man with a history of hypertension and gastroesophageal reflux disease presented with progressive, sharp mid-abdominal pain of 3 weeks’ duration. The pain was accompanied by nausea but was not associated with fever, chills, vomiting, diarrhea, constipation, melena, or hematochezia. His symptoms did not worsen with food consumption. Over-the-counter analgesics provided no relief.

Physical examination. The patient was afebrile and hemodynamically stable. He had mild abdominal distention and diffuse tenderness, without rebound or guarding, in the mid-epigastric region. Bowel sounds were hypoactive; no bruits or pulsatile masses were noted. Initial laboratory evaluation and abdominal imaging results were unrevealing. Results of esophagogastroduodenoscopy were negative.

Discussion. Mesenteric venous thrombosis represents 5% to 15% of all mesenteric ischemia cases.1,2 Of these, the superior mesenteric vein is most commonly involved (95%).3 The condition frequently affects persons during the sixth and seventh decades of life.4

Clinical manifestations of mesenteric venous thrombosis are variable and largely depend on the location and extent of the initial thrombus, the duration of intestinal hypoperfusion, and the underlying predisposing condition. Patients classically present with periumbilical pain of sudden onset that is out of proportion to physical examination findings. Additional symptoms may include nausea, vomiting, diarrhea, and hematochezia.

Laboratory studies may reveal leukocytosis, elevated levels of serum lactate, and metabolic acidosis.2 Most of these findings are nonspecific and rarely confirm the diagnosis.

Radiographic imaging confirms the presence of a thrombus. Plain films generally reveal nonspecific changes (such as dilated loops of bowel with air-fluid levels) and can show whether free air is present—a finding that mandates emergent surgical evaluation. Contrast-enhanced CT may demonstrate bowel wall thickening, pneumatosis intestinalis, and vascular occlusions.2,6 Magnetic resonance angiography (MRA) has evolved over the past few years and now rivals conventional angiography. It is possible to visualize the anatomy and determine patency as well as flow rates of the mesenteric arteries and veins with MRA; however, it is less useful in the evaluation of smaller or more distal mesenteric vasculature.6 Conventional angiography is helpful when the presence of thrombosis cannot be confirmed with noninvasive imaging modalities alone or when thrombolytic therapy is used.2,3,6,7

Treatment. The primary goal is to restore intestinal blood flow; however, supportive care in the form of gastric decompression, hemodynamic stabilization, antibiotic administration, and the correction of metabolic disturbances is equally important to a successful outcome. Other goals of treatment are to identify the underlying cause of the thrombosis and to prevent further recurrence.

The high mortality associated with mesenteric venous thrombosis is attributable to delayed diagnosis. For those who receive prompt treatment and lifelong anticoagulant therapy, the prognosis is fairly good.

Outcome of the case. The patient’s status gradually improved with bowel rest, antibiotic therapy, and systemic anticoagulation. He was discharged on hospital day 10 (when he was able to tolerate an oral diet), and lifelong warfarin therapy was started.

The patient denied any family history of thrombotic disease; however, he was ultimately found to be heterozygous for the factor V Leiden mutation.