A Collection of Aids/HIV Related Infections

A 39-year-old woman complained of excruciating pain that radiated from a chronic lesion on the left upper lip to the entire left side of the face. She had AIDS (CD4+ cell count, 68/µL; HIV RNA level, >750,000 copies/mL) but was not receiving antiretroviral therapy. The lesion first appeared as a blister, which ruptured after it was struck by a toy thrown by her son. It enlarged and became more painful despite antibiotic therapy and a 1-month course of valacyclovir. During this period, she had no fever. She used marijuana and alcohol for pain control.

The patient grew up in Puerto Rico and had been in prison there. There was no history of tuberculosis. She had a pet dog. 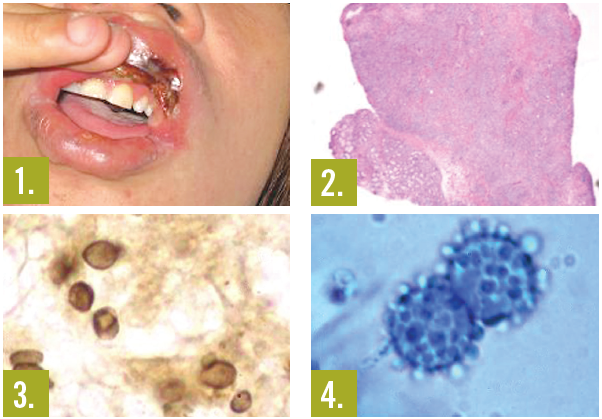 Physical examination. The patient was afebrile, with a blood pressure of 130/70 mm Hg, a heart rate of 88 beats per minute, and a respiration rate of 12 breaths per minute. The sclerae were anicteric. There was a perioral ulcer with significant swelling of the left upper lip. No oral candidiasis was seen. She had torus palatinus and an enlarged left submandibular gland with mild cervical and axillary lymphadenopathy. There were no other skin lesions and no genital lesions.

Discussion. H capsulatum exists in a yeast form at 37ºC (98.6ºF) and as mycelium at 25ºC (77ºF) to 30ºC (86ºF).1 This dimorphic soil fungus is endemic in the central and southeastern United States, in Puerto Rico, and in regions of South America. Infection results from inhalation of spores found in the excreta of pigeons and other birds and bats and in chicken coops.1

The disease is usually classified as acute pulmonary, chronic cavitary, or disseminated.2 Disseminated disease can occur in persons who are very young, very old, or immunocompromised (such as those with HIV/AIDS). It has been observed in persons living in the United States who had previously lived in regions where H capsulatum is endemic. Some speculate that the disease in these patients may be caused by reactivation of quiescent infection.3

Outcome of the case. The patient was treated with intravenous amphotericin B for 1 week followed by oral itraconazol. After 2 weeks, the lip lesion had completely healed, the facial pain had resolved, and the urine Histoplasma antigen level had decreased to 14.7 EIA units. Itraconazole was continued for 2 more weeks, and the patient was asked to return for antiretroviral therapy. Unfortunately, she was lost to follow-up.

A 25-year-old homosexual man with AIDS presented with generalized papular, erythematous, nonpruritic, hyperpigmented lesions that had appeared on his face, arms, chest, and abdomen during the previous month. During a physical examination, the physician also noted purple-red, nodular lesions in the right conjunctiva and oral cavity, especially the lower gingiva. Other pertinent physical findings included facial edema and hepatosplenomegaly.

Biopsy of the gingival lesion showed whorls of spindle-shaped cells and leukocytic infiltration and neovascularization, with aberrant proliferation of small vessels; these findings were consistent with Kaposi sarcoma. The lesions initially responded to treatment with liposomal doxorubicin, but they reappeared after the patient became noncompliant with therapy.

Diagnostic studies. Four months after the initial diagnosis, the patient was hospitalized for dyspnea. At that time, a CT scan of the chest showed extensive pulmonary nodules with fluffy, ill-defined margins. A CT scan of the abdomen revealed an enlarged liver with multiple attenuated foci. Liver biopsy was contraindicated because of severe thrombocytopenia (platelet count, 5000/µL). Idiopathic thrombocytopenic purpura was diagnosed based on the results of a bone marrow aspiration, which revealed an increased number of megakaryocytes, and a bone marrow biopsy, which showed normal marrow cellularity without evidence of hypoplasia or increased fibrosis. Hypoxemic respiratory failure, intractable hypotension, and coagulopathy subsequently developed, and the patient died.

Discussion. Kaposi sarcoma is 15 times more frequent in men and appears to be more common in homosexual or bisexual men.1,2 This low-grade vascular tumor is associated with human herpesvirus 8 infection. AIDS-related Kaposi sarcoma is the most common form in the United States.2 The course is variable and ranges from minimal cutaneous disease to an explosive generalized form that involves the oral cavity and the GI and respiratory tracts.

Although a presumptive diagnosis of Kaposi sarcoma can often be made clinically, the confirmatory test is a biopsy. The differential diagnosis includes bacillary angiomatosis, hemangioma, purpura, dermatofibroma, pyogenic granuloma, and hematoma. 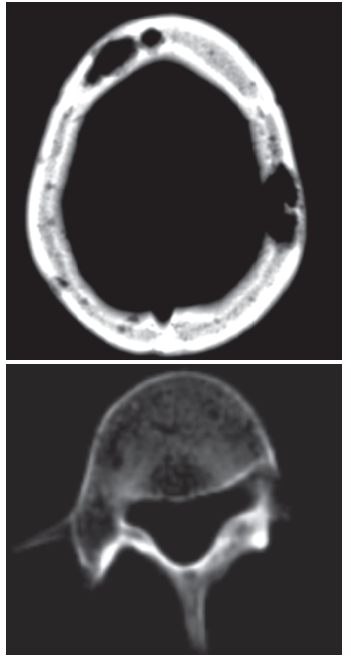 A 39-year-old man with a history of AIDS and nonadherence to highly active antiretroviral therapy (HAART) presented with frontal headache and scalp pain of 2-weeks duration. These symptoms were accompanied by nausea, weight loss, and generalized weakness. Physical examination revealed a small, tender scalp lump, 2 cm × 2 cm over the left parietal area. The findings from the rest of the examination were unremarkable.

On the fourth day of hospitalization, he had severe bone pain, vomiting, and lethargy. There was progressive increase in the serum calcium level, which reached a maximum of 14.5 mg/dL on the seventh day. The patient was hydrated and treated with furosemide, calcitonin, and pamidronate (with good clinical response).

Discussion. Hypercalcemia is a common metabolic emergency but is an unusual complication of disseminated MAIC infection in a patient with AIDS. MAIC causes disseminated infection in immunocompromised hosts when the CD4+ cell count is less than 50/µL. Hypercalcemia can be a result of immune reconstitution syndrome in HIV-infected patients receiving HAART.1 Other findings indicate that hypercalcemia in AIDS-associated MAIC infection is attributable to inappropriately elevated 1,25-dihydroxyvitamin D.2-4

Kaposi sarcoma or Mycobacterium haemophilum infection can lead to lytic lesions in bones.5,6 However, MAIC infection as a cause of lytic bone lesions has not been described. Further studies are needed to verify whether lytic lesions explain hypercalcemia in disseminated MAIC infection in persons with HIV in the absence of elevated vitamin D levels. 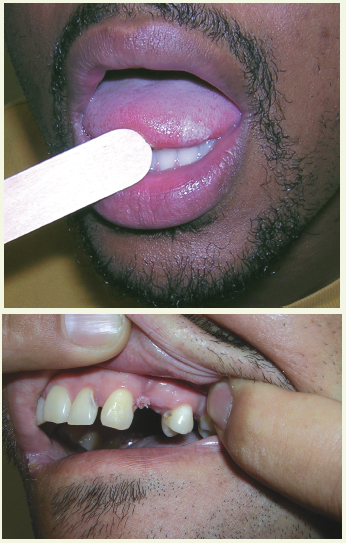 A 30-year-old man with a 15-pack a year smoking history presented for a follow-up evaluation of an asymptomatic whitish lesion on the tongue of 4 months’ duration. The lesion had not responded to oral therapy with either nystatin or fluconazole. The patient was distressed about the lesion’s appearance and his inability to remove it with a toothbrush.

Physical examination. Multiple, nontender, whitish, vertical striations were noted along the right lateral edge of the lesion. No ulcerations, vesicles, verrucae, fissures, or exanthemas were visible in the oral cavity; there was no evidence of bleeding or exudates. The physical findings were otherwise unremarkable.

Diagnostic studies. A presumptive clinical diagnosis of oral hairy leukoplakia was made, and an HIV test was ordered. Histological examination of a biopsy specimen of the lesion revealed hyperkeratosis and koilocytosis without inflammation.

Results of the HIV test were positive. The CD4+ cell count was 312/µL (HIV RNA level, 27,000 copies/mL). Oral acyclovir was started, and the lesion resolved by the end of the third week of treatment.

Discussion. Oral hairy leukoplakia is the classic intraoral lesion of HIV/AIDS. This entity generally manifests as a unilateral or bilateral adherent grayish white or yellowish white patch on the lateral margins of the tongue. These patches may appear as irregular folds or projections and often have a corrugated surface. The lesion can also occur on the ventral surface of the tongue but is typically flat in this region.2,3 Other possible locations include the floor of the mouth and the buccal mucosa. The lesions are usually asymptomatic, although occasionally patients may complain of soreness or burning.

Oral hairy leukoplakia is thought to be mediated by the intense replication of the Epstein-Barr virus (EBV) and is fairly specific to the immunodeficient state caused by HIV disease. However, it has also been described in patients who are immunocompromised because of organ transplant or autoimmune disease and very rarely in those who are otherwise seemingly healthy. Oral hairy leukoplakia is almost exclusively seen in men who have sex with men. Its presence is generally a sign of moderate to severe HIV disease (with CD4+ cell counts of less than 300/µL) and can be considered a clinical marker for disease progression. AIDS can be expected to develop in up to 30% of such patients within 3 years.4,5

A presumptive clinical diagnosis can be made by the history and physical examination. A thorough medical and social history will often reveal the cause of immunosuppression. Unlike candidal infection, the lesions cannot be scraped off and are also unresponsive to antifungal therapy. When the diagnosis is unclear, a biopsy can be performed. A more definitive diagnosis can be made by in situ hybridization of EBV DNA.3

Treatment. Oral hairy leukoplakia has no malignant potential. It is generally not treated unless the patient experiences interference with speech, taste, or chewing or requests treatment for cosmesis. The disorder responds to topical retinoids or podophyllin. Oral antiviral agents, including acyclovir, zidovudine, ganciclovir, and foscarnet, may also be effective. Relapses are common once treatment is discontinued. The lesions also respond favorably during the course of highly active antiretroviral therapy, as the CD4+ cell count rises.3 Patients should be instructed to comply with regular dental and medical care regimens.