Coarctation of the Aorta: A Neonate With a Systolic Murmur but With No Other Symptoms

We describe the case of a newborn who was completely asymptomatic, with normal results on CHD screening tests, normal femoral pulses, and normal perfusion, but with a significant systolic murmur. The infant received a diagnosis of critical aortic coarctation based on the results of echocardiography, which had been done to assess the persistent murmur.

A boy was born at 40 weeks of gestation to a 28-year-old, gravida 3, para 2 mother. No medical complications had occurred during the pregnancy, although mother admitted having occasionally used alcohol and marijuana early in the pregnancy. The results of all prenatal ultrasonography examinations were reported to be normal, and all the prenatal laboratory test results were normal except for group B streptococcus. The mother did not receive antibiotics, because she had not experienced rupture of membranes or labor.

The boy was born via cesarean delivery secondary to nonreassuring fetal heart test results, noted at the obstetrician’s office. The neonate’s Apgar score was 9 at 1 minute and 9 at 5 minutes. The baby’s weight was 4.18 kg (large for gestational age), length was 52 cm, and head circumference was 37 cm.

The boy was examined by a pediatrician at 3 hours of age and was noted to have a grade 3 systolic murmur at the lower left sternal border. The infant had good peripheral pulses, including femoral pulses, and good perfusion. No dysmorphic features were noted. The infant did not have any signs of respiratory distress, and was active, alert, and feeding well.

Because the murmur persisted, echocardiography was done at 62 hours of life, the results of which showed severe CoA with wide separation of the aortic arch branches and mild hypoplasia of the aortic arch (Figure). The patent ductus arteriosus (PDA) was small, with a left-to-right shunt.

The infant was transferred immediately to a tertiary care facility, where he was continued on prostaglandin infusion therapy for 7 days and then had open-heart surgery with repair of the CoA, resection, anastomosis, and patch augmentation of a hypoplastic aortic arch. PDA division and ligation also was performed.

The patient’s postoperative course was complicated by bilateral vocal cord paresis and severe gastrointestinal reflux. Initially, he was fed through a gastrostomy tube, but he tolerated oral feeding after having undergone a Nissen fundoplication. 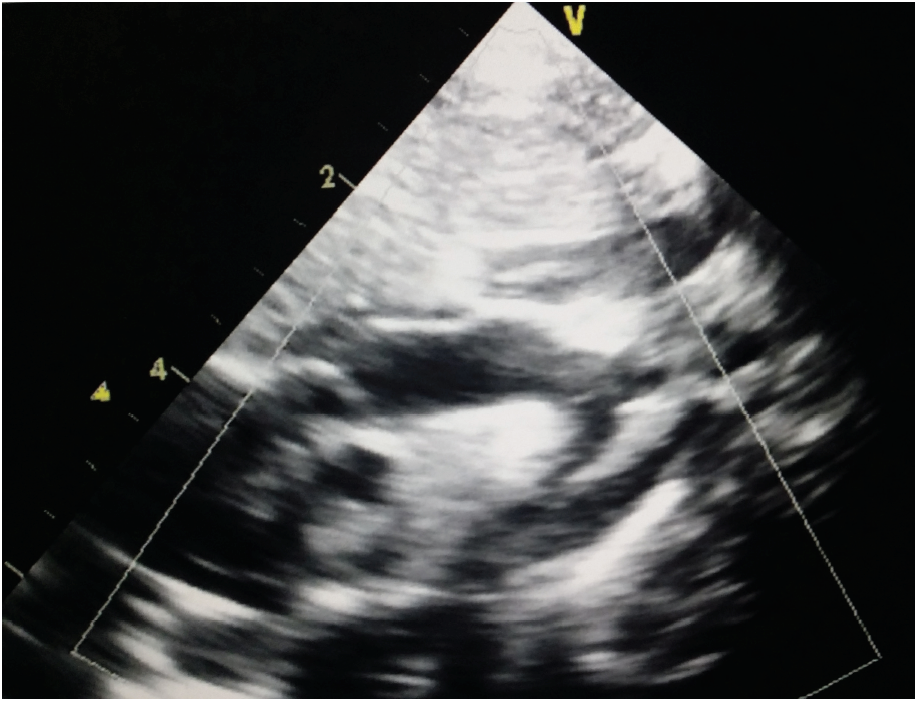 CoA may be missed in newborns because of the low sensitivity (32%) of the neonatal screening examination.5 Moreover, cardiac symptoms may not develop before 48 hours of life and closure of the PDA.2,6 Other factors contributing to a delay in diagnosis include clinicians’ lack of familiarity with the clinical manifestations of CoA.

Suspected CHD is a medical emergency. One retrospective cohort study of 898 infants who died of critical CHD found that in California alone, as many as 30 infants die each year as a result of a missed or late diagnosis of critical CHD.2 More than half of the infants died at home or in the emergency department; CoA and hypoplastic left heart syndrome were the most commonly missed diagnoses and were associated with the highest mortality.2,3

Early diagnosis of CoA reduces morbidity and mortality from heart failure7 and is critical for the proper timing of therapeutic interventions. The repair of CoA during early childhood is associated with a lower incidence of systemic hypertension and improved long-term outcomes.8-10

Infants may be asymptomatic until closure of the ductus arteriosus. After closure, detectable physical signs (hypertension and/or abnormal femoral pulse) of coarctation develop by 5 days of age, and almost half of affected children will develop severe symptoms before 14 days of age.6 Infants may develop poor feeding, tachypnea, cool legs and feet, and paleness or gray skin discoloration. These signs may reflect heart failure and cardiogenic shock.11 A retrospective study of 165 infants in Mumbai, India, with CHD found that the commonest symptoms were breathlessness (75%), lower respiratory tract infections (45%), and failure to thrive (39%).12

CoA may cause faltering growth because of breathlessness (causing poor feeding and low energy intake) and, in some cases, high-energy requirements (causing insufficient energy for normal growth).13 Older children and adults may have exercise intolerance; symptoms of poor perfusion such as leg fatigue, cold feet, and claudication; headache (resulting from hypertension); and symptoms of heart failure.11

A harsh systolic murmur (often absent in newborns) over the left sternal border indicates a 54% chance of an underlying cardiac malformation.14 Weak or absent femoral pulses are found in 92% of infants with CoA, and upper limb hypertension has been found in 97% of infants with CoA15; a systolic blood pressure that is 20 mm Hg higher in the arms than in the legs is evidence of CoA (specificity, 92%).16 However, a negative finding on the 4-limb blood pressure measurement does not exclude the condition.16

Pulse oximetry in the feet can detect 92% of duct-dependent CHD (CoA, transposition of the great arteries, and hypoplastic left heart syndrome), and it has very low false-positive rate.17 In addition, pulse oximetry is easy to use, reliable, and cost-effective.17

The initial treatment, after resuscitation of the neonate, is the administration of prostaglandin to reopen the arterial duct.20 This usually leads to stabilization and often is used in conjunction with intensive-care support. Surgical repair usually is done within a few days of presentation. In older children, hypertension is controlled after surgery, with β-blockers, angiotensin-converting enzyme inhibitors, or angiotensin receptor blockers as first-line medications.

Stent insertion at cardiac catheterization has become the treatment of first choice in older children and adults. This intervention is most appropriate in the presence of a localized narrowing at the site of the coarctation, rather than the presence of a hypoplastic arch, which might require surgery.21