Clues to the Cause of a Teenage Athlete's Lower Leg Pain

Dr Agrawal is a radiology resident and Dr Kizilbash is a pediatric hospitalist at Wayne State University School of Medicine in Detroit. 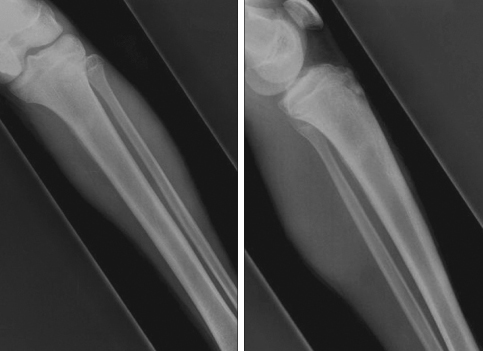 A 14-year-old soccer player presents with pain in his left lower leg of 4 weeks’ duration. The pain is constant, although initially it occurred only while playing. He denies any fever or significant trauma. On further questioning, he reveals that he has been staying late at practice to increase his chances of winning a scholarship.

Examination reveals point tenderness of the bone below the left knee. No soft tissue swelling or erythema is noted.

Anteroposterior and lateral views of the tibia and fibula are shown

To which of the following conditions do the findings point?

Stress fractures are among the most common overuse injuries and represent the bone’s inability to repair itself adequately in the face of repetitive microtrauma. The most commonly affected sites are the tibia, followed by the patella, fibula, metatarsals, tarsal navicular, and femoral neck. Upper extremity lesions are relatively infrequent; of these, the ulna is most frequently affected. Stress fractures occur more often in young athletes, whereas patellar tendonitis, knee bursitis, and iliotibial band syndrome are more common in older athletes.

Patients with stress fractures typically present with bone pain that is incited by physical activity. The pain initially can be relieved with rest; it becomes persistent as the fracture progresses. Examination reveals localized tenderness of the bone. The fracture may be apparent if the radiograph is obtained within a few days of the injury. Radiographs obtained 2 to 4 weeks after the injury typically show evidence of the fracture (eg, new bone formation/periosteal reaction and sclerosis), as in this patient. This is because stress fractures are usually incomplete and nondisplaced. Thus, if initial radiographic findings are normal but there is high suspicion for sports-related injury, obtain a second set of radiographs within 1 to 2 weeks. Bone scintigraphy is sensitive but lacks specificity. MRI has emerged as the gold standard for definitive diagnosis of stress fracture and must be pursued when clinical suspicion is high and a second set of radiographs show normal findings. MRI may also be helpful to rule out other causes for the symptoms.

The diagnosis of a stress fracture in an athlete should alert the clinician to the possibility of an underlying predisposing bone condition, such as osteoporosis or hyperparathyroidism, or an eating disorder, which may lead to nutritional deficiencies and low bone mineral density. The differential diagnosis includes osteomyelitis and an infiltrative neoplasm. Female gender and amenorrhea are commonly described as risk factors. Anatomical variations, such as leg length discrepancy and foot anomalies, also increase the risk. However, the strongest risk factor for stress fractures is an abrupt
increase in the intensity of training.

Management of stress fractures revolves around elimination of microtrauma by activity restriction coupled with muscle strengthening exercises to attenuate the stress on the bone. Malunion, nonunion, and fracture displacement require operative intervention. Anterior tibial shaft fracture and femoral neck stress fracture frequently require operative intervention because of the high risk of complications. Athletes are generally able to return to play within 8 to 12 weeks. A decrease in pain and radiologic evidence of new bone formation are needed before resumption of sports activities. ■