A 15-year-old boy presented to Shriners Hospital for Children in Houston, Texas, for evaluation of a bump on his left leg. He stated that the bump had been enlarging for the past 3 years. He denied any trauma, pain, redness, or generalized swelling in the leg.

His past medical history was noncontributory. His past surgical history included removal at age 6 years of an unknown foreign body from the left knee after he had fallen from a tree. His immunizations were up to date, and the result of a recent purified protein derivative (PPD) test for tuberculosis (TB) was 0 mm.

Family history was pertinent for TB in his paternal grandmother, who had been hospitalized for treatment. She had had no contact with the patient, however. The boy’s father had had a positive PPD test result, but he had been told that it was a false positive due to his having received a childhood BCG vaccine. The father was asymptomatic and had received no treatment; it was unknown whether he had undergone chest radiography. The patient’s mother, his 16-year-old brother, and his 9-year-old brother had negative PPD test results.

The review of systems was positive for a 7-year history of limping, which had been attributed to pelvic obliquity and spina bifida occulta. A ¾-inch shoe insert had been recommended for the shorter right side, but he had found it too uncomfortable to wear. He denied night sweats, weight loss, fever, headache, and cough. 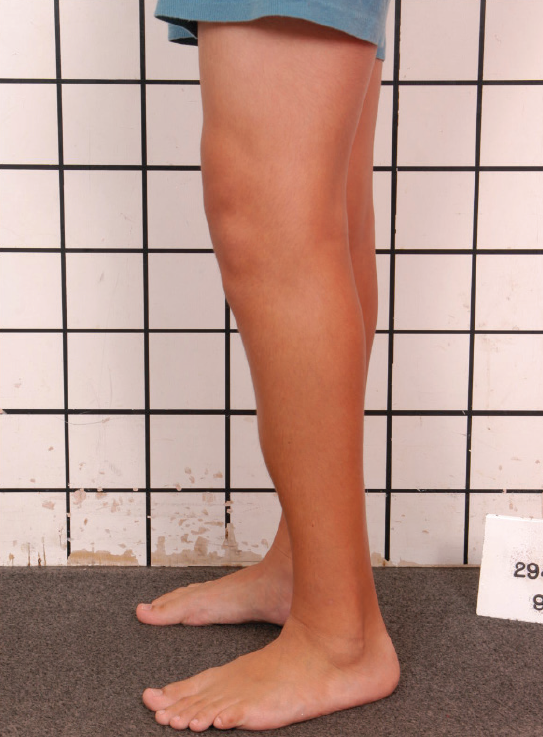 Figure 1 – A 15-year-old boy presenting for evaluation of a mass on his left tibia had a leg length discrepancy, with the left longer than the right, attributed to pelvic obliquity and spina bifida occulta.

On physical examination, his weight, height, and body mass index were in the 97th percentile, the 50th to 75th percentile, and the 95th percentile, respectively. Pertinent findings included a well-healed, 4-cm scar over the medial aspect of the left knee, and a 4 × 5-cm, palpable, nonmobile, hard mass on the anterior aspect of the left distal tibia. It was not tender, warm, or erythematous (Figure 1). The left leg was longer than the right leg. The remainder of examination findings was unremarkable.

A radiograph of the left leg revealed localized cortical thickening on the anterior midshaft of the tibia, within which were multiple areas of radiolucency (Figure 2). Results of chest radiography were normal. Laboratory results revealed a white blood cell count of 6,100/µL, a hemoglobin level of 14.2 g/dL, a hematocrit of 40.6%, an erythrocyte sedimentation rate (ESR) of 24 mm/h, and a C-reactive protein (CRP) level of 1.66 mg/dL. No immunologic testing was performed. He underwent open biopsy and culture of the tibial lesion. 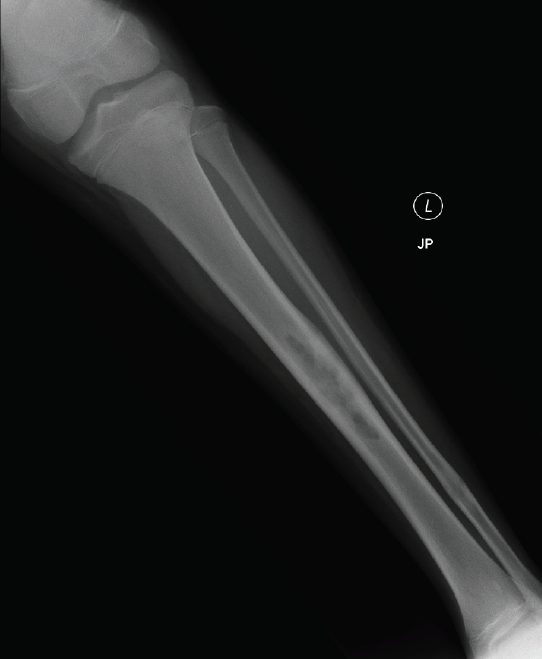 Figure 2 – Multiple areas of radiolucency on a radiograph of the boy’s left leg indicated cortical thickening on the anterior midshaft of the tibia.

The patient’s differential diagnosis included neoplastic and infectious etiologies. Because of the prolonged history of the lesion, benign lesions or slow-growing malignant lesions were considered more likely. The radiography findings suggested fibrous dysplasia, osteofibrous dysplasia, adamantinoma, osteoid osteoma, and osteoblastoma, but infectious etiologies could not be excluded.

Fibrous dysplasia is a noninherited congenital skeletal disorder resulting from a mutation in the gene that encodes the α subunit of the G protein, which is involved in the production of cyclic adenosine monophosphate (cAMP). The resulting overproduction of cAMP leads to stimulation of osteoblasts and fibrous lesions in the bone, which could explain our patient’s lesion and his leg length discrepancy. The diagnosis usually is made by radiography, but bone biopsies may be required. Magnetic resonance imaging does not provide a characteristic appearance of fibrous dysplasia and thus is a less useful imaging modality.1

Adamantinoma is a rare, low-grade, malignant primary bone tumor that occurs most often in the tibia and/or fibula of adolescents or young adults. On radiographs, it usually appears as a mixed lytic and sclerotic central lesion or as multiple, sharply circumscribed lucencies with sclerosis of the intervening bone—precisely the age of our patient and the location and characteristics of his lesion.

Osteoid osteoma is a benign bone tumor characterized by a nidus of osteoid tissue surrounded by dense reactive bone. It accounts for approximately 10% of benign bone tumors and has a male to female ratio of 3 to 1. Our patient denied the most common symptom—a dull, aching pain in the affected area that is worse at night and is relieved by aspirin. He did have a limp but had no muscular atrophy.

An osteoblastoma, sometimes called a giant osteoid osteoma, is histologically identical to osteoid osteoma but is larger. It accounts for less than 1% of primary bone tumors. The pain is less intense and is not relieved by aspirin. The lesions are tender, and direct palpation can localize a lesion even when it cannot be seen. These lesions were not present in our patient.

Because of our patient’s long history of symptoms, any infectious etiology most likely would be chronic. Causes of chronic osteomyelitis include infection with Actinomyces species, fungi, or mycobacteria. The most common fungal causes of osteomyelitis are coccidiodomycosis, blastomycosis, histoplasmosis, nocardiosis, cryptococcosis, and aspergillosis. These infections should be considered only in geographically endemic areas or with specific exposure to the fungus. Osteomyelitis caused by Actinomyces usually is present in the cervicofacial, thoracic, and abdominopelvic areas and may be characterized by “draining granules” of a greenish, yellow, nonodorous pus.2

While pulmonary TB is the most common presentation of TB, skeletal TB accounts for 4% of extrapulmonary disease.3 Osteomyelitis caused by TB may take 1 to 3 years to manifest after initial infection. This timeline is consistent with that of our patient. The questionable TB status of the patient’s father also is concerning.

Infection with nontuberculous Mycobacterium avium and Mycobacterium intracellulare also has a similar presentation; because these 2 organisms are difficult to differentiate, they are grouped as a M avium complex (MAC).4 Both species can be found in birds, soil, dust, and fresh or salt water. MAC infections are more common in children who are immunocompromised and rare in immunocompetent children.

Chronic osteomyelitis from nontuberculous mycobacteria is rare. When it does occur, M intracellulare is the organism most commonly isolated. Skeletal infection with MAC most often is a result of a direct inoculation of the pathogen from an environmental source via surgery, penetrating trauma, or, as with our patient, a puncture wound.8,9 Most affected patients are immunocompetent.9

Chronic osteomyelitis can present with such symptoms as low-grade fever and swelling, intermittent drainage, and pain in the involved extremity, none of which our patient had. X-ray films may reveal bone destruction and/or new bone formation, but the definitive diagnosis is made with bone biopsy and culture.

Ten days after biopsy and culture of our patient’s lesion, acid-fast bacilli smear results were positive; 15 days later, the culture was positive for MAC. He was referred to the TB clinic at the University of Texas Health Science Center at Houston and was prescribed a 6-week course of intravenous amikacin and a 12-month course of oral azithromycin, ethambutol, and rifabutin for chronic osteomyelitis. Monthly ESRs and CRP levels were obtained; both values returned to normal levels after 9 months of therapy. At that time, the patient underwent distal and proximal left tibial epiphysiodeses to improve his leg length discrepancy.

Chronic osteomyelitis should always be among the differential diagnoses in cases of a slow-growing bone mass. Although radiographic findings may aid in the diagnosis, a biopsy of the lesion should always be part of the workup. Most importantly, consider sending the biopsy specimen for culture for mycobacteria and fungal organisms.