DIFFERENTIATING BETWEEN COPD AND ASTHMA

Characteristic COPD symptoms include dyspnea, chronic cough, and sputum production.1 These symptoms also may be present in patients with asthma, albeit with greater variability.7 Several clinical features can help distinguish COPD from asthma (Table 1),1 although these distinguishing features are not absolute. Fixed airflow obstruction is a defining feature of COPD, but airway remodeling occurs often in asthma and may lead to a fixed component of airflow obstruction in some asthma patients.7 In particular, patients with longstanding asthma may demonstrate irreversible airway obstruction,1 and some patients with asthma may have a pseudo-emphysematous pattern.8 While atopy is very common in asthma,1 some COPD patients also have atopy.9 Although smoking is the most common cause of COPD,1 10% to 15% of patients with COPD have never smoked.10 While inflammation in asthma is dominated by eosinophils,11 patients with severe asthma may have predominantly neutrophils in their sputum,11,12 a characteristic more typical of COPD.11 Conversely, up-regulation of sputum eosinophils may occur in patients with COPD during exacerbations.11,13 It also is important to recognize that COPD and asthma can coexist in some patients.14 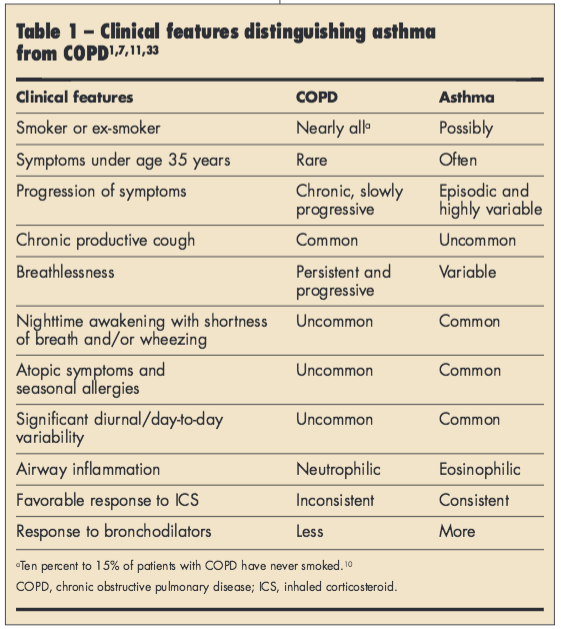 Spirometry is essential for confirming a diagnosis of COPD,1 which should be suspected in current or ex-smokers aged ≥ 40 years with dyspnea, chronic cough, or sputum,1 particularly those with a smoking history of ≥ 20 pack-years.18 In addition to a reduced FEV1/FVC ratio, patients with COPD generally have decreases in FEV1 and FVC, with greater declines in both measures as disease severity worsens.1

Performing conventional spirometry can be expensive and time-consuming, and it requires training and expertise.19 Handheld spirometers are an inexpensive, convenient, and practical alternative in the primary care setting.20 They are also accurate,21 with good correlation in FEV1 measurements between handheld spirometers and full spirometry.19 If findings from handheld or smaller pocket spirometers are abnormal, patients could be referred to a hospital-based pulmonary function laboratory or a specialist for more rigorous tests with conventional spirometry instruments.

If interpreted correctly, spirometry results can reveal important information about the patient’s disease. An FEV1/FVC ratio of < 0.70 that remains < 0.70 after bronchodilator administration (eg, albuterol 90 µg × 2 to 4 inhalations) confirms airflow obstruction that is not fully reversible, suggesting COPD.1 In patients who receive a diagnosis of COPD, spirometry findings also are used to assess disease severity and progression of the disease. Patients with FEV1 ≥ 80% predicted, FEV1 50% to < 80% predicted, 30% to < 50% predicted, or < 30% predicted are classified as having mild (Global Initiative for Chronic Obstructive Lung Disease [GOLD] stage I), moderate (GOLD stage II), severe (GOLD stage III), or very severe (GOLD stage IV) COPD, respectively.1 In addition, spirometry findings are used to assess individual patients’ changes in pulmonary function over time and after bronchodilator administration22; several criteria have been established for determining a clinically meaningful bronchodilator response (Table 2).22-25 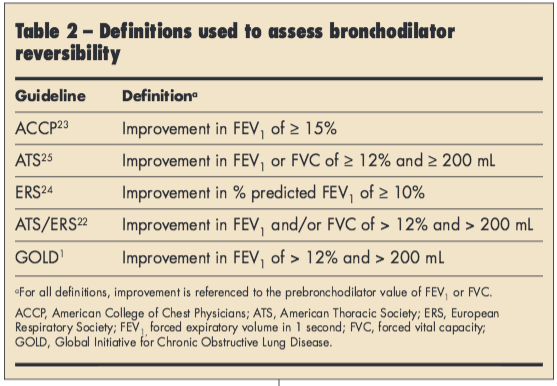 It should be noted that a patient’s acute response to bronchodilator treatment cannot be used to predict a long-term response to maintenance bronchodilator therapy.3,29 In a study by Tashkin and Kesten,29 tiotropium resulted in significant improvements in FEV1 from baseline compared with placebo after nearly a year of treatment, even in patients who did not show an initial short-term response to tiotropium (Figure 1). Similarly, responsiveness to salmeterol treatment was demonstrated at day 84 in patients classified as either “reversible” or “nonreversible” based on the ATS criteria for FEV1 after albuterol administration at baseline.3 However, in both studies, the magnitude of response to bronchodilator treatment was greater in patients classified as “reversible” or “a responder” at baseline.3,29 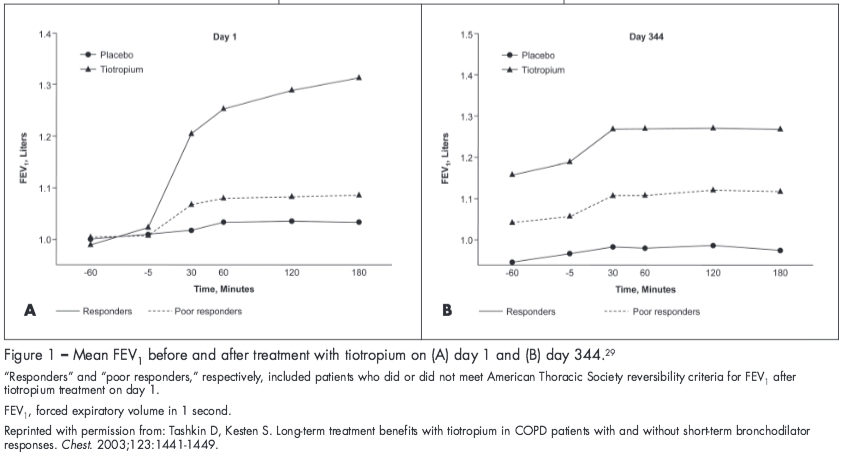 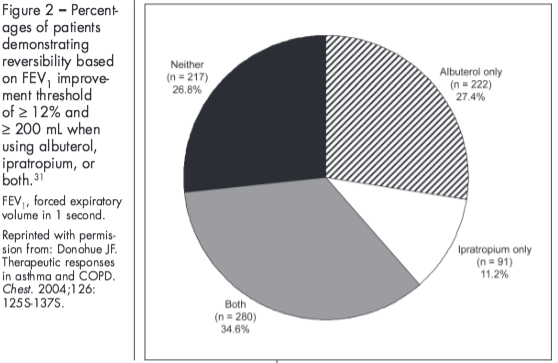 In a post hoc analysis of 5756 patients in the UPLIFT study, more than half of the patients exhibited bronchodilator responsiveness after maximal or near-maximal bronchodilation with ipratropium followed by albuterol treatment based on the combined ATS criteria for FEV1 improvement of ≥ 12% and ≥ 200 mL.5 Similarly, in 2 studies of 1109 patients with moderate to very severe COPD, a large percentage of patients demonstrated meaningful improvements in FEV1 based on the combined ATS criteria after administration of formoterol-containing treatment on the day of randomization (51% to 54%) and at the end of treatment (57% to 76%).4 Notably, at the screening visit, only 34% to 39% of patients exhibited reversibility to albuterol based on the combined ATS criteria for FEV1.4 These findings suggest that patients’ bronchodilator responsiveness may be underestimated if based on al-buterol reversibility testing alone. 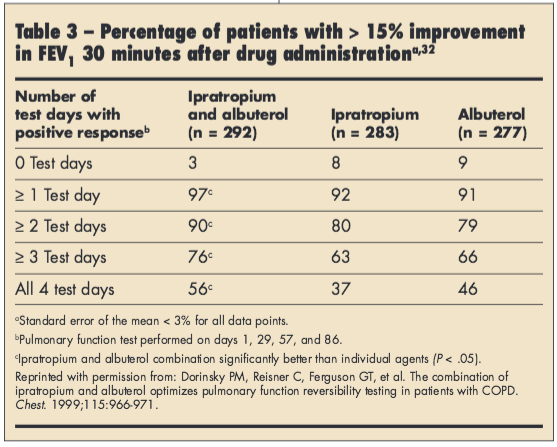 COPD is characterized by airflow obstruction that is not fully reversible; however, confusion exists surrounding the concept of reversibility. Although the disease is not fully reversible, patients with COPD often exhibit a clinically significant bronchodilator response, as defined by several different published criteria for FEV1 and/or FVC improvement (eg, American College of Chest Physicians, ATS/ERS, ATS). In particular, patients with more severe COPD show benefits of reduced air trapping and hyperinflation after bronchodilator treatment, as measured by FVC. Bronchodilators are central to COPD management, and although variability exists in bronchodilator response between and within patients, patients with COPD do show a clinically meaningful response to bronchodilator therapy, administered alone or in combination. 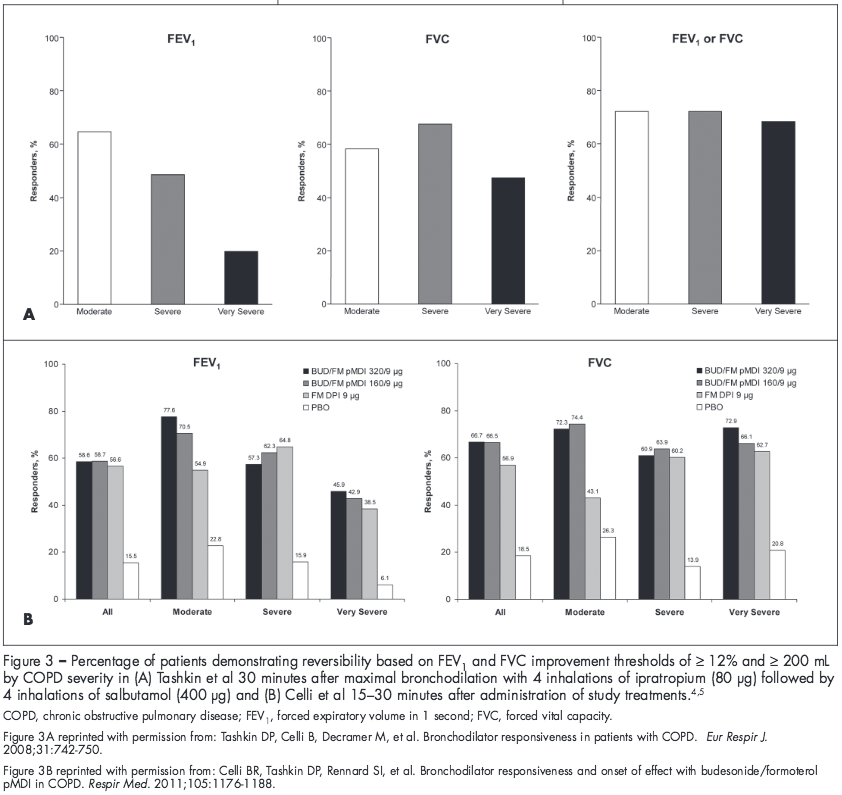 6. Kesten S, Rebuck AS. Is the short-term response to inhaled beta-adrenergic agonist sensitive or specific for distinguishing between asthma and COPD? Chest. 1994;105:1042-1045.

7. National Asthma Education and Prevention Program (NAEPP). Guidelines for the Diagnosis and Management of Asthma. Bethesda, MD: US Department of Health and Human Services, National Institutes of Health; 1997.

20. Stoloff SW. Diagnosis and treatment of patients with chronic obstructive pulmonary disease in the primary care setting: focus on the role of spirometry and bronchodilator reversibility. J Fam Pract. 2011;60(4 suppl):S9-S16.

23. Report of the Committee on Emphysema American College of Chest Physicians. Criteria for the assessment of reversibility in airway obstruction. Chest. 1974;65:552-553.