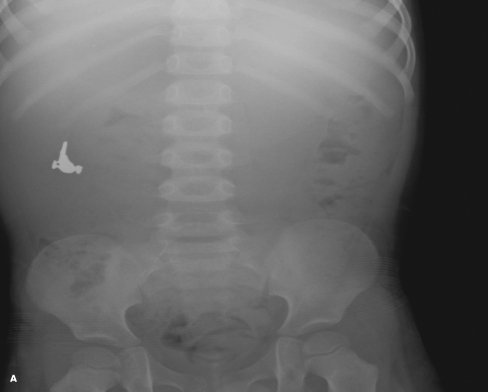 A 2-year-old boy presented to his pediatrician with an elevated screening lead level discovered at an outside clinic. The mother was told that he had a level of 33 µg/dL and iron deficiency anemia. His medical history was notable for speech delay and intermittent emesis since birth that had improved over the past 6 months. Physical examination findings were unremarkable.

At 2-month follow-up, the child had no emesis, but the lead level had increased to 24.7 µg/dL obtained via venipuncture. A complete blood cell count and iron levels were within normal limits. A more thorough evaluation of the child’s home and school revealed no sources of lead exposure. The elevation in his lead level was presumed to be secondary to delayed release of lead from his bones.

Three months later, the child’s lead level had risen to 36.8 µg/dL. Oral chelation was prescribed because of persistently elevated lead levels with unclear source of lead toxicity. However, this was discontinued after 5 days by the mother because the child had emesis and abdominal pain, which prompted radiographic evaluation.

An abdominal radiograph showed a bird-shaped radio-opaque object in the right abdomen and a large amount of stool (A). When the findings were discussed with the patient’s mother, she recalled seeing her son playing with a bird-shaped charm about 1 year earlier but did not witness him swallowing it.

The child was given an enema, and a 2-day course of magnesium citrate was prescribed. A large amount of stool was passed, but no foreign body was retrieved. A second abdominal radiograph revealed no change in the location of the foreign body.

The patient was admitted to the hospital and underwent whole-bowel irrigation with polyethylene glycol solution and additional enemas. Clear liquid stools were observed on the second day. A postprocedure radiograph showed resolution of fecal impaction but no change in the position of the foreign body. 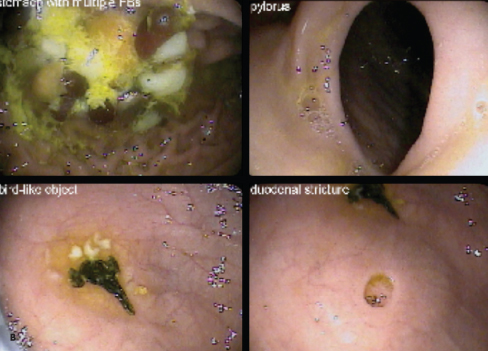 Gastroenterology was consulted for retrieval of the foreign body. Esophagogastroduodenoscopy revealed a distended stomach and a widely open pylorus with dilated duodenal bulb and duodenal stricture, proximal to which the foreign body was found and removed (B). Further management included nasogastric decompression and parenteral nutrition support.

Surgical consultation recommended an upper GI series, which revealed an extremely dilated proximal duodenum and severe near-complete obstruction at the junction of the second and third portion of the duodenum. The patient underwent a laparoscopic side-to-side duodenojejunostomy and recovered well after an unremarkable postoperative course.

The metallic charm was sent to the Los Angeles County Environmental Toxicology Laboratory for testing and was found to contain 19% lead (192,000 mg/kg, state limit 6%) and 1.4% arsenic. Results of 24-hour urine heavy metal testing were unremarkable. At the 1-, 2-, and 3-month follow-up visits, the patient’s lead level decreased to 22.3 µg/dL, 19.6 µg/dL, and 12.8 µg/dL, respectively. He experienced no further symptoms.