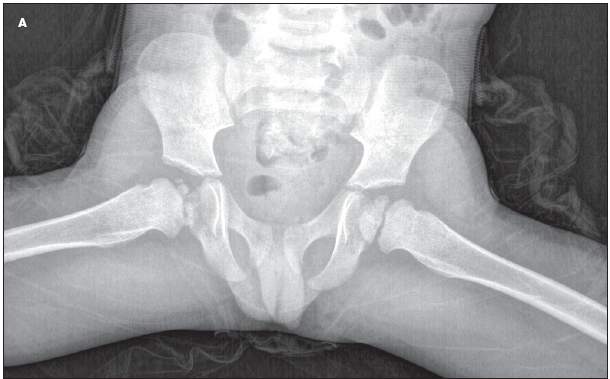 A 2 1/2-year-old boy was brought to the emergency department because of fever, cough, lower abdominal pain, and dysuria. Chest and abdominal radiographic findings were normal; however, an abnormality of the right hip was noted on the abdominal film. The child was referred to the university hospital for treatment of suspected urinary tract infection and pneumonia. 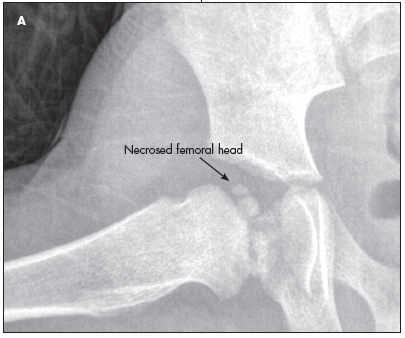 During further questioning on admission, the mother reported that the child had no past history of injury, hospital admissions, unexplained fevers, sickle cell disease, difficulty in walking, or hip or leg pain. Physical examination revealed a thin, afebrile, playful child with no clinical signs of pneumonia and benign abdominal findings. His hips, back, and extremities were normal; he had full range of motion and no weakness or pain with movement or pain with standing. Urinalysis results from the outside hospital were negative. Hip films revealed necrosis of the right femoral head (A and B). 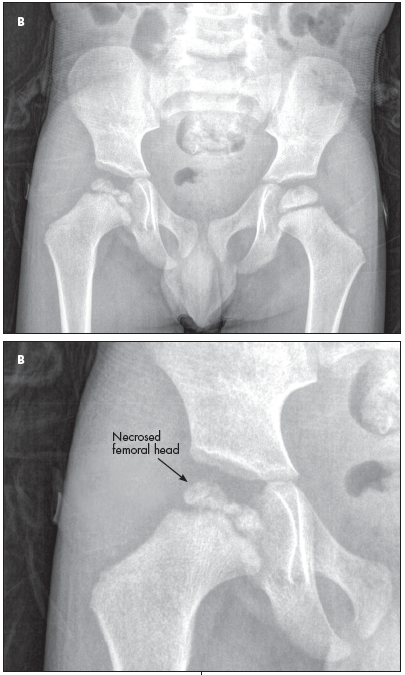 Chronic avascular necrosis (AVN) results from a disruption of the blood supply to the femoral head. Symptoms on presentation may vary depending on the child’s age; however, they often present as pain and limping, which may be exacerbated by weight-bearing and relieved with rest.1 The condition may be painless early in the process, which contributes to late diagnosis. In young children, the location of the pain, when it occurs, may be difficult to pinpoint. It may be misinterpreted by the parent as lower abdominal pain or dysuria. The most common site of pain, when described, is the groin; other affected sites include the ipsilateral buttock, knee, hip, and anteromedial thigh.2

Physical findings may include limited abduction and internal rotation of the hip, with passive range
of motion, and pain with straight leg raise against resistance.3 Frog leg (A) and anteroposterior (B) pelvic radiographs can be diagnostic, as they were in this case.4

AVN of the femoral head is associated with multiple disease states, most commonly Legg-Calvé-Perthes disease, which typically affects active boys aged 4 to 8 years.4 Although the cause is probably multifactorial, there may be contributing factors, such as trauma, corticosteroid use, hypercoagulable states (eg, sickle cell disease), and other disease processes.5 Septic arthritis may cause AVN secondary to increased joint pressure, which compresses the vasculature that supplies the cartilage and femoral head.3 AVN can result from surgical interventions for developmental dysplasia of the hip and slipped capital femoral epiphysis by damaging the blood supply to the femoral head.6

The goal of treatment is to preserve the native joint. Treatment options range from conservative management with partial weight bearing and rest to total joint replacement. The child in this case was referred to a pediatric orthopedic surgeon for splinting followed by possible surgical stabilization. Children who present before age 6 years and who have less than 50% necrosis of the femoral head generally have a better prognosis than children who have greater than 50% necrosis.1,3 This may be related to the extended time allowed for remodeling of the femoral head and acetabulum.3