“My daughter has a large scar on her knee from a soccer injury. Is there anything that I can put on it to make it go away?”

Abrasions leading to scarring are a familiar part of childhood. Scarring in childhood can lead to not only significant cosmetic concerns but also functional morbidity accompanied by symptoms of tightness, tenderness, and pruritus. Both posttraumatic and surgically-induced wounds are able to produce substantial scars. It is important to establish realistic expectations when counseling parents on the treatment of scars, as there is no one therapy that can completely resolve scars. However, there are noninvasive scar treatments that may improve their appearance and symptoms.

Scars exhibit a spectrum of severity from milder ones that exhibit minimal differences in appearance from the surrounding skin to those with excessive, raised scar tissue. In order to be classified as a keloid, the area must have scar tissue that extends beyond the original boundaries of the scar. Hypertrophic scars generally have a rapid growth phase of abundant scar tissue over 6 months, but they do not extend beyond the scar boundary and have the ability to regress over 1 to 3 years. Pathogenic scarring is more likely to occur in areas of high wound tension, such as the chest or back, or occur after wounds with secondary infection.1 Children are particularly susceptible to pathogenic scarring, including hypertrophic scars and keloids, from age 2 years through adolescence.

Before prescribing treatment for a scar (Table), it is necessary to be sure the diagnosis of scar is correct. It is essential to differentiate between a scar and postinflammatory pigment changes following wounding. Postinflammatory hyperpigmentation or hypopigmentation may require months to resolve, but generally the discoloration is not permanent. Moisturizing with an occlusive emollient, such as white petroleum jelly, is adequate for postinflammatory pigment changes. The paramount basics to scar treatment are adequate occlusion and hydration. Transepidermal water loss is increased significantly with wounding and remains increased in hypertrophic scars and keloids.2,3 Dehydrated keratinocytes are theorized to produce a cytokine profile that triggers dermal fibroblasts to increase collagen synthesis. Occlusion and adequate hydration of keratinocytes may lead to a downregulation of extracellular matrix production via a modification in cytokine profile; this modification of the cytokine profile is the likely mechanism of scar treatments involving silicone-based products, including silicone gel and sheeting.2,4 Several controlled studies have demonstrated strong evidence for improvement in color, elevation, hardness, and pliability of pathogenic scars.5-7 Silicone gel sheeting has also been shown to be an effective prophylactic treatment for preventing the development of pathogenic scarring in controlled studies.8-10 Studies comparing occlusives other than silicone have shown inferior results as compared with silicone-containing products.11 It has been hypothesized that silicone offers a semi-occlusive dressing that gives just the appropriate amount of occlusion.2,12 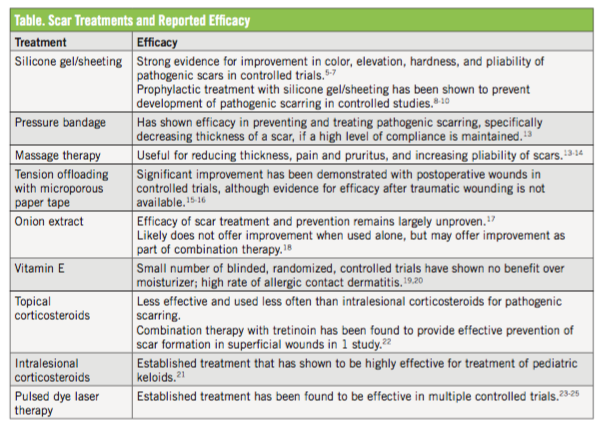 Overly occlusive dressings, such as plastic sheeting, can cause skin irritation and maceration. Dressings that allow a higher level of water evaporation also give inferior results. Silicone products have been shown to possess a unique level of occlusion that allows for optimal improvement in scar tissue appearance.2 Silicone-containing products can be found as sheeting or in a gel format. Silicone gel is preferable in terms of ease of use and application to areas that require a high level of mobility, such as joints. Optimally, silicone sheeting or gel should be applied as soon as 2 weeks postwounding and be continued for at least 3 months.13

Mechanically-based therapies are minimally invasive interventions that have been shown to be effective for the treatment and prevention of hypertrophic scars. Pressure therapy, usually done through pressure bandages, exerts its effects by decreasing local edema and causing local hypoxia leading to fibroblast apoptosis and collagen production decline.13 It is recommended that pressure dressings be applied for 23 hours per day for at least 6 months while the scar is still maturing, requiring a high level of patient compliance.

Scar massage is a type of mechanical therapy that requires less time commitment.13 Massaging is thought to accelerate collagen maturation, improve pliability, and reorient haphazard collagen fibers.14 Scar massage should be performed for 10 to 15 minutes nightly, starting a few weeks after wounding. Massaging of scars can easily be performed at home with no cost and minimal possible adverse effects. It should be noted that specific massage recommendations have not been studied in controlled trials.

Mechanical offloading of tension is a method wherein silicone sheeting or microporous hypoallergenic paper tape is applied in a vector perpendicular to the lines of maximum tension on the scar. It has been well-established that wounds under high tension are at a higher risk to form hypertrophic scars; therefore, decreasing the tension of the wound is the goal of this therapy. Studies provide evidence that significant improvement in the appearance of scars can occur with taping, even with a delayed therapy onset of up to 3 months after initial wounding.15,16

Various topical preparations are available over-the-counter (OTC) and are marketed to improve the appearance of scars. There is limited scientific evidence that proves these products are efficacious. The most common ingredients in these preparations include onion extract, vitamin E, and low-potency topical steroids. Onion extract, or extractum cepae, is a compound with bactericidal and anti-inflammatory properties thought to inhibit fibroblast proliferation and therefore collagen production. Recommended timing of application of onion extract is 3 times daily, starting about 1 week after wounding and continuing up to 12 weeks. A 10% onion extract is the main ingredient found in a popularly advertised OTC scar treatment. There is no overwhelming scientific evidence that onion extract alone is more efficacious than an emollient control.17 The addition of onion extract to silicone sheeting or intralesional corticosteroid injections may produce a greater therapeutic effect compared with either treatment alone.18

Vitamin E, or α-tocopherol, is an antioxidant with anti-inflammatory properties that is colloquially thought to be well-known for treating scars. Although there is very limited evidence that topical Vitamin E helps to treat or prevent scarring, it is arguably the most common topical ingredient used to treat scars. A 2016 literature review by Tanaydin and colleagues assessed prospective studies using topical Vitamin E as topical scar therapy and concluded that there is “not yet sufficient evidence” that topical Vitamin E therapy has a significant beneficial effect on scar appearance.19 Khansa and colleagues reviewed the literature and found only 4 blinded randomized controlled trials studying the efficacy of topical vitamin E on scarring; 3 of the studies reported benefit compared to placebo.13 Topical vitamin E causes contact dermatitis and is a common allergen found on patch testing in the dermatologist’s office. Baumann and Spencer studied topical vitamin E use for scarring and reported the side effect of contact dermatitis in 33% of the study population.20 Therefore, given the high rate of adverse effects and unproven benefit, topical vitamin E therapy cannot be recommended for treatment or prevention of scarring.

More advanced treatments by dermatologists or wound care specialists include in-office treatments and procedures aimed to improve scar thickness, pliability, pain, and pruritus. Intralesional injections of corticosteroids have shown to be very effective21 and continue to be a preferred first-line treatment of hypertrophic scars and keloids. Steroids promote collagen degradation and inhibit fibroblast growth, thereby inhibiting collagen production. Usually 3 to 4 injections should be expected, and these are performed every 4 weeks. However, this procedure can be painful, which limits its use in young children. Side effects include hypopigmentation, dermal atrophy, and telangiectasia formation.

In order to avoid injections, potent topical steroids applied under occlusion are an alternative for the pediatric population. If children are prescribed potent topical steroid therapy, they should be followed closely by the clinician. Topical steroids are much less likely to reach high concentration in the thickened dermis of scars, and they are expected to provide a lower level of benefit compared with intralesional therapy. Taheri and colleagues found that topical clobetasol plus topical tretinoin significantly decreased the incidence of scar formation in patients with superficial wounds.22

Laser therapy has been shown to be associated with impressive efficacy for treating pathologic scarring,23-25 and it is considered by many experts to be the gold standard for scar therapy. Pulsed dye laser therapy, with or without ablative laser therapy, is now a first-line treatment for pathologic scarring and is widely used in the adolescent and adult population. Lasers may have limited use in young children due to pain associated with this procedure. Expected effects from laser treatments include tenderness, bruising, and possibly blistering.

Less commonly used treatments include various combinations of 5-fluorouracil, mitomycin C, imiquimod, verapamil, and bleomycin. Re-excision with scar revision can also be considered in certain cases, which is usually combined with topical or intralesional therapy.

A typical childhood scar may take up to 6 months to 1 year to remodel, and an appropriate amount of time should pass before considering any of the more invasive options of scar treatment. Proper hydration of the stratum corneum provided by silicone occlusives, scar massage, and reduction of wound tension are noninvasive interventions that can have high efficacy for prevention and treatment of pathogenic scarring. These treatments have little to no adverse effects and may be performed easily at home. If additional therapy is desired, adding an onion-extract–based therapy may prove beneficial, but overwhelming evidence for improved efficacy is lacking. Given the high rate of contact dermatitis and lack of proven efficacy of vitamin E, this topical ingredient is not recommended. Further treatment of hypertrophic scarring requires an evaluation by a dermatologist or other scar specialist.