Child’s Rash After Penicillin: Sensitivity, or Something Else?

The September “Dermclinic” article included a case that illustrated a young child who developed a rash after amoxicillin was given.1

As the authors note, T-cell immunity is a delayed-type hypersensitivity. In all of the cases reported in the literature thus far, the patients with such reactions have had a history of repeated exposures to antibiotics. However, the patient in this case report did not have previous exposure.

Additionally, penicillin still is a very useful and inexpensive antibiotic. It is a mistake to tell all pediatricians to stop using penicillin without mentioning when it is allowed to be used again.

I have coauthored a study on this subject,2 and of 86 pediatric patients who developed an undefined rash following antibiotic ingestion, none showed any sensitivity to penicillin based on the results of skin tests and blood tests. Infectious agents may have caused the rash at the time our patients happened to be on antibiotics, and other ingredients in the suspension formula of the antibiotic, such as yellow and red dyes, could have contributed the rash. I explained to the referring pediatricians of the children in our study that their patients should be allowed to take penicillin again after negative results of a workup for sensitivity. In our telephone follow-up with those pediatricians 5 years later, they all told us their patients never developed adverse reaction to antibiotics again.

Without proving that a patient has penicillin sensitivity, the hands of pediatricians would be forever tied: Dare not prescribe penicillin, but do not know why. Moreover, administering a different antibiotic for a common upper respiratory infection without a workup for penicillin sensitivity is not optimum management of a childhood infection. 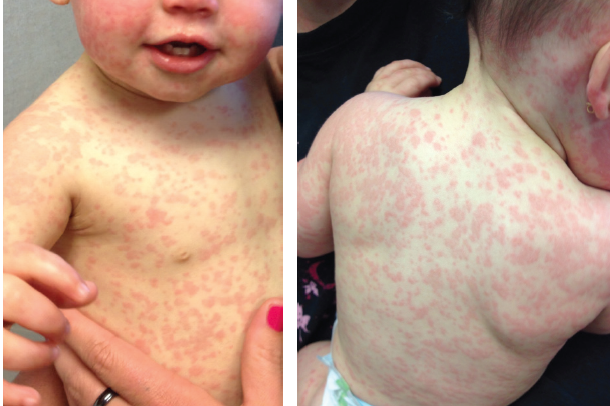 In the September issue’s “Dermclinic” article, the authors attributed a child’s rash to type IV delayed hypersensitivity and suggested that amoxicillin be discontinued.

Labeling a child as being allergic to amoxicillin when that is not the case could cause unnecessary difficulties in selecting antibiotics for that child for years to come.

We attributed the girl’s impressive rash to a classic type IV delayed-type hypersensitivity to penicillin, specifically to amoxicillin; the antibiotic had been prescribed and started a week beforehand after a diagnosis of acute otitis media at an acute care clinic. We based our diagnosis of delayed hypersensitivity reaction on the timing of the onset of rash after amoxicillin initiation (6 days) and the characteristics of the lesions.

During the mother’s initial phone encounter with an on-call pediatrician the previous evening, she had been told to discontinue the amoxicillin and to start diphenhydramine, out of concern for a possible allergic reaction, until the girl could be examined the next day. The patient presented to clinic the following afternoon as requested. During that visit, we found the patient to be completely asymptomatic, with the exception of her impressive rash. The lesions were erythematous, maculopapular, scattered, blanching, and in areas consistent with the diagnosis of delayed hypersensitivity to amoxicillin.

Since our physical examination of the girl revealed no further evidence of acute otitis media, we decided to discontinue the antibiotics. Had her tympanic membranes still been abnormal, we would have completed a full course of amoxicillin therapy. Of note, this patient had been treated once previously with amoxicillin without any concern or rash development. She also has since tolerated amoxicillin with no rash development. For this reason, we have no pursued allergy testing.