A 4-year-old boy with known asthma presented to the emergency department (ED) with a cough of 2 days’ duration. He had no runny nose or fever. Despite use of albuterol for the last 2 days at home, his cough had worsened and respiratory rate had increased. Physical examination  results were remarkable for moderate respiratory distress with decreased air entry and expansion of the chest. Wheezing and crackles were noted on the right side during the lung examination. The abdomen was soft, nontender with no organomegaly, and bowel sounds were present in all 4 quadrants. The patient was given a combined nebulized treatment of albuterol and ipratropium 3 times and oral steroids to help with respiratory distress.

A chest radiograph was suggestive of lower respiratory tract infection with an incidental finding of loops of bowel (large intestine) in the right upper quadrant of the abdomen (just under the right hemidiaphragm) suggestive of Chilaiditi syndrome. The patient was discharged home on albuterol, oral steroids, and azithromycin. His primary medical doctor was called about the incidental finding and the ED visit. Follow-up in 2 to 3 days with his doctor was advised. 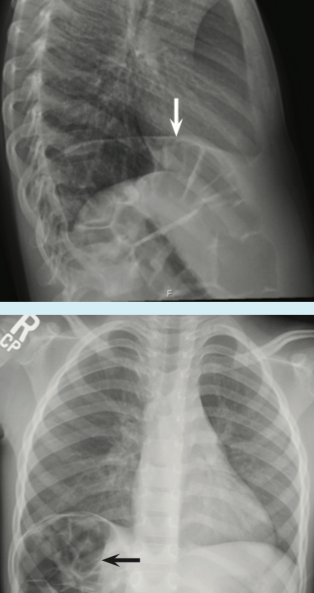 Chilaiditi syndrome was first described in the medical literature in 1910 by Greek radiologist Demetrius Chilaiditi. This syndrome is a rare condition in which bowel loops are abnormally located between the liver and the diaphragm. One published report estimated the prevalence at 0.025% to 0.28% of the general population.1,2 The significance of this anatomical variant is that its radiologic appearance might be mistaken for pneumoperitonium and/or perforated bowel. Chilaiditi syndrome has equal prevalence among males and females. It is more common in older adults, but it can occur at any age and has been reported in children.1

The exact cause of Chilaiditi syndrome is unknown. Various proposed etiologies include absence, laxity, or elongation of suspensory ligaments of the transverse colon or the falciform ligament, as well as dolichocolons or congenital malpositions.In most patients, the interposition of bowel between the diaphragm and liver is asymptomatic (Chilaiditi sign) and is found as an incidental radiologic finding. In patients presenting with Chilaiditi syndrome, the most common symptoms are gastrointestinal (GI), with recurrent abdominal pain, nausea, vomiting, or constipation, and in some cases, with respiratory distress.

Additionally, Chilaiditi syndrome has been associated with a variety of pulmonary or GI malignancies (involving the colon, rectum, or stomach).2

Usually, no intervention is needed unless the patient is symptomatic. For symptomatic patients, the initial management includes bed rest, intravenous fluids, bowel decompression, enemas, and laxatives. Surgical intervention may be needed if no response to supportive management or signs of bowel ischemia are present.2 In the majority of cases, Chilaiditi syndrome is generally an incidental radiologic finding and is asymptomatic.

However, when a patient presents with respiratory distress, one of the manifestations of this disorder, clinicians should have a high index of suspicion when analyzing the chest radiograph. Given the potential for patients with Chilaiditi sign to become symptomatic, clinicians should follow these patients closely.