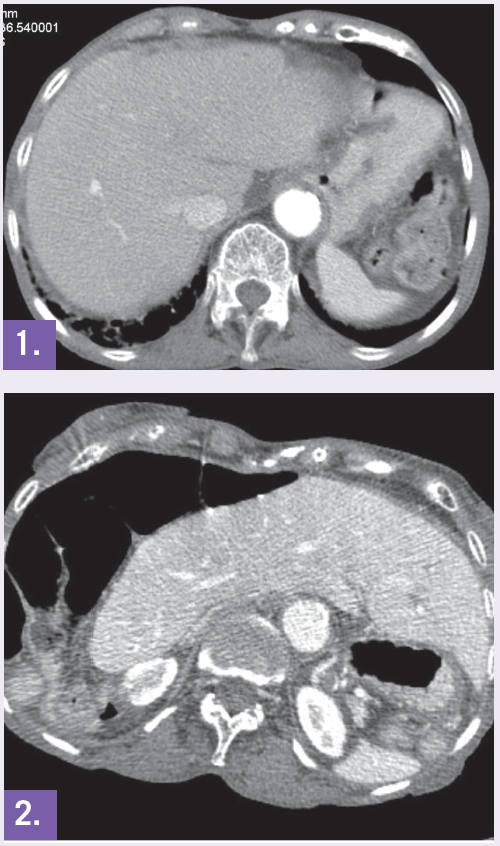 A 94-year-old woman with a history of moderate dementia and chronic pancreatitis with loose stools was admitted to the inpatient medicine service for 1 day of generalized malaise, low-grade fever, and vomiting. Physical exam was notable for thin body habitus and nondistended and nontender abdomen with normal bowel sounds. Her symptoms resolved spontaneously and were attributed to a nonspecific viral illness.

A CT of the abdomen found that compared to a CT performed 7 years prior (Figure 1), the liver was now located in the left side of the abdomen (Figure 2) and the gallbladder was located at the left lower quadrant. This patient was also hospitalized 9 months before the current admission for colicky abdominal pain and diarrhea, which also resolved spontaneously. Abdominal CT performed at that time showed small bowel obstruction and volvulus.

Discussion. Chilaiditi sign is the radiological observation of transposition of a loop of large intestine in between the diaphragm and liver. The incidence of this radiological finding is rare, found in 0.025% to 0.28% of chest and abdominal radiographs1 and 1.18% to 2.4% of abdominal CT scans.2 Note: With the increasing use of imaging studies, growing numbers of cases are certain to be identified.

Radiologic criteria for diagnosis must include the following: the right hemidiaphragm must be elevated above the liver by the intestine, the bowel must be filled by enough air to show pseudopneumoperitoneum, and the superior margin of the liver must be below the margin of the left hemidiaphragm.3 The cause of the transposition may include laxity or absence of the falciform ligament or the suspensory ligaments of the transverse colon. Changes in anatomy can also result from elongated or redundant colon caused by chronic constipation, dolichocolon, and congenital abnormalities.

When such transposition of the large intestine causes symptoms it is known as Chilaiditi syndrome. The most common symptoms include abdominal pain, nausea, vomiting, and constipation. Less commonly, patients may complain of respiratory distress and chest pain. The complications of Chilaiditi syndrome include volvulus, intestinal obstruction, and perforation.2

Chilaiditi syndrome is more common in older adults and men (a 4:1 male to female predominance), and people with mental retardation or schizophrenia.2,4 Risk factors for Chilaiditi sign and syndrome include abnormally high diaphragm due to phrenic nerve paralysis and muscular degeneration, reduced liver volume due to cirrhosis, abnormal or increased colonic mobility, ascites, chronic obstructive pulmonary disease, pregnancy, and aerophagia.2

Treatment. Chilaiditi syndrome is initially treated with conservative management, including bedrest, nasogastric decompression, fluid supplementation, laxatives and enemas, and the discontinuation of contributing medications. A follow-up radiograph should be performed to assess for decrease of air under the diaphragm. When conservative management fails, surgical interventions may be required, including colopexy or colectomy.