A 33-year-old woman with no significant past medical history presented to our family medicine practice with concern for a headache when she laughs or leans her head forward. She had been having the intermittent headache for the past 2 years, and it lasts seconds to minutes at a time when it occurs. The patient described it as a severe, sharp pain located frontally across her forehead and radiating to the superior aspect of the scalp.

She stated that these symptoms occur more commonly in the mornings and occasionally are associated with feelings of lightheadedness. There were no other associated neurologic symptoms such as changes in vision or in hearing, convulsions, paresis, loss of consciousness, or altered mental status. She also denied symptoms such as nausea, vomiting, sinus congestion, nasal drainage, aura, photophobia, phonophobia, chest pain, or palpitations. She denied having a history of chronic headache prior to the onset of these symptoms. She was not taking any medications and denied any substance abuse. 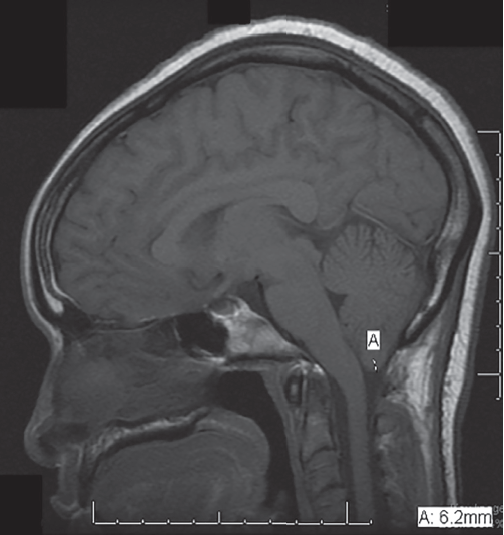 Diagnostic tests. Magnetic resonance imaging (MRI) of the brain demonstrated that the cerebellar tonsils were low-lying, extending approximately 6 mm inferior to the plane of the foramen magnum, indicating the presence of a Chiari malformation type I (Figure). The patient was referred to the neurosurgery department for evaluation and decision regarding treatment

Discussion. Chiari malformations are a group of anatomic abnormalities affecting the brain, which are classified into 4 types. Chiari malformation type I (CM-1), the most frequent type, consists of downward displacement of the cerebellar tonsils through the foramen magnum into the upper cervical canal.1,2 These malformations usually are congenital in origin, with the exact pathogenesis remaining unknown. It is hypothesized that different variations of genetic and environmental influences result in structural defects during development of the posterior fossa; less frequently, these abnormalities also can be acquired after birth from factors such as head trauma, mass effect secondary to space-occupying lesions, and excessive drainage of cerebrospinal fluid.2

Based on current estimates, it is believed that the prevalence of CM-1 is approximately 0.5%, with a female to male ratio of approximately 3 to 1.2 The clinical manifestation of CM-1 is highly variable, ranging from patients with an asymptomatic deformity found incidentally on neuroimaging to patients who experience significant neurologic morbidity. Most commonly, the malformation remains asymptomatic throughout childhood, with symptoms becoming progressively more apparent as the patient ages. Symptoms can include headaches, neck pain, disequilibrium, vision changes, auditory disturbances, loss of coordination, and nausea. These symptoms often are exacerbated by physical activity and Valsalva maneuvers such as coughing, laughing, or straining.3 This case highlights the importance of recognizing key modifying factors and associated symptoms in the evaluation of any patient presenting with head pain.

Diagnosis of suspected CM-1 requires neuroimaging, with MRI being the study of choice. Management of Chiari malformations is dependent upon the severity of the deformity and the degree of neurologic deficit. Asymptomatic patients can be managed without intervention other than ensuring that neurologic examinations and follow-up neuroimaging studies occur at regular intervals to monitor progression of the condition.3 The development of cerebrospinal fluid obstruction at the level of the foramen magnum is considered an important indication for proceeding to surgical management. Additionally, symptomatic patients with neurologic impairments attributable to CM-1 should be considered for posterior fossa reconstruction surgery.4