For the past 6 months, a 2½-year-old boy had headaches that woke him from sleep. His parents reported that he typically grabbed the back of his head; lately, he had also complained of pain in his eyes. He had not vomited and had no significant medical history. Review of systems was notable for mild snoring without apnea, head-banging, and clumsiness. 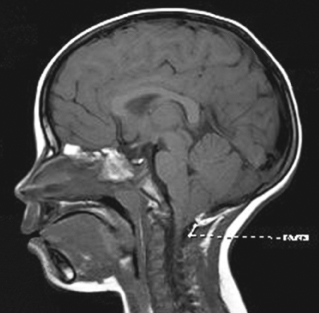 Physical examination, including a careful neurological examination, revealed normal and nonfocal findings. The child was referred to a neurologist. An MRI scan revealed herniation of the cerebellar tonsils to the level of C1, consistent with a Chiari I malformation.

Clinical signs and symptoms are related to abnormalities in cerebrospinal fluid flow as well as direct neural compression and usually develop later in childhood. Common presenting symptoms include headache and neck or back pain, often exacerbated by the Valsalva maneuver. About 20% of patients have lower cranial nerve dysfunction with vocal cord paralysis, hoarseness, sleep apnea, diminished gag reflex, and dysphagia2; these symptoms are more common in children younger than 3 years. Such children can present with poor feeding, failure to thrive, or aspiration pneumonia. Visual or hearing deficits, including blurry vision, eye pain, field cuts, intermittent hearing loss, vertigo, and nausea, occur in 70% of patients.3

Treatment of Chiari I malformation is surgical. The goal is prevention of disease progression and relief of symptoms. The timing of the operation and the specific procedure chosen should be individualized. The basic surgical procedure is the enlargement of the bony area of the craniocervical junction and decompression of the posterior fossa.3

This boy underwent a craniocervical decompression with duraplasty. At follow-up, his headaches had resolved; he no longer snored. ■