Correction: The image in Figure 2 printed in the November 2017 issue was incorrect and has been replaced here with the correct CT image.

A 16-year-old girl with a surgical history of ventriculoperitoneal (VP) shunt placement at birth presented to the emergency department with a chief concern of a 3-week history of increasing abdominal girth and a 4.5-kg weight gain.

History. The patient had undergone VP shunt placement at 2 weeks of life for congenital hydrocephalus noted on prenatal ultrasonograms. The VP shunt had been revised at 3 months of age with no complications. The patient otherwise had no medical problems and had been doing well prior to presentation, with no associated abdominal pain, fever, nausea, vomiting, jaundice, decreased appetite, or lethargy.

Diagnostic tests. Abdominal ultrasonography was performed, the results of which confirmed the presence of diffuse ascites (Figure 1). A radiographic shunt series and computed tomography scans of the brain without intravenous contrast (Figure 2) were obtained, the results of which confirmed stable placement of the VP shunt. Findings of abdominal and pelvic magnetic resonance imaging (MRI) were normal and did not demonstrate an abdominal pathology other than the marked ascites visualized within the peritoneal cavity (Figure 3). 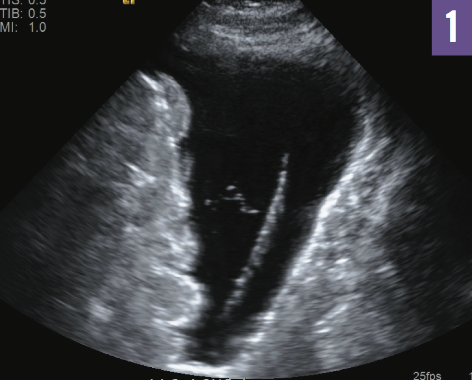 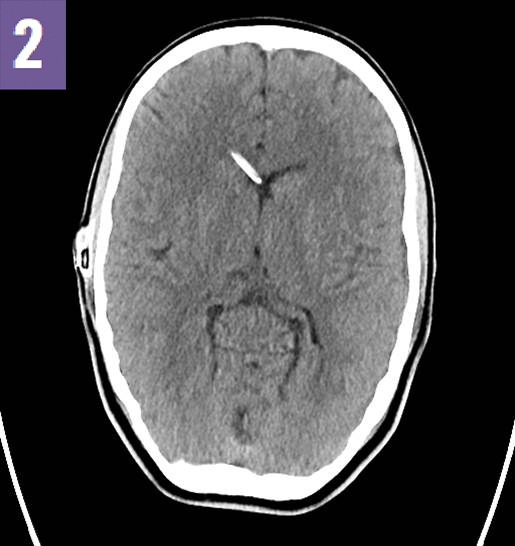 Figure 2: Computed tomography of the head showed the VP shunt catheter terminating in the anterior portion of the third ventricle. No hydrocephalus was seen. 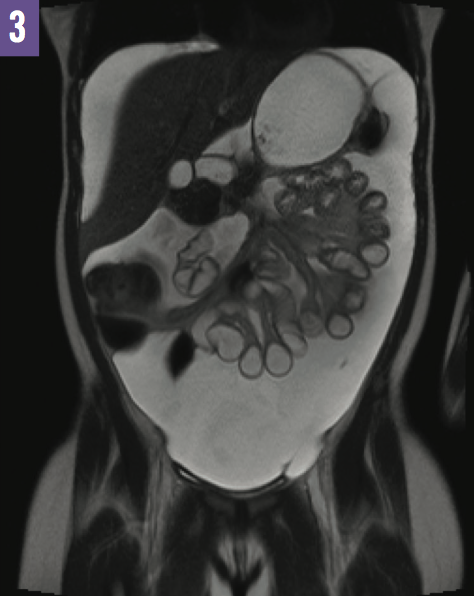 Figure 3: Marked ascites were visualized within the peritoneal cavity on MRI.

Diagnostic paracentesis was performed, and the results were significant for a serum-ascites albumin gradient of 1.7 g/dL. Results of all infectious and cytology studies were normal. Further evaluation did not indicate the presence of either cirrhotic or noncirrhotic portal hypertension.

The patient underwent a large-volume therapeutic paracentesis (1200 mL) a few days after presentation and was subsequently discharged home. She remained asymptomatic for 2 months with no obvious recurrence of ascites.

A few months after her initial presentation, she developed an umbilical hernia. During the umbilical hernia repair, she was noted to have a large amount of ascites, with a total of 3200 mL of fluid removed during the procedure.

Shortly after this repair, the patient began to have increasing abdominal girth and weight gain, which required another therapeutic paracentesis a few weeks later. Infectious and cytology studies were repeated, the results of which were normal. The patient received a diagnosis of cerebrospinal fluid (CSF) ascites.

Outcome of the case. The decision was made to convert the patient’s VP shunt to ventriculoatrial (VA) shunt. Following placement of the VA shunt, she had complete resolution of her ascites and has since remained asymptomatic.

Given its rarity, the etiology of this condition remains unclear.4 While the pathophysiology is not well understood, there are a few potential causative factors.5 Excess CSF production from an intracranial tumor such as a choroid plexus papilloma or optic pathway glioma has been observed.6,7 Reduced ability of the peritoneum to absorb CSF due to peritoneal inflammation is also a potential etiology.8 Other potential causes include elevation of CSF protein secondary to central nervous system tumors, and chronic infection such as tuberculosis leading to increased oncotic pressure within the peritoneum.3,7

However, most cases described in the literature have an unknown etiology, as was the case with our patient. Our patient had no evidence of malignancy, peritonitis, or other infection including tuberculosis; her ascites developed 16 years after VP shunt placement. It is important to consider this diagnosis in patients with refractory ascites in the setting of a VP shunt and with otherwise negative workup results. Conversion to a VA shunt should be considered for treatment, which caused spontaneous resolution of our patient’s ascites.