Cerebral Hemiachromatopsia in the Elderly

Hemiachromatopsia is defined as a disorder of impaired color perception with relative preservation of form vision in one-half of the visual field. An individual with hemiachromatopsia typically perceives bright colors such as blue, red, and green as shades of gray in one-half of the visual field but sees colors in the other half of the visual field as normal. It is an uncommon but recognized visual field defect.1 Patients are often unaware of the defect, and because color perception is rarely tested for within the scope of a neurological examination, hemiachromatopsia is an easily missed clinical finding.1,2 We discuss the potential consequences of missing this subtle abnormality, demonstrating the importance of conducting this assessment for patients who present with visual symptoms. We also describe the case of an elderly woman with right homonymous hemiachromatopsia resulting from a left occipital infarct. A more detailed look at the patient’s anatomy illustrates that extra-striate areas outside the primary visual cortex may have an important role to play in color vision and suggests that patients with extensive infarction may present with minimal neurological symptoms.

An 83-year-old woman was admitted to a general acute care hospital with a 6-day history of gradual-onset headache and nonspecific visual disturbance, including vague difficulties while trying to read. One week earlier, she had noticed a brief “blacking” of vision from the right side, which resolved almost immediately. She reported no other associated symptoms and specifically denied any weakness or sensory disturbance. The patient’s medical history included rheumatoid arthritis, polymyalgia rheumatica, hypertension, and previous transphenoidal hypophysectomy for a benign pituitary tumor with no residual defect. Before symptom onset, she was a high-functioning individual who lived alone and was independent in all activities of daily living.

Initial neurological and ophthalmological examinations revealed 6/24 vision bilaterally, full range of eye movement, normal fundi, and no evidence of facial weakness or sensory disturbance. The patient’s speech and comprehension were intact, and she was alert and orientated to time, place, and person, scoring 10/10 on the Mini-Mental State Examination. On careful examination of the patient’s visual fields, a right homonymous hemianopia was detected.

The patient’s muscle tone was normal in both the upper and lower limbs, power was 5/5 across all muscle groups, sensation and reflexes were all intact, and plantar responses were equivocal bilaterally. A cardiovascular examination revealed an ejection systolic murmur on auscultation, but the chest was otherwise clear and all other system groups were intact. Results of subsequent blood tests were largely unremarkable except for an elevated erythrocyte sedimentation rate (ESR) of 47 mm/h and a positive venereal disease research laboratory (VDRL) test.

Repeat visual field testing 3 days later interestingly showed complete resolution of the patient’s right homonymous hemianopia, and she demonstrated accurate perception of form and movement in both visual fields. When color vision was tested using red, white, and blue hat pins, however, she was unable to perceive color in the right half of the visual field, demonstrating an isolated right homonymous hemiachromatopsia. The patient had been completely unaware of the defect. 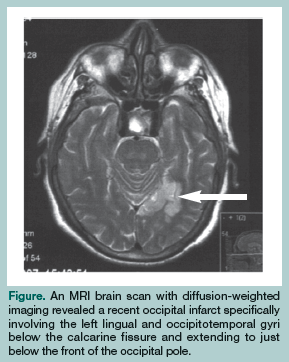 A magnetic resonance imaging (MRI) scan of the brain with diffusion-weighted imaging revealed a recent occipital infarct specifically involving the left lingual and occipitotemporal gyri below the calcarine fissure and extending to just below the front of the occipital pole (Figure). Importantly, the calcarine sulcus and the primary visual cortex were entirely spared, demonstrating that color vision defects can occur with extrastriate involvement. The infarct corresponded to the posterior cerebral artery territory and was reported by the hospital neuroradiologist as most likely to be cardioembolic in origin. This was supported by evidence of two episodes of paroxysmal atrial fibrillation detected on a 24-hour Holter monitor recording. A magnetic resonance angiogram of the brain and carotid Doppler measurements were normal.

The patient was subsequently anticoagulated with warfarin and discharged the following week. Follow-up 4 weeks later revealed persistence of the right homonymous hemiachromatopsia and no other neurological signs.

Isolated hemiachromatopsia is an easily missed clinical finding, and the affected individual may not be aware of the visual defect.1,2 This is particularly pertinent among older patients, such as the patient discussed in the article, who may present with nonspecific visual complaints. Discharging a patient from a healthcare facility rapidly or prematurely without conducting a full examination could have potentially hazardous consequences, such as allowing an infarct and associated cardioembolic risk factors to be missed, which could damage the patient further in the future if not actively addressed. A typical example is the use of Holter monitoring in the case patient, which detected episodes of paraxyosmal atrial fibrillation, indicating that the patient’s stroke most likely had a thromboembolic etiology. This patient was subsequently anticoagulated with warfarin to reduce the risk of future episodes. It is important to note that the majority of lesions corresponding with such a visual defect seem to occur in the distribution of the posterior cerebral artery, and the most common cause of the lesions is probably embolic infarction in the lateral branch of the artery.2

The case patient’s mildly elevated ESR of 47 mm/h was not considered relevant to her presenting symptom of visual disturbance and was not unexpected given her advanced age and preexisting diagnoses of rheumatoid arthritis and polymyalgia rheumatica. The positive VDRL test was likely a false-positive result and, again, possibly attributable to the patient’s rheumatoid arthritis. The low likelihood of treponemal infection was further confirmed by a negative Treponema pallidum hemagglutination (TPHA) test.

Color perception should always be tested in patients with a history of visual disturbance. This is important for an accurate assessment of the patient’s impairments for diagnostic reasons and therapeutic purposes, including appropriate rehabilitation strategies.3 Often, a simple explanation for their visual symptoms is reassuring for patients, and it enables them to find ways of managing the condition.

A review of the literature on hemiachromatopsia suggests that some common presenting symptoms of the condition are easy fatigability when reading, defects in color perception, prosopagnosia (inability to recognize faces), and nonspecific visual disturbance.1-4 Less common symptoms include nystagmus (involuntary rapid movement of the eyes) and photophobia (painful sensitivity to light).

Although formal color perimetry is probably the best diagnostic test,4 it is clearly impractical in the acute setting because it requires trained technicians and specialized equipment to administer. The case presentation demonstrates that hemiachromatopsia can be detected very easily with informal color testing—initially simply by introducing colored objects into all four quadrants of the visual field and asking the patient to indicate when the object comes into view and to describe what color he or she perceives. Further clarification of color perception can be obtained using Ishihara colored plates, which are usually readily available in any inpatient setting; color perimetry can subsequently be used to confirm the diagnosis if required. Tests such as the Farnsworth-Munsell 100-hue test, where one is asked to organize colors in order according to hue, are also simple to administer, inexpensive, and relatively sensitive.

It is important to note that hemiachromatopsia can occur as a residual defect some time after an initial presentation with homonymous hemianopia secondary to cerebral infarction.3,4 Repeat visual field testing after an interval period may show resolution of the hemianopia with full perception of form and movement in all quadrants of the visual field, yet patients may report ongoing and even new visual difficulties.1,4 The initial finding in the case patient, for example, was a right homonymous hemianopia, and rapid resolution and isolated right hemiachromatopsia were evident only 3 days later. Because the inferotemporal cortex is in close proximity to the inferior optic radiations and the inferior striate cortex, an injury that initially extends into these areas would easily explain an initial hemifield loss of vision.

This patient’s case demonstrates that lesions of the lingual and occipitotemporal gyri can affect color vision while leaving visual form and perception intact. This lends evidence to a small number of case reports and positron-emission tomography studies suggesting that lingual and fusiform gyri represent an area specialized for color processing1-5 and illustrates that lesions outside the primary visual cortex can cause defects in color vision. Ablation of the inferior occipitotemporal lobe also produces similar defects, lending further support to this theory.5

It is worth noting that the majority of case reports in the literature describe achromatopsia (inability to see color) in association with a number of other defects, predominantly prosopagnosia (inability to recognize faces) and alexia (inability to read).1,3,6 Our case presentation highlights that hemiachromatopsia can, in fact, be a specific syndrome occurring in isolation and that one cannot rely on the presence of symptoms other than loss of color vision in one-half of the visual field to make a prompt and accurate identification.

Isolated hemiachromatopsia can easily be missed, and the affected individual may not be aware of the visual field defect. This is particularly true for older patients, who, like the case patient discussed in this article, may present with nonspecific visual complaints. Color perception should always be tested for in patients with a history of visual disturbance. This is important for an accurate determination of patients’ impairments for diagnostic and therapeutic reasons, including establishing appropriate rehabilitation strategies.