Celiac Disease or More? A Boy With a Trichophytobezoar

A 4-year-old boy presented with a 3-week history of intermittent nonbloody diarrhea, nonradiating periumbilical abdominal pain that was relieved by passing stool, and a 1.8-kg weight loss. No vomiting, fever, joint pain, or rashes were reported.

The boy’s past medical history was unremarkable, and his family and social history were noncontributory. He had no known allergies. Review of 13 systems was significant for intermittent constipation, large-caliber blood-tinged stools, straining and pain with defecation, and underwear soiling.

Physical examination findings were unremarkable except for the presence of abundant, firm stool felt in the rectal ampulla. The boy’s weight (19.5 kg) and height (110.5 cm) were in the 75th percentile for his age. Vitals signs, including temperature, heart rate, respiratory rate, and blood pressure, were normal. 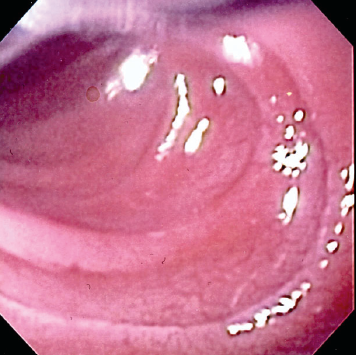 Endoscopy with biopsy was performed, revealing duodenal scalloping (Figure 1). Findings of biopsies of the small intestine were consistent with a gluten-sensitive enteropathy. Endoscopy also revealed a large trichophytobezoar in the stomach composed of white string, red-brown hair, and vegetative material. The bezoar was impossible to remove endoscopically; therefore, laparoscopic gastrotomy with bezoar removal was performed without complication (Figure 2). The extracted trichophytobezoar measured 6.4 cm × 3.5 cm × 2.7 cm (Figure 3). Notably, only after the bezoar was found did the mother mention that the patient occasionally chewed on nonfood substances.

Polyethylene glycol 3350 powder was initiated after surgery to treat the stool impaction. Ferrous sulfate and a gluten-free diet also were started. At the 2-week postdischarge follow-up visit, the patient had improved; he reported having had soft, daily bowel movements, and his pica had resolved. 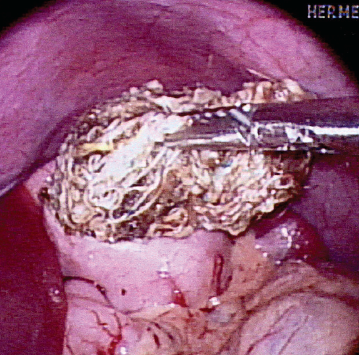 Figure 2. A large trichophytobezoar was removed without complication by way of laparoscopic gastrotomy.

Bezoars, caused by the ingestion and accrual of indigestible foreign matter in the gastrointestinal tract, have been documented in human beings for centuries.1 A variety of bezoar types exist, including phytobezoars, consisting of cellulose and indigestible plant material; neonatal lactobezoars, containing milk products such as casein; and bezoars from difficult-to-digest medications, incompletely chewed food, or nonfood items such as glue or paste.1 A trichobezoar may contain hair, string, or fabric and is one of the most common bezoar types in children.2 The ultimate goal for bezoar treatment, after removal, is deterring recurrence; thus, accurate bezoar classification is helpful in prevention.3

Pediatric patients diagnosed with trichobezoar frequently have normal gastrointestinal function, but have obsessive or anxiety-driven behavior leading to trichotillomania, where they pull their hair and then eat it (trichophagia).3,4 Psychiatric care can be helpful in managing trichotillomania and in decreasing bezoar recurrence.5 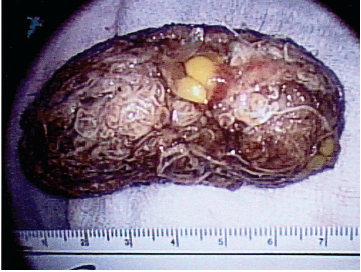 Although our patient demonstrated pica behavior, he had no psychological problems, and his pica resolved with ferrous sulfate therapy. Therefore, the pica likely was a result of iron deficiency created by the malabsorptive pathology of his celiac disease.6 Our patient’s trichophagia was revealed only after the bezoar had been found, supporting findings in the medical literature showing that a history of trichophagia is obtained in only 50% of cases prior to trichobezoar discovery.2,5 This observation emphasizes the helpfulness of asking directly whether a child is ingesting nonfood substances. Stigma or shame may prevent parents from openly offering a trichophagia history unless questions are asked outright.

While endoscopy is the most effective method of bezoar diagnosis, most trichobezoars are too large for endoscopic removal, as in our patient’s case, and require extraction by way of surgical gastrotomy.7,8

Laura Stewart, MD, is in the Department of Pediatrics at St. John Hospital and Medical Center in Detroit, Michigan.

Abdelkader Hawasli, MD, is in the Department of Surgery at St. John Hospital and Medical Center.

Hernando Lyons, MD, is in the Department of Pediatrics at St. John Hospital and Medical Center.

2. DeBakey M, Ochsner A. Bezoars and concretions: a comprehensive review of the literature with an analysis of 303 collected cases and a presentation of 8 additional cases. Surgery. 1938;4(6):934-963.