While playing on a brick walkway in her backyard, a 4-year-old girl stepped on a puss caterpillar and was stung. The ecchymosis exactly outlined the caterpillar's spines and remained visible for at least 3 months. The initial sting caused intense pain that lasted for more than an hour.

Mature puss caterpillars--which grow to an inch in length--are covered with gray to brown hairs, under which are stiff spines that are attached to glands that contain poison. When touched, these spines break off in the skin, where they cause severe pain.

Duct tape was repeatedly applied to the child's foot in an effort to extract any embedded spines. The wound was then iced, and the patient was given ibuprofen( and acetaminophen. After the pain subsided, she did fairly well. Four days after the bite, some swelling and itching developed at the wound site. These symptoms persisted for about 1 week and were treated symptomatically. * 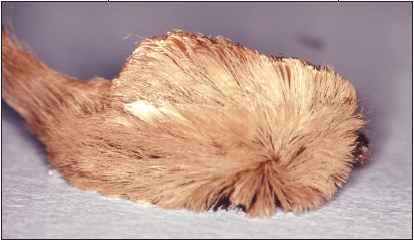