Dr Cohen and Dr Pickens are pediatric residents and Dr Zaid Kaylani is a pediatric hematology oncology fellow, all at the University of Alabama at Birmingham, Children’s of Alabama.

A 10-year-old white girl presented with soft-tissue swelling in the upper medial left thigh that had developed over 3 days. Three weeks before presentation, she had sustained a burn from a curling iron on her anterior left shin, after which an increasing area of erythema had developed surrounding the wound. Her temperature was 39.6°C (103.2°F) at presentation. Physical examination revealed an ulcerated lesion over the left anterior shin with a 0.5-cm area of surrounding erythema and multiple, superficial lacerations over the left lower extremity. Palpation of the upper, medial left side of the thigh demonstrated tender soft-tissue swelling with overlying erythema. She had tender left inguinal lymphadenopathy. Initial laboratory test results showed a platelet count of 4,000/µL, a leukocyte count of 13,000/µL, and a normal hematocrit level. Lactate dehydrogenase (LDH) and uric acid levels were not elevated. Chest radiographs did not demonstrate mediastinal widening.

Additional imaging studies included left lower-extremity ultrasonography, which showed an enlarged and hypervascular lymph node in the left groin measuring approximately 2.9 × 1.7 × 2.0 cm, with a small amount of surrounding subcutaneous edema (Figure 1). In addition, T1-weighted magnetic resonance imaging (MRI) of the left lower extremity showed multiple enlarged left pelvic and inguinal lymph nodes consistent with reactive adenopathy (Figure 2). Further history, obtained after ultrasonography and MRI of the leg lesion raised suspicion for cat-scratch disease (CSD), revealed that the patient had exposure to numerous cats and that she had been scratched on her left lower leg 1 week before presentation. 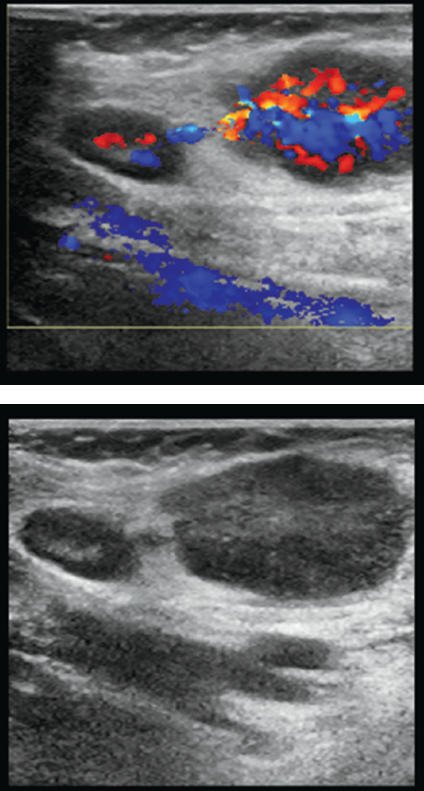 An antibiotic regimen of vancomycin and gentamicin was initiated to cover Gram-positive organisms (due to shin cellulitis), with gentamicin to cover possible invasive Bartonella henselae. In addition, the patient was given 1 dose of 1 g/kg intravenous immunoglobulin (IVIG) on the day of admission as empiric treatment for idiopathic thrombocytopenic purpura. The next day, her platelet count had risen to 22,000/µL. After a second dose of IVIG, her platelet count rose to 40,000/µL. Blood cultures were negative. B henselae titers were positive (immunoglobulin G, 1:128; immunoglobulin M, 1:20). The antimicrobial regimen was changed to oral clindamycin and azithromycin on the fourth day of hospitalization (to be continued as an outpatient for a total 10 days). Her platelet count continued to rise daily and was 105,000/µL on the fifth day of hospitalization. Upon discharge, the soft-tissue swelling in her left groin had decreased in size, and the left inguinal adenopathy was no longer tender. 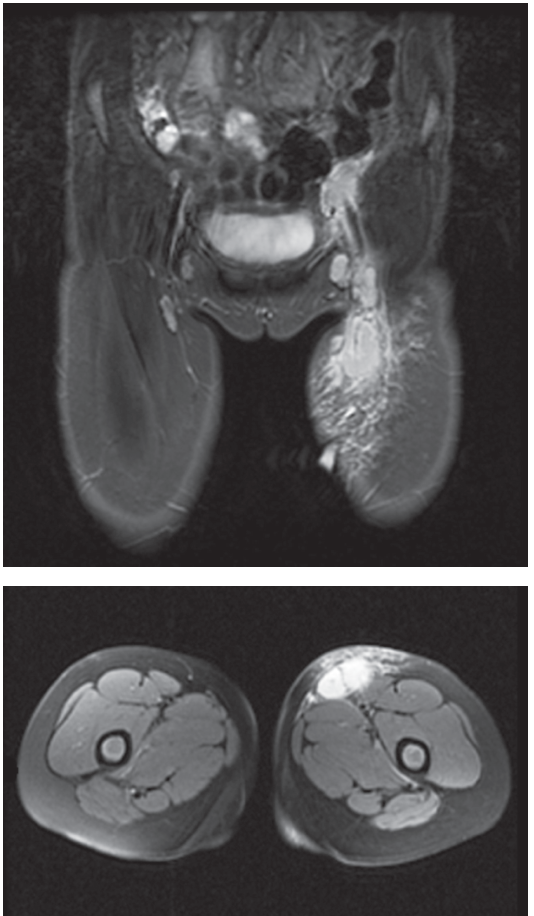 An 8-year-old white boy presented to his primary care physician with a 3-day history of swelling under the left jaw. The patient had no recent fever or other illness before presentation. Diffuse bruising and petechiae were noted on physical examination. Neck examination was notable for a left submandibular lymph node measuring 3 × 3 × 2 cm. The node was tender to palpation and slightly firm yet freely movable. Results of initial laboratory tests showed a platelet count of 3,000/µL. The patient was admitted to the hospital for thrombocytopenia secondary to thrombocytopenic purpura versus a malignant process. Complete blood count on admission was within normal limits except for a platelet count of 17,000/µL. LDH and uric acid levels were not elevated. The patient was given 1 dose of 1 g/kg IVIG. The following day, his platelet count had dropped to 13,000/µL; he was given a second dose of IVIG, after which his platelet count rose to 81,000/µL. At that time, he was discharged home. At a follow-up visit 3 days after discharge, the patient’s platelet count had risen substantially to 514,000/µL; at that time, additional history was obtained, and the patient revealed that he had had exposure to cats before the hospitalization. B henselae IgG titer showed evidence of recent infection at 1:1,024.

B henselae is a small, pleomorphic, fastidious Gram-negative bacillus transmitted to cats by the cat flea (Ctenocephalides felis). Cats then develop Bartonella bacteremia that may be present for months without clinical manifestations.1 Humans are infected by cats via cutaneous inoculation, leading to CSD. Following an incubation period of 7 to 12 days, one or more 3- to 5-mm erythematous papules appear at the site of inoculation. Low-grade fever, weight loss, myalgia, and lymphadenopathy typically manifest in 1 to 12 weeks.1,2 Other clinical manifestations of CSD include Parinaud oculoglandular syndrome (6.1% of cases), encephalopathy (2.4%), erythema nodosum (0.7%), osteomyelitis (0.3%), hepatosplenomegaly (0.3%), and primary atypical pneumonia (0.1%). Although rarely reported, thrombocytopenic purpura (0.3% of cases) also may be associated with CSD.3,4 Most often, the diagnosis of CSD is based on clinical suspicion, although laboratory tests may be used to aid diagnosis.

Basic laboratory tests, including leukocyte count, hepatic transaminase levels, and erythrocyte sedimentation rate, may be normal or mildly elevated. Enzyme immunoassay (for immunoglobulin M or G antibodies) and indirect immunofluorescence assay (IFA) may be used to diagnose CSD. Ultrasonography, computed tomography, and MRI may demonstrate hypervascular lymph nodes and/or granulomatous nodules in the liver and/or spleen.1 Histologic examination of affected tissues may demonstrate lymphoid hyperplasia, arteriolar proliferation, and granulomas with occasional multinucleated giant cells.5 CSD in immunocompetent hosts often is self-limited and requires only supportive care. In CSD that is refractory to supportive care, macrolides, rifampin, ciprofloxacin, gentamicin, or doxycycline may be used.5 Suppurative lymphadenopathy may be treated with needle aspiration to decrease pain and provide tissue for diagnosis. However, lesions should not undergo incision and drainage because of the risk of prolonged drainage and the formation of sinus tracts.5 The prognosis is good, and most patients have complete recovery in 2 to 4 months.5

Immune thrombocytopenia is an autoimmune disorder leading to platelet destruction. It often is seen secondary to various infections and drug exposures, and it is defined as a platelet count of less than 100 × 103/µL.6 Physical examination often reveals scattered petechiae and ecchymosis, along with mucocutaneous bleeding and wet purpura. Findings that may indicate a different diagnosis include hepatosplenomegaly, lymphadenopathy, fever, weight loss, and abnormal hemoglobin or leukocyte levels.7 A peripheral blood smear may show enlarged platelets; bone marrow examination may not be necessary in the evaluation of isolated thrombocytopenia. Presenting platelet counts usually are less than 20 × 103/µL; counts greater than 30 × 103/µL frequently are associated with limited symptoms. Initial pharmacologic management of immune thrombocytopenia in the pediatric setting includes a short course of corticosteroids and/or IVIG.6 In addition, the use of anti-D immunoglobulin has been shown to have benefit in Rh-positive children, although it has a known risk of life-threatening hemolytic anemia.8 Immune thrombocytopenia with refractory or persistent disease despite first-line treatment may benefit from rituximab, high-dose dexamethasone (in older children), or ultimately splenectomy.6

Immune thrombocytopenia is a rare complication of B henselae infection. The pathogen’s mechanism of inducing thrombocytopenia is unknown; possibilities include direct toxicity to megakaryocytes limiting platelet production, or indirect autoimmune destruction of platelets in the peripheral bloodstream. Thrombocytopenia is mentioned in the literature mainly as isolated case reports.9-12 Both of the patients described here responded to treatment, one with antibiotics and IVIG and the other with IVIG only. IVIG is a promising therapy for CSD-associated immune thrombocytopenia.13,14 Note that neither of the patients described here required bone marrow examination, since both responded to conservative therapy with IVIG. Antibiotics were used in the first case to treat complications of the CSD (cellulitis and suppurative lymph nodes) and are believed not to have influenced the thrombocytopenia.

Both patients were followed in clinic after discharge; one has shown complete resolution of all symptoms, while the other continues to show asymptomatic moderate thrombocytopenia.n