Case in Point: An Unexpected Case of Intestinal Ischemia

A 5-month-old boy presented to the emergency department (ED) with sudden onset nonbloody, nonbilious vomiting. The vomiting was associated with feedings and was accompanied by fever and lethargy. In the ED, the boy was febrile, with a temperature of 38.2°C, and tachycardic, with a heart rate of 190 beats/min.

Physical examination results were significant for lethargy, dry mucous membranes, and grunting without increased work of breathing or adventitious lung sounds. His abdomen had normoactive bowel sounds, mild distention, generalized tenderness, and rigidity. Prior to presentation the boy had been healthy. He had been born at full term.

Initial management included fluid resuscitation and broad-spectrum antibiotics. After consultation with a pediatric surgeon, the patient was taken to the operating room for a diagnostic laparoscopy, which was converted to a laparotomy after visualization of ischemic bowel (Figure 3). A Meckel diverticulum was found with strangulated blood supply to the distal ileum resulting in 55 cm of necrotic bowel. The small bowel was detorsed, and the necrotic ileum and cecum, including the ileocecal valve, were resected with reanastomosis of the remaining bowel. 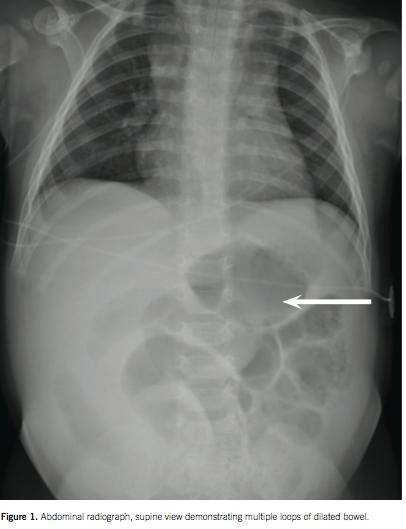 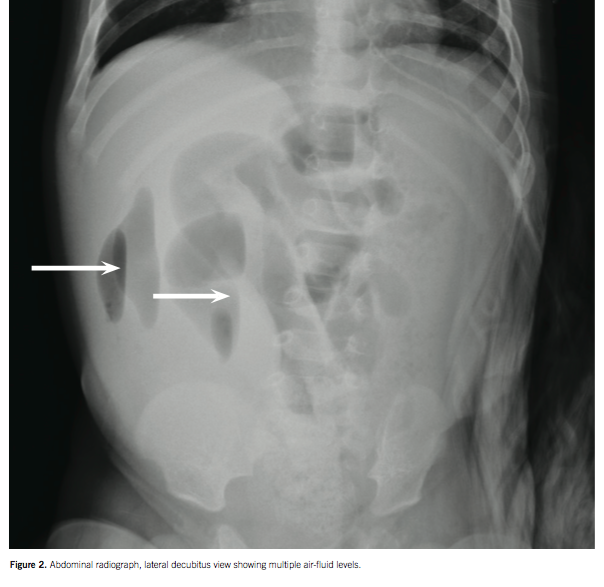 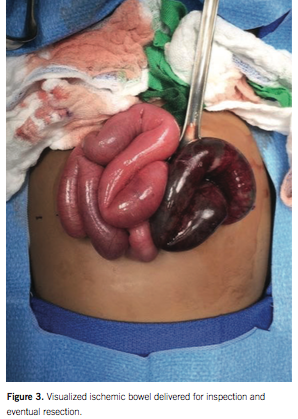 This case demonstrates a potential complication of Meckel diverticulum, a vitelline duct remnant with an estimated general population prevalence of 2%. Most cases are asymptomatic, but complications can present acutely with bowel obstruction, diverticulitis, or hemorrhage.1,2

Bowel obstruction can lead to acute intestinal ischemia, which is a medical emergency due to a high rate of mortality and morbidity if diagnosis is delayed. However, diagnosis is difficult and relies on laboratory investigation, radiologic studies, and nonspecific clinical findings, which are especially challenging in the noncommunicative infant.

The utility of traditional biomarkers of inflammation, tissue ischemia, and nonspecific small bowel enzymes, including CRP, lactate, lactic acid dehydrogenase, and aspartate aminotransferase may be limited in the diagnosis of early intestinal ischemia.3-5 This is demonstrated in studies looking at nonvascular causes of intestinal ischemia, such as strangulated bowel obstruction, where biomarker levels were similar to cases of nonischemic diseases.5 The lack of elevation of these levels may be the result of restricted entry of biomarkers into circulation during the early stages of a closed-loop bowel obstruction because of impairment of venous outflow. Thus, we may not be able to rely on laboratory test results to diagnose patients who present with suspected bowel ischemia of nonvascular origin.

Imaging studies may aid in the diagnosis of Meckel diverticulum, but their reliability varies and is highly subject to the skill of the reader. Contrast CT has a 52% to 100% sensitivity, 61% to 93% specificity, 72% to 88% positive predicted value, and 93% to 100% negative predicted value in diagnosing strangulated bowel.6,7 Typical findings in a closed loop obstruction include unique C- or U-shaped distended fluid-filled loops at the obstructed site, bowel wall thickening indicative of strangulation, and proximal gas-distended loops.6-8 Ascites is common.

Ultimately, timely assessment by an experienced surgeon remains an important intervention in early diagnosis of a closed-loop bowel obstruction, especially in cases where clinical suspicion is high but imaging is equivocal and laboratory results misleading.

Hanh K. Le, MD, MS, is a third-year pediatrics resident in the Department of Internal Medicine and Pediatrics at Children’s Hospital of Richmond at Virginia Commonwealth University.

Clifton C. Lee, MD, FAAP, SFHM, is an Associate Professor of Pediatrics and Chief of Pediatric Hospital Medicine in the Department of Pediatrics at Children’s Hospital of Richmond at Virginia Commonwealth University.