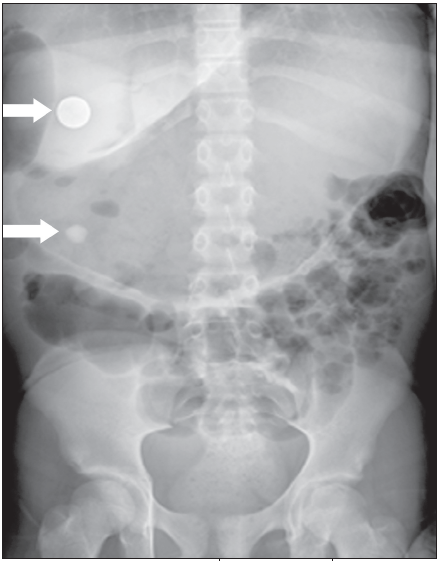 A 14-year-old girl was referred for evaluation of a several-year history of growth failure, chronic abdominal pain, and intermittent emesis. The parents described the child as a "picky eater," and various foods (eg, meat products and beans) frequently caused abdominal distention. The patient had gastroesophageal reflux symptoms during the first 2 months of life; results of an upper GI series performed at that time were normal. Family history was noncontributory. The patient had a twin brother who had normal growth parameters.

The patient's current height and weight were less than 2 standard deviations below the 5th percentile for age. Her abdomen was soft and nontender. However, the epigastric region appeared to be moderately distended and was tympanic to percussion. Bowel sounds were normal; no palpable masses or hepatosplenomegaly was noted. Results of blood tests, including a complete blood cell count, erythrocyte sedimentation rate, thyroid function tests, serum electrolytes, serum transaminases, amylase, and lipase, were within normal limits. 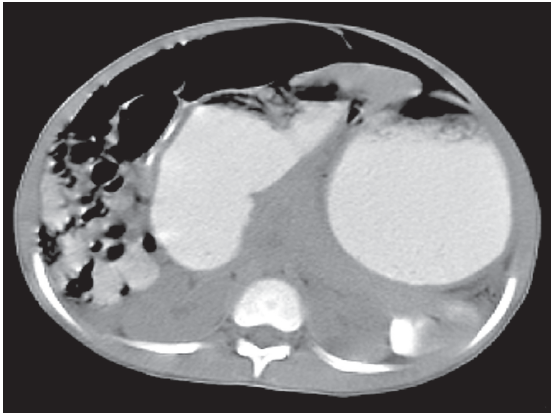 During upper endoscopy, a penny and a pebble were removed from the duodenum with a rat tooth forceps and retrieval basket. A duodenal web with a 5-mm orifice to the intestine was visualized after the foreign bodies were removed (Figure 3). A subsequent upper GI barium series revealed a malrotation.

The patient underwent excision of the duodenal web, duodenoduodenostomy, and division of the Ladd bands. She is currently eating well with no abdominal symptoms. Her growth parameters have normalized to some degree. 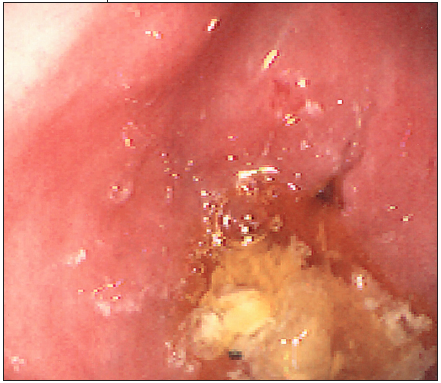 Duodenal webs are congenital and are thought to result from failure of duodenal recanalization during embryogenesis. Symptoms may be insidious; duodenal webs can present at any age with symptoms of gastric outlet obstruction.1

PCI is a rare entity characterized by emphysematous bowel wall changes consistent with gas-filled cysts.2,3 In asymptomatic patients, PCI is often found incidentally as a primary condition; however, secondary causes of pneumatosis, such as a gastric bezoar, have been described.4,5 Although PCI is most typically associated with necrotizing enterocolitis in premature infants, it also may be found in otherwise healthy pediatric patients and in children with underlying pathology (from, for instance, bone marrow transplantation, congenital heart disease, intestinal motility disorders, short-bowel syndrome, and gastroschisis).6

Treatment may be unnecessary in asymptomatic patients with PCI, although hyperbaric oxygen therapy and antibiotics, such as metronidazole(, have been used with variable success.2,4 Patients with an obstructive cause of PCI--duodenal stenosis or a duodenal web--require immediate surgical correction.3

The constellation of findings of PCI, duodenal web, and malrotation in this patient is unusual. Unlike a previous case report of an infant with Down syndrome and associated gastric pneumatosis, duodenal stenosis, and malrotation, this teenager had no underlying chromosomal disorder and presented at a substantially older age.3

The duodenal web may have contributed to this patient's presentation with PCI. A barium upper GI series is the typical method of determining its presence, although expertise is often necessary to visualize an obstructing web using fluoroscopic findings, such as the "duo- denal dimple."7

Older children and adults with duodenal webs can present with abdominal pain and distention as well as electrolyte disturbances, including hyponatremia.8,9 Because abdominal pain is also associated with PCI, it is difficult to determine whether the pain experienced by this patient was secondary to the PCI, the duodenal web, or a combination of both.10

In addition, the foreign bodies removed during endoscopy were probably present for a long period. Their inability to clear the duodenum may have led to a ball-valve effect, which accentuated gastric distention and may have precipitated gas dissection into the stomach and intestinal wall.

• Duodenal webs can present at any age with symptoms consistent with gastric outlet obstruction.

• PCI is generally a benign finding. However, it can occur with serious underlying medical conditions.

• Although PCI may respond to medical therapy, surgical intervention is often required when an obstruction is present.