A 4-year-old girl presented with “spinning” thoughts of about 2 weeks’ duration. The girl had initially been seen by her primary care provider, who had diagnosed her as having generalized anxiety and had initiated hydroxyzine 10 mg up to 4 times daily. She had responded well to the hydroxyzine, with some relief from the troublesome thoughts, but the therapeutic effects had lasted fewer than 6 hours. After 4 days, she was referred to a pediatrician.

Examination results revealed that the girl was troubled by persistent thoughts about trees falling on her (Figure) and had become afraid of leaving the house. She was fearful of going to school or into public places because she was afraid that she would shoot laser bolts from her eyes. In addition, when she saw someone wearing glasses, she became afraid that she would break them. Bedtime became difficult because she felt overwhelmed by the troubling thoughts and was afraid to sleep alone. She would cling to her parents at night in an attempt to transfer the thoughts to them. She had developed a coping mechanism of “pulling thoughts” from her mind with a gesture at her forehead, and throwing them to her father, whom she believed could better handle them. Although her appetite had not changed, she had become noticeably less active and more fatigued.

Her past medical and family history were noncontributory. She was a full-term infant with unremarkable growth and development. Her immunizations were current, and she had no antecedent illness prior to the emergence of the intrusive thoughts. Her parents described her previous demeanor as mildly anxious. She was the only child of married parents, and there was no report of emotional or social upheaval in the home. In a few months, she was due to start kindergarten and had been expressing some anxiety about the transition prior to the onset of her illness.

Physical examination results revealed that her vital signs were normal and her growth parameters were at the 75th percentile for height and the 70th percentile for weight. She was well groomed and well dressed. Her eye contact was good, but she appeared wary of the examiner. She frequently made a motion of pulling thoughts from her head to toss them to her dad, and she often whispered to her parents. The girl readily answered questions and was cooperative. The rest of the examination results were unremarkable.

Based on the girl’s behavior and intrusive thoughts, the pediatrician diagnosed her as having obsessive-compulsive disorder (OCD). She was subsequently prescribed fluoxetine 5 mg daily and began psychotherapy. Hydroxyzine was continued briefly as needed at bedtime. Over the course of several weeks, she was able to gradually return to school and normal functioning. 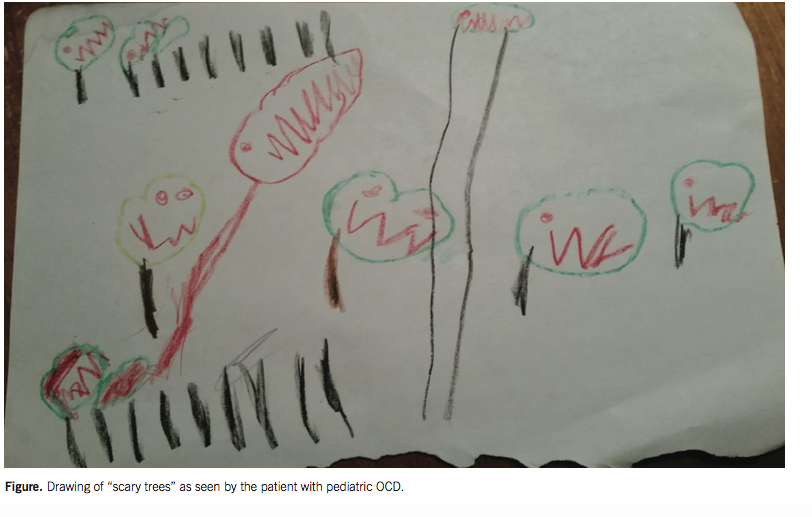 OCD is a disorder characterized by unwanted, intrusive thoughts coupled with repetitive, intensely driven behaviors performed in an effort to diminish the thoughts. Functional impairment must be present to make the diagnosis. The prevalence of OCD in pediatric patients is estimated to be 1% to 4%.1,2 More than half of adults with OCD experienced the onset of the disorder in childhood.1 Prior to puberty, the male-to-female ratio for OCD is approximately 3 to 2. After puberty the ratio shifts, and both sexes are equally affected, with a slightly higher rate among females.1

Neurobiologic factors in the etiology of OCD have been demonstrated in numerous studies. One consistent area of dysfunction appears to be in the fronto-striato-thalamic circuits as they route through the orbitofrontal cortex (OFC). Researchers found that when the OFC-ventral striatum (OFC-VS) projections in mice are overstimulated, OCD-like behaviors result.3 OCD symptoms are also more prevalent in other diseases, such as Tourette syndrome, Huntington disease, Sydenham chorea, and anorexia nervosa.4

Genetic factors are implicated in the etiology of OCD in several studies. First-degree family members of probands have a 10% to 35% incidence of developing OCD. Heritability studies show that monozygotic twins have a 50% to 60% concordance, compared with a 10% concordance among dizygotic twins.5 A candidate gene for OCD is located on chromosome 9 (9p24).5

The Diagnostic and Statistical Manual of Mental Disorders, Fifth Edition criteria define obsessive thoughts as persistent, recurrent, intrusive, and inappropriate.6 These thoughts cause marked anxiety or distress, and they are not simply excessive worries about realistic problems. Children generally do well with structure and routines, but the thoughts and behaviors in OCD significantly interfere with a person’s normal routine, occupational or academic functioning, social activities, or relationships. Compulsions are either repetitive behaviors or mental acts, such as counting or repeating words silently, that the child feels compelled to perform to reduce distress.

In children, compulsions tend to fall into 4 major categories.5 These categories include symmetry (counting in repetitive patterns, lining up rows of objects), hoarding, forbidden thoughts (worrying about violent behavior toward another), and cleaning. The diagnosis is excluded if the obsessions and compulsions occur within the confines of another disorder, such as anorexia nervosa.

Inter-rater agreement for OCD symptom impairment has been reported as moderate between parents and children. Younger children tend to have less insight into their symptomatology and may underreport their symptoms, so it is important to take a careful history from the caregivers involved.7 The Child Yale-Brown Obsessive-Compulsive Scale8 is used by most research teams to assess OCD symptoms in children and adolescents, but it is administered by a clinician. Other assessment tools, such as the Leyton Obsessional Inventory-Child Version or the Children’s Obsessional Compulsive Inventory, may be more useful as screening tools that can be self-administered.9 These tools are helpful in assessing the severity of the disorder but are not necessary in making a diagnosis.

Several studies have evaluated the outcomes of children with OCD. Stewart and colleagues conducted a meta-analysis and found that 41% of children with a diagnosis of full-blown OCD had symptoms that persisted into adulthood. When children with subthreshold OCD were included, that percentage climbed to 60%. Traits that increased the likelihood of persistent OCD were younger age of onset, longer duration of symptoms, and inpatient status. Comorbid psychiatric illness and poor initial treatment response were also associated with more persistent symptoms.10

In 2012, the American Academy of Child and Adolescent Psychiatry (AACAP) published practice parameters for children and adolescents with OCD. Cognitive behavioral therapy (CBT) with exposure response prevention (ERP) was the preferred treatment for mild-to-moderate cases of OCD in children.13 ERP exposes the child to the feared stimulus and attempts to decrease the anxiety across exposure trials. Freeman studied CBT vs relaxation therapy for young children aged 5 to 8 years with OCD, and they found that 72% were improved or very much improved with CBT, whereas 41% improved with relaxation therapy.14

Selective serotonin reuptake inhibitors (SSRIs) are recommended in the AACAP practice parameters for children and adolescents whose OCD symptoms are moderate to severe.14 SSRIs are typically prescribed at higher doses to treat OCD than to treat depression. Second-line medications include clomipramine, buspirone, benzodiazepines, and atypical and typical antipsychotics.15

When medications are prescribed, they are recommended as an addition to ongoing CBT, as they may decrease anxiety and improve a child’s ability to tolerate ERP. Our patient was initially prescribed hydroxyzine by her primary care provider. Although hydroxyzine is not indicated for OCD, it does have a pediatric indication for anxiety, which was the initial diagnosis. As the girl was tolerating this medication, and it helped her to sleep at night, it was continued temporarily at bedtime until she improved.

The AACAP practice parameters do not specifically address whether children with OCD should be evaluated and treated by their primary care providers or referred to a child psychiatrist. However, it is the author’s opinion that a primary care provider who is comfortable prescribing SSRIs may initiate treatment, working in conjunction with a trained psychotherapist. If the child is not responding to adequate treatment as defined in the AACAP guidelines, referral to a child psychiatrist should be made.

Jennifer Seidenberg, MD, is an Assistant Professor at the Penn State Hershey Medical Group in the division of Adolescent Medicine and Eating Disorders, in State
College, Pennsylvania.

3. Yoshinari A. Hyper-influence of the orbitofrontal cortex over the ventral striatum in obsessive-compulsive disorder. Eur Neuropsychopharmacol. 2015:25(11):1898-1905.