Cartoons and Cigarettes: A Careless Combination

Dr Nield is associate professor of pediatrics at West Virginia University School of Medicine in Morgantown. She is also a member of the editorial board of CONSULTANT FOR PEDIATRICIANS.

Cartoons and Cigarettes: A Careless Combination

The dangers of cigarettes have been discussed in schools for years, even decades. Health class demonstrations that include photos of black lungs and individuals with half their faces eroded from oral cancer have not completely discouraged the smoking habit. Despite all of the anti-smoking propaganda, almost 4000 children aged 12 to 17 years light their first cigarette each day in the United States and about 1000 become daily smokers.1

Last month marked the fifth anniversary of the death of a close relative who died in my home with hospice care. The underlying diagnosis was lung cancer secondary to habitual smoking that began in his teenage years. My children witnessed much of his endstage suffering. Will this experience deter my children from future smoking? I have asked teenage patients, “Why do you smoke, when you’ve seen and heard all these bad things about smoking?” The most common response is, “I don’t know.” When I ask nonsmoking teens why they think their peers smoke, the most common response is, “They think they’re being cool.” Although the smoking teens themselves cannot explain why they smoke, research and common sense tells us that many influences lead to the smoking habit, including the media. 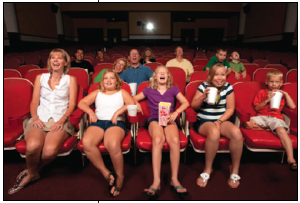 In February, children’s health advocacy groups, including the American Academy of Pediatrics, spoke out about the need to eliminate smoking references in movies intended for young audiences and called for the
requirement of an “R” rating when tobacco use is included in a movie.2 The recent impetus for the “R” rating
is the release of a new animated film that includes some tobacco-using characters. It is obvious that cigarettes and children’s cartoons are a careless combination. Cigarettes don’t belong in children’s cartoons, nor does violence or sexual innuendos. Other story features such as revenge and traumatic deaths are not so childfriendly; however, they often make an appearance in kid flicks. These probably help keep the interest of the adults who must pay for the tickets and sit through the hour and a half production. An “R” rating on films that include such features may very well deter filmmakers from producing them, if it will prevent parents from spending their hard-earned cash at the theater.

I am not convinced, though, that the “R” rating solely for the inclusion of smoking references would deter parents. Perhaps our efforts should be put toward the “R” of Research or Reading reviews? We can encourage parents to do a little research about the particular movie and—after knowing what exposures will be encountered—decide whether it is acceptable viewing material for their children. Whether the young child views a cartoon character light up a cigarette or spies a teen or adult take a puff on the sidelines at a soccer game, the opportunity to dialogue with children about the badness of choosing to smoke—or do other objectionable behaviors depicted on the big screen or in real life—should not be wasted. ■