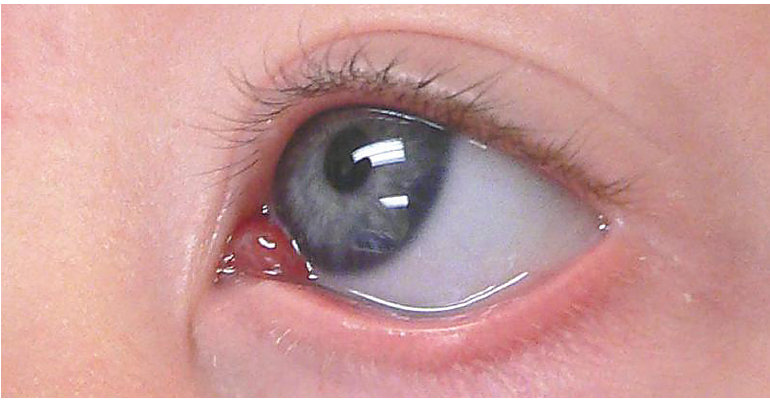 The parents of a 2-month-old infant were concerned about a gradually enlarging reddish mass in the inner canthus of their daughter’s left eye. The 3-cm mass had been present for several weeks. It became engorged when the child cried or strained.

No eye discharge was noted. Both eyes were otherwise normal. Other physical examination findings were unremarkable. The clinical diagnosis was capillary hemangioma, the most common type of hemangioma.

Capillary hemangiomas typically present within the first 6 months of life and often swell with crying and straining. They develop more commonly on the palpebral and fornical conjunctiva. Spontaneous regression is common after a year. Patients with a periocular capillary hemangioma need to be evaluated for astigmatism and amblyopia—especially when the lesion is extensive and involves the orbit or eyelid.

•A lymphangioma can be difficult to distinguish from a hemangioma; however, the former usually presents within the first 6 to 18 months of life and is characterized by slower growth. Lymphangiomas enlarge prominently with upper respiratory tract symptoms. These lesions are bluer than capillary hemangiomas and bleed easily.

•An encephalocele is usually located at midline on the nasal bridge. The gap enlarges with crying and straining but does not spontaneously regress; it may be pulsatile.

•A dacryocystocele (mucocele) develops at birth or within the first week of life. The lesion is usually located below the medial canthal ligament; crying or straining does not alter its size. Because newborns are obligate nose breathers, bilateral dacryocystoceles can interfere with breathing. Overflowing tears with associated signs of nasal lacrimal duct obstruction begin at about 2 or 3 weeks.

•A chalazion—characteristically a firm, nontender nodule in the upper or lower eyelid—tends to be chronic.

•A hordeolum is accompanied by acute inflammatory signs.

This patient was advised to follow up with an ophthalmologist. Six months later, the lesion had regressed.