An 18-year-old boy presented to the emergency department (ED) with sudden-onset nausea, retrosternal chest pain, and vomiting that had been occurring more than 10 times a day for the last 4 days. The night before the onset of symptoms, he had smoked 8 blunts (hollowed out cigars filled with marijuana), had taken half a tablet of ecstasy (3,4-methylenedioxy-N-methylamphetamine, or MDMA), and had drunk a cup of vodka. The next morning, he developed a sore throat followed by nausea and vomiting. He admitted to the use of 15 to 20 marijuana blunts per day for the last 4 years with occasional use of alcohol and ecstasy.

Physical examination findings were unremarkable except for mild epigastric tenderness. Urinalysis was positive for cannabinoids. Results of a serum electrolyte panel showed a potassium level of 3 mEq/L and a bicarbonate level of 27 mEq/L. Results of chest radiography and computed tomography showed a small left apical pneumothorax (A) and pneumomediastinum extending from the base of neck to the distal esophagus and laterally into the left axilla (B). Esophagography results were unremarkable. 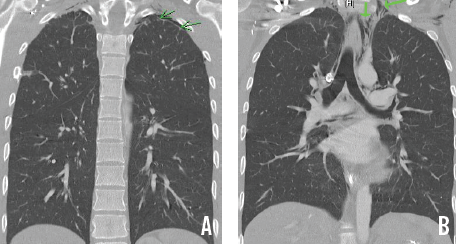 After symptomatic management with intravenous fluids and antiemetics, the patient improved and was discharged after 3 days. With complete abstinence from marijuana, he remained asymptomatic for the next 3 months. Thereafter, he began using marijuana again; he presented to the ED with 3 days of cyclical vomiting, which was managed conservatively. A year and a half has passed since then, and the patient has remained asymptomatic.

To our knowledge, this is the first reported case of cannabinoid hyperemesis syndrome (CHS) with pneumothorax and pneumomediastinum. Traditionally, cannabinoids have been used for their antiemetic properties, which are mediated by the cannabinoid receptor CB1 and can get downregulated with chronic use.1 The stimulation of CB1 receptors in the gastrointestinal mucosa can suppress gastric emptying in a dose-dependent manner,2 which may contribute to the pain and vomiting seen in CHS.

Our patient’s pneumothorax and pneumomediastinum may have resulted from the rupture of a subpleural bulla caused by forceful vomiting.