Candidal Intestinitis in an Immunocompromised Boy

An 8-year-old boy who had undergone an orthotopic heart transplant at 2 years of age for dilated cardiomyopathy, and who was on chronic immunosuppression with tacrolimus, received a diagnosis of acute Epstein-Barr virus (EBV) infection. The diagnosis was based on reverse-transcription polymerase chain reaction (PCR) analysis of plasma for EBV RNA. Three weeks before receiving the diagnosis, the boy’s tacrolimus level had been 7.6 ng/mL, and 2 days before the diagnosis, the level had been 4.9 ng/mL (reference range, 5.0-15.0 ng/mL).

He received 2 cycles of chemotherapy per Children’s Oncology Group protocol ANHL0221 and a third cycle per protocol 9917, including cytarabine and methotrexate, in addition to continuous tacrolimus therapy. He experienced severe neutropenia (white blood cell count, 200/µL) for 10 days immediately after chemotherapy induction. Six weeks later, he developed watery diarrhea, abdominal distention, fever, and hypotension. Fecal leukocytes were present, and his loose stools tested positive for Clostridium difficile by PCR analysis. The boy was transferred to pediatric intensive care and was started on broad-spectrum antibiotics, including cefepime, vancomycin, and metronidazole, for suspected neutropenic enterocolitis.

The patient was started on intravenous antifungal therapy, including lipid-formulation amphotericin B and fluconazole. Although he had transient resolution of fevers, he remained critically ill, with continued abdominal distention and tenderness, despite antifungal therapy. Repeated surgical exploration was discussed, but the risk was deemed greater than any possible benefit. His condition deteriorated, requiring respiratory and cardiovascular support; the boy died 15 days after the discovery of the intestinal perforation.

His terminal course was thought to be exacerbated by disseminated adenovirus infection, which was detected by whole blood PCR results showing a viral load of more than 2 million copies/mL and which grew from viral culture of a bronchoalveolar lavage sample. In addition, PCR and direct fluorescent antibody testing of a sample from an oral lesion were positive for herpes simplex virus viremia. The family declined an autopsy.

Candidal intestinitis or enterocolitis is caused by invasion of Candida species into the gastrointestinal (GI) tract. Although Candida species are present routinely in stool cultures of immunocompetent persons and are unlikely to cause disease in that population, the organism’s presence carries a very high mortality risk in the immunocompromised population. Because candidal intestinitis is extremely rare, the diagnosis could be missed, resulting in delayed initiation of therapy and contributing to the high mortality rate.

Our search of the literature revealed 7 cases of candidal intestinitis, 6 of which occurred in adults.1-6 The single pediatric case was in a 14-year-old boy and was associated with concurrent C difficile infection, similar to our case. All of the published cases, as well as the case we describe, occurred in immunocompromised individuals who presented with local GI symptoms, including diarrhea. Mortality related to candidal intestinitis occurred in 4 patients (and in our patient), all of whom were heavily immunosuppressed and had neutropenia or pancytopenia.1-3,5 Death occurred in 2 of the other cases but was thought to be secondary to cerebral hemorrhage, which occurred within 3 days of hemicolectomy in both cases.2

In the cases in which computed tomography was performed, findings included pneumatosis intestinalis and intestinal perforation, making surgical intervention and resection of the involved GI tract crucial.1,2,5 In each case, the diagnosis of candidal intestinitis was confirmed with fungal staining and culture of resected tissue samples or endoscopic biopsy samples.

In some of the cases, disease progression and death were rapid despite antifungal therapy.3 While blood culture results were not reported in all cases, 2 patients had positive results for Candida species; in those cases, GI infection preceded bloodstream infection and subsequent spread to other organs.1,3

Two of the patients recovered completely.4,6 These patients were not as heavily immunosuppressed as the patients who died, were clinically stable, and were treated as outpatients. The diagnosis of candidal colitis in both patients was confirmed on histopathologic examination of biopsied colon specimens from colonoscopy. Both patients were treated with oral fluconazole.4,6 Our patient was treated with combination antifungal therapy with fluconazole and lipid-formulation amphotericin B, but no treatment guideline is available for this diagnosis.

The pathophysiology of candidal intestinitis is not completely understood. An animal study using immunocompromised gnotobiotic piglets that had been orally inoculated with Candida albicans showed that the development of disease depended on the immunosuppressed state of the host and the virulence of the organism.8 The study also demonstrated that Candida organisms colonizing the gut invade the wall of the alimentary tract predominantly in ileal and colonic locations, multiply in gut-associated lymphoid tissue and other lymphatic tissue, and spread to the bloodstream and other organs.

Candidal intestinitis should be considered in the differential diagnosis of diarrhea in immunosuppressed patients. In patients with heavy immunosuppression, this infection can result in or contribute to mortality, making early diagnosis and treatment critical. In patients who are only mildly immunocompromised, candidal intestinitis may be treatable and have a favorable outcome. 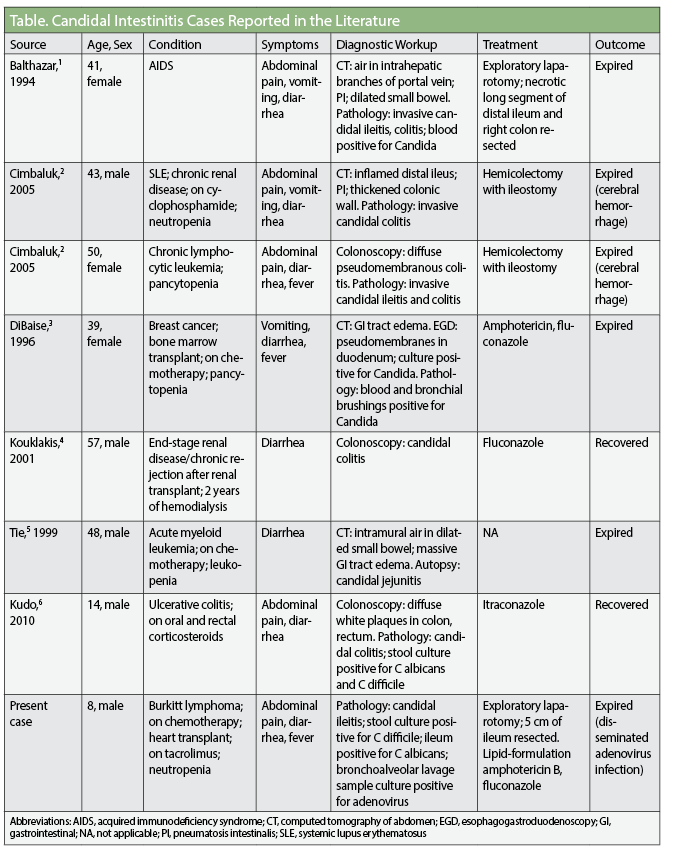 Hazar Kobayaa, Sureyya Savasan, Kathleen Meert, and Eric McGrath are in the Department of Pediatrics at Children’s Hospital of Michigan, Wayne State University School of Medicine, in Detroit.

Adam Tawney is a student at Wayne State University School of Medicine.