Can You Spot the Cause of This Girl’s Scalp Lesion and Body Rash?

An 8-year-old African American girl was brought in for evaluation following a visit to an outside emergency department (ED) 5 days previously. Four days before the ED visit, the girl had developed a boggy, tender plaque on her scalp, with pustules, hair loss, and purulent drainage (Figure 1). The mother now was concerned about 3 lumps on the back of the girl’s neck (Figure 2), and she reported that her daughter had had a widespread pruritic rash of tiny papular lesions for the last 2 days on her trunk, back, and extremities (Figure 3). 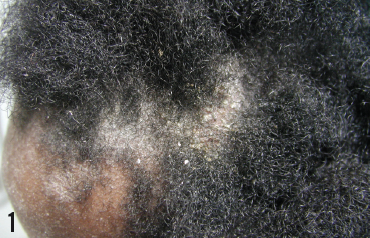 A diagnosis of scalp abscess had been made in the outside ED, and a 10-day course of cephalexin had been initiated; however, the mother did not think that the scalp lesion or the lumps on the back of the neck had been improving.

The girl was otherwise asymptomatic, and the rest of the physical examination findings were unremarkable.

What is causing these dermatologic symptoms?

Tinea capitis is the most common dermatophyte infection in the children younger than the age of 12 years, and it is particularly common in African American children.1,2

The peak incidence of the condition occurs between the ages of 3 and 7 years, although infants and adults can be affected less commonly.

Several dermatophytes may cause tinea capitis, but Trichophyton tonsurans is the most prevalent etiologic agent in the United States, causing more than 90% of infections.3

Tinea capitis can present in several clinical forms ranging from the subtle seborrheic dermatitis pattern, with diffuse scaling and minimal inflammation, to the more severe kerion pattern, with boggy and tender plaque, alopecia, and purulent drainage from the surface along with cervical or suboccipital lymphadenopathy, as in this case.

The most common presentation, however, is scaly and pruritic, often with multiple patches of alopecia where hair shafts have broken off at the surface, giving the appearance of black dots.

This form is found predominantly in North America and primarily affects African American children, usually spreading by way of child-to-child contact. The causative agent is T tonsurans. Depending on the severity, cervical or suboccipital lymphadenopathy can be present.4

Tinea capitis infections frequently are confused with other common dermatologic scalp diseases such as alopecia areata, seborrheic dermatitis, psoriasis, impetigo, and, as in this case, bacterial folliculitis.

Our patient presented with kerion, which represents a vigorous host immune response to the dermatophyte. The presence of the tender plaque with purulent drainage, along with the large suboccipital lymphadenopathy, contributed to the initial erroneous diagnosis of “scalp abscess” and the initiation of antibacterial medication. A scalp fungal culture grew T tonsurans.

Our patient also presented with a widespread and extremely pruritic rash that is consistent with id reaction in association with the primary tinea capitis infection.5 Id reaction is autosensitization dermatitis and not a drug reaction; the diagnosis usually is made clinically based on the characteristic symmetric skin lesions that develop following the primary trigger. Id reactions usually are preceded by an exacerbation of the existing dermatitis induced by infection, scratching, or inappropriate therapy.

The management of tinea capitis requires systemic oral antifungal therapy, because the medication must penetrate the hair follicle. The medication of choice for first-line therapy is griseofulvin; the use of terbinafine and itraconazole in patients with griseofulvin allergy is an effective alternative strategy.6

In our case, the early recognition and the timely treatment of the primary triggering infection with the appropriate antimicrobial were essential to the clearance of the rash. Our patient received a total of 8 weeks of griseofulvin therapy. Also, because of the marked inflammatory condition associated with kerion, which can lead to permanent scarring alopecia, the girl received a 1-week course of oral corticosteroids, together with an antipruritic to control for the significant itching associated with id reaction. n

Ahdi Amer, MD, is an associate professor of pediatrics in the Department of Pediatrics at Wayne State University School of Medicine, Children’s Hospital of Michigan, in Detroit.