Can You Identify These Asymptomatic Hypopigmented Macular Lesions? 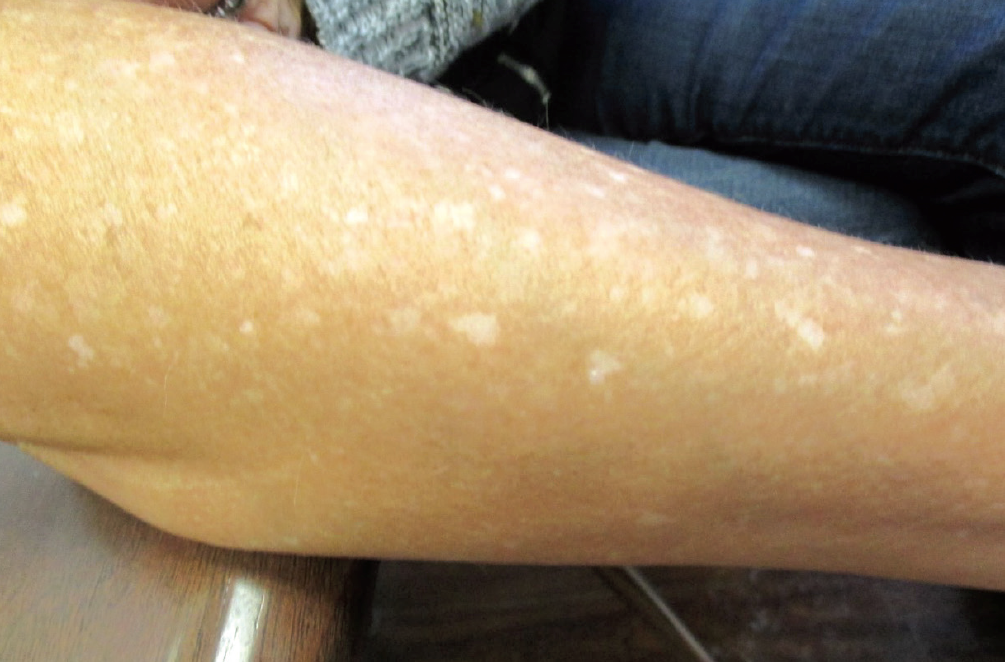 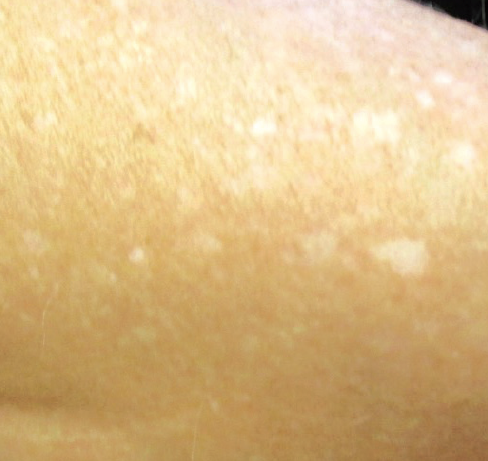 Physical examination revealed multiple discrete, porcelain-white macules that were 3 to 5 mm in diameter, with well-defined borders, mainly on the forearms, and also the shins. No scaling was noted. The rest of the examination findings were essentially unremarkable.

A clinical diagnosis of idiopathic guttate hypomelanosis was made. The patient was reassured of the benign nature of the condition and that no treatment was required. He was advised to use sunscreens when outdoors.

Idiopathic guttate hypomelanosis, also known as leukopathia symmetrica progressiva, is an acquired leukoderma that is characterized by multiple, discrete, well-circumscribed, smooth-surfaced, round to oval, small, porcelain-white macules, predominantly on the shins and forearms.1 The condition was first described by Costa in 1951 in 2 patients under the name leucopathie symétrique progressive des extrémités.2 The term idiopathic guttate hypomelanosis was coined by Cummings and Cottel in 1966.3

Idiopathic guttate hypomelanosis occurs in persons of all races and skin types.4 The prevalence in the general population is not known. In one study, 646 (55%) of 1174 consecutive subjects who visited the Department of Dermatology at Kyunghee Medical Center in Seoul, South Korea, were found to have idiopathic guttate hypomelanosis.5 The condition is more common in individuals over 40 years of age, and the prevalence increases with age.5 There is a slight female preponderance.5-7

The exact etiopathogenesis is not known. Some authors suggest that the condition may result from an age-related somatic mutation of melanocytes with a resulting reduction in the number of dopa-positive melanocytes and pigment granules.6,7 There is a genetic predisposition, given that individuals with HLA-DQ3 are more prone to idiopathic guttate hypomelanosis, whereas individuals with HLA-DR8 are least prone to this condition.8 Familial aggregation of this condition has also been observed.6 Other predisposing factors include chronic solar exposure, phototherapy, repeated microtrauma (eg, the use of “body scrubbers”), and autoimmunity.5,9

Histologic findings include an atrophic epidermis, a thickened orthokeratotic basket-weave stratum corneum, flattened rete ridges at the dermal-epidermal junction, moderate to marked reduction of melanin granules with small foci of retained melanin granules (skip areas) in the basal and suprabasal layers, and a reduced number of dopa-positive epidermal melanocytes with fragmented or absent dendrites.6,7,9

Idiopathic guttate hypomelanosis is characterized by multiple, asymptomatic, discrete, well-circumscribed, smooth-surfaced, porcelain-white macules. The lesions are usually 2 to 6 mm in size, but sometimes they are larger.4 The borders are sharply defined, with round or angular outlines and normal skin markings.4 Sites of predilection include the forearms, arms, and shins.5,7 The chest, abdomen, buttocks, and thighs may also be affected, but usually to a lesser extent.7 Lesions on the face have rarely been described.5 The lesions do not show any desquamation, atrophy, infiltration, or scarring.10 The condition usually occurs in association with other skin changes of chronologic aging and photodamage, such as solar lentigines, ephelides, and actinic keratoses.5

The diagnosis is mainly clinical based on characteristic physical features. The diagnosis can be aided by dermoscopy, which shows amoeboid, feathery, petaloid, and nebuloid patterns.4

The condition is cosmetically unsightly and may have an adverse impact on quality of life. Without treatment, the lesions tend to persist and may slowly enlarge.6 The lesions usually become more numerous with time.10

Treatment is not necessary except for cosmetic purposes. After all, no effective treatment is actually yet available. The lesions may improve modestly with topical tretinoin, a topical corticosteroid, a topical immunomodulator (tacrolimus, pimecrolimus), cryotherapy with liquid nitrogen, superficial dermabrasion, nonablative fractional resurfacing, and fractional carbon dioxide laser therapy.1,9-13

Sun avoidance during hours of peak UV intensity (11 am to 4 pm) and the use of broad-spectrum sunscreens and protective clothing when outdoors may help to prevent the appearance of new lesions and the worsening of existing lesions.