Can You Identify This Boy’s Growing, Darkening, Hairy Lesion?

A 3-year-old boy was noted to have a dark, slightly raised skin lesion on his left upper arm at birth. Over time, the lesion became bigger, darker, and hairy. There was no known family history of any similar lesion or melanoma. 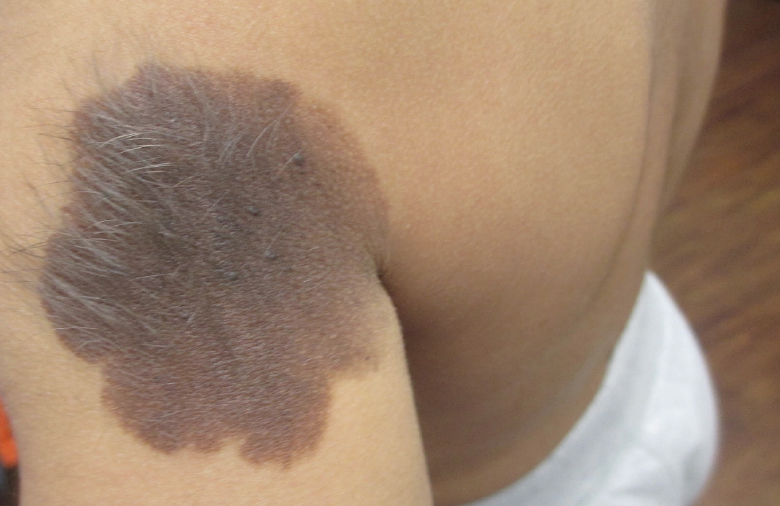 Physical examination revealed a 12-cm, discrete, dark plaque on the left upper arm, with small dark papules within it. Tufts of coarse hair were seen over the lesion. There was no other cutaneous or systemic abnormality.

Melanocytic nevi are composed of a proliferation of nevus cells that may be present in the dermal-epidermal junction (junctional nevus), in the dermis only (intradermal nevus), or in the junction as well as the dermis (compound nevus). The majority of congenital melanocytic nevi are intradermal or compound in nature, with nevus cells extending more deeply into the dermis than those of acquired melanocytic nevi.10 The nevus cells can be seen within skin appendages such as hair follicles and sweat glands, between collagen bundles, and surrounding smooth muscles, nerves, and blood vessel walls.10-12

Congenital melanocytic nevi of the small and medium type are usually round or oval and symmetric.1,11 Their color varies from light to dark brown. They usually are evenly pigmented.12 However, more than one color can be present in a congenital melanocytic nevus, and the border of the nevus can be a different hue from the central body of the nevus.15

Occasionally, those nevi located on the scalp and face can be pinkish red and, rarely, nonpigmented.15 The majority of the lesions are palpable but reasonably flat at birth.10 They may be hairy or hairless.1 Most nonhairy congenital melanocytic nevi are less than 5 cm in diameter.6 With time, the lesions tend to become darker and more elevated.13,16 Coarse dark hair may become prominent in late childhood.13,16 Congenital melanocytic nevi can involve any location in the skin. Sites of predilection include upper back, chest, lower trunk, shoulders, and proximal limbs.1

Giant congenital melanocytic nevi present as dark brown to black plaques, often with a verrucous or cobblestoned surface over time.6,16 Color variation is common in these lesions, and hypertrichosis often is present. Giant congenital melanocytic nevi frequently are accompanied by multiple smaller, widely disseminated “satellite” nevi.1,14 These nevi occur most commonly on the posterior trunk and are often known as garment nevi or bathing-trunk nevi.10

Diagnosis usually is a clinical one. Random biopsies of the nevus usually are not helpful. However, biopsy of a newly expanding nodule or suspicious lesion is indicated. Magnetic resonance imaging of the central nervous system (CNS) should be considered for patients with a giant congenital melanocytic nevus or multiple medium-sized congenital melanocytic nevi, or if CNS melanosis is suspected.14,17

When deciding whether to excise the lesion, cosmetic and psychosocial issues, the potential for malignant transformation, ease of clinical follow-up, complexity of removal, risk of surgery, and functional outcome must be considered.24 The management must be individualized for each patient.

When the congenital melanocytic nevus is associated with leptomeningeal melanocytosis, surgical removal of the nevus is indicated. In the absence of leptomeningeal melanosis, prophylactic removal of a large congenital melanocytic nevus is controversial. Some experts recommend prophylactic removal of the lesion in toto, with excision into the deep fascia.25 In spite of this, the absolute risk of malignant melanoma, although low, is still considerably higher than in the general population.24 Other experts recommend partial-thickness excision, laser treatment, curettage, chemical peels, or dermabrasions with regular follow-up.24,26 A conservative approach, with serial photography of the nevus and follow-up every 6 months for 5 years and every 12 months thereafter, also has been supported.4 Authors advocating for the latter approach reason that untreated congenital melanocytic nevi can lighten up spontaneously, that routine surgery cannot eliminate the risk of malignancy, and that early surgery carries increased anesthetic risk.4 Approximately 17% of these lesions will lighten with age.4,27 Rarely, congenital melanocytic nevi resolve spontaneously with or without an associated halo or vitiligo.28-30

Dr. Barankin is medical director and founder of the Toronto Dermatology Centre.