We present a case of an elderly man with altered mental status who was found to have calyceal rupture and acute renal failure as a result of bladder outlet obstruction and an obstructive kidney stone. The patient improved with bladder decompression and supportive management.

An 85-year-old man with a past medical history of hypertension, hyperthyroidism, and dementia presented with a 1-day history of agitation and confusion. He had complained of urinary frequency, which had been treated with oral levofloxacin in the outpatient setting. The symptoms worsened, and the patient became more confused and agitated. He also complained of swelling of his feet and difficulty walking. He had had poor oral intake and dysphagia for more than a week prior to presentation. He reported a history of fever and chills but no cough, chest pain, or dyspnea. He neither drank alcohol nor smoked tobacco.

Physical examination revealed a temperature of 37°C, a tachycardic heart rate of 105 beats/min, a blood pressure of 121/76 mm Hg, a respiratory rate of 45 breaths/min, and oxygen saturation of 98% on room air. The patient was agitated and groaning occasionally with his eyes closed. Heart sounds S1 and S2 were regular in rate and rhythm. The lungs were clear to auscultation. 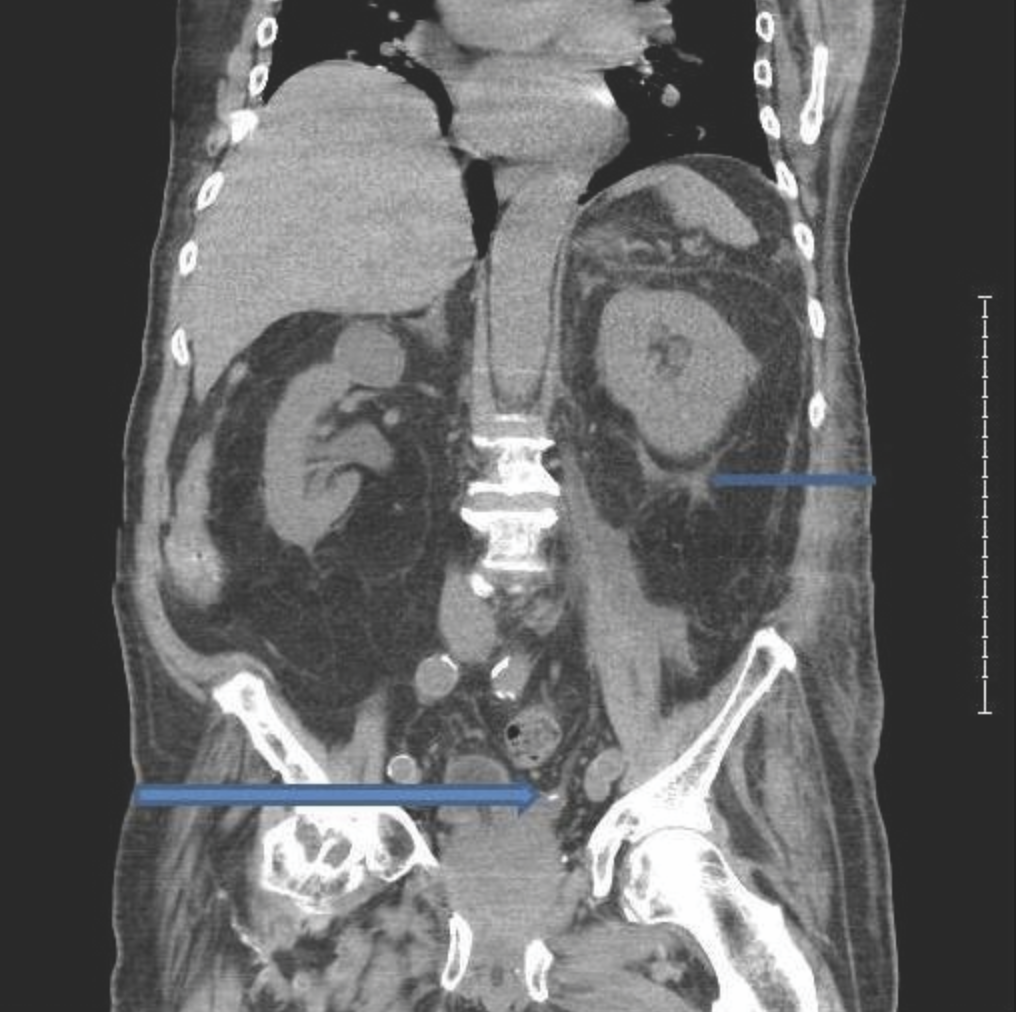 Abdominal examination findings included generalized tenderness that was more marked in the right iliac fossa with guarding. A bedside ultrasonography scan of the bladder revealed a grossly distended bladder with possible obstruction.

A Foley catheter was placed, which immediately drained 1 L of cloudy urine. The Foley catheter was clamped and intermittently opened to gradually decompress the bladder. The patient continued to have polyuria with bloody urine after removal of the urinary obstruction.

Laboratory test results revealed acute renal failure, with a creatinine level of 13.6 mg/dL, a blood urea nitrogen level of 245 mg/dL, a potassium level of 7.5 mEq/L, a bicarbonate level of 17 mEq/L, and an anion gap of 23 mEq/L. The patient had leukocytosis as evidenced by a white blood cell (WBC) count of 24,770/µL with 86.8% neutrophils; a hematocrit of 36.6%; and thrombocytopenia as evidenced by a platelet count of 123 × 103/µL. Urinalysis results showed 100 WBCs per high-power field and 3+ blood, but urine culture results were negative for pathogens. Cardiac enzymes were slightly elevated, with a creatine kinase level of 460 U/L and a troponin level of 0.22 ng/mL, which were thought to be a result of demand ischemia. Prostate-specific antigen was elevated at 13.8 ng/mL. 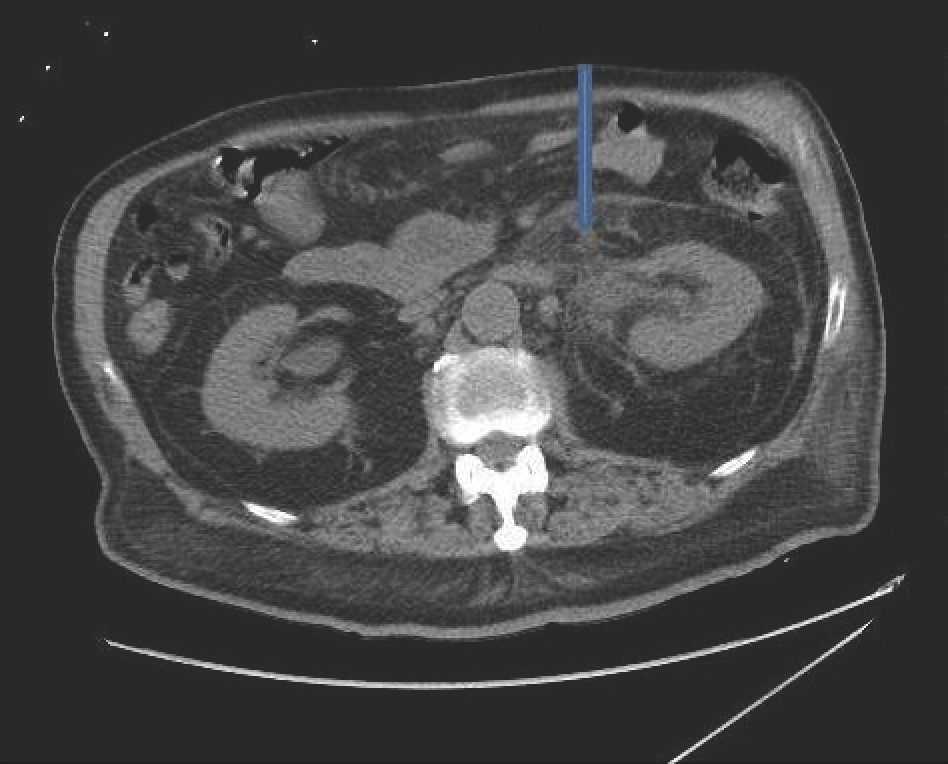 A computed tomography (CT) scan of the abdomen and pelvis (Figures 1 and 2) showed a 5-mm calculus at the left vesicoureteric junction causing hydronephrosis and calyceal rupture. This finding is consistent with other studies, which have reported that distal calculi are more often associated with calyceal rupture.1 It is postulated that ureteric obstruction leads to increased renal pelvis pressure, causing rupture of the fornices. It is thought to be a renoprotective mechanism to avoid excessive pressure buildup in the renal system.

Our patient had a bedside ultrasonogram performed, and once the features of bladder outlet obstruction were noted, a noncontrast CT scan was done. We did not use a contrast CT protocol due to the patient’s renal failure, which was thought to be secondary to obstructive uropathy. Acute renal failure secondary to obstructive uropathy is common and usually resolves with relief of the obstruction.9 In our patient’s case, bladder outlet obstruction largely contributed to the development of acute renal failure.

The management of calyceal rupture is mainly conservative for small urinomas, although intervention is sometimes necessary to relieve the obstruction.10 Patients with large obstructive stones may require ureteral stenting or lithotripsy.11 Larger urinomas may require percutaneous drainage with a nephrostomy tube.12

Management for our patient was mainly supportive, with Foley catheter bladder drainage, intravenous fluids, and management of his electrolyte imbalance, particularly hyperkalemia. Common indications for stenting in patients with kidney stones include infection with perinephric urinoma, leukocytosis with bandemia, and severe symptomatology such as abdominal pain and vomiting. Postobstructive diuresis and hematuria are common in these patients, and careful replacement of fluids to match their losses is important.

Japheth E. Mukaya, MD, is a physician in the Department of Internal Medicine at North Shore Medical Center in Salem, Massachusetts.