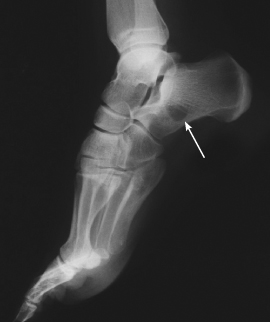 During the evaluation of a 15-year-old boy with an injury to the right foot, an unexpected radiographic finding was noted.

A pseudocyst is a normal variant that looks like a lytic lesion but is actually a rarefaction of the normal trabecular pattern; the trabecular rarefaction is a low stress area of bone that becomes apparent when it is surrounded by more prominent higher stress areas. MRI scans of a pseudocyst show a normal bone marrow signal. In addition to the region of the anterior calcaneus, the greater tuberosity of the humerus is another common site for a pseudocyst.1

Comparing the radiograph with the abnormal finding with prior studies, when available, and films of the contralateral side can help distinguish a pseudocyst, which is usually of no clinical significance, from a true lytic lesion, which can be benign or malignant. ■