Button Battery in a Baby Boy 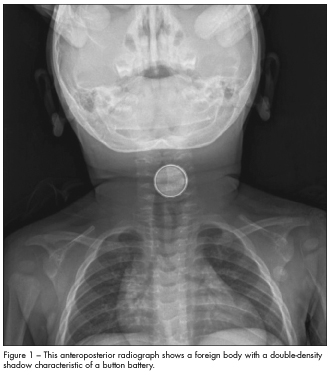 A 10-month-old boy was brought to the emergency department because of labored breathing and fever. His symptoms developed the previous evening and also included drooling, cough, gagging, nasal congestion, and mildly loose stools. The mother attributed the symptoms either to food allergy, because they occurred a few hours after the infant had accidentally ingested kiwi (a known allergen), or to teething. The morning of presentation, an uncle noticed a chemical odor on the boy’s breath but had not witnessed a chemical ingestion. The infant was drinking less than usual but had normal wet diapers.

The patient had a prior history of vomiting and diarrhea with exposure to kiwi and mango. He had been otherwise healthy. He was given no medications and had no known drug allergies. His immunizations were up-to-date.

On examination, the patient was smiling. He had excessive drooling, mild nasal congestion, and mild subcostal retractions. Temperature was 38.8ºC (101.8ºF); heart rate, 120 beats per minute; respiration rate, 36 breaths per minute; blood pressure, 98/54 mm Hg; and oxygen saturation, 96% on room air. The lungs were clear, with some intermittent transmitted upper airway sounds, great air entry, and no stridor or focal findings. On oral examination, secretions pooled in the posterior pharynx; there were no oral lesions or signs of caustic ingestion. The remaining physical findings were normal.

The presence of drooling and lack of a clear explanation for the labored breathing prompted radiographic examination of the chest and upper airway. Anteroposterior and lateral radiographs revealed a foreign body at the C4-C5 level within the cervical esophagus, with associated marked prevertebral soft tissue swelling (Figures 1 and 2). The patient was immediately taken to the operating room. During endoscopy, a lithium button battery (2 cm in diameter and 0.2 cm in depth) was removed. Severe esophageal narrowing, with a lumen diameter of only 1 cm, was also noted.

Button battery ingestion occurs most commonly in children younger than 6 years, with increasing severity and mortality for children younger than 4 years.1,2 Button batteries are prevalent in the home and are found in remote controls, calculators, watches, hearing aids, games, clocks, key chains, and many other household items.1 They can range in size from 6 mm to greater than 20 mm. Outcomes are worse with larger (> 20 mm) batteries.2

Ingestion of a button battery is considered a medical emergency because of its potential complications, which are significant and rapid. Severe corrosive esophageal injuries may occur within a few hours of ingestion and can result in tracheoesophageal fistula, perforation, or hemorrhage.2 An ingested button battery can cause damage in a variety of ways—from electrical discharge, battery leakage of alkaline or other irritating components, and physical pressure.1,2 The longer the battery remains in the GI tract, the more severe the damage.2 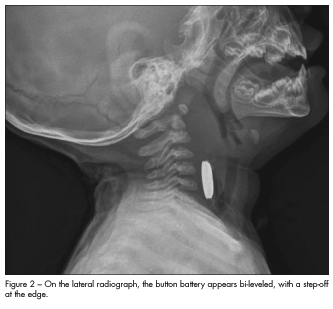 Signs and symptoms. Children who have ingested a button battery may have chest pain, cough, stridor, anorexia, nausea, emesis (sometimes hematemesis), diarrhea, abdominal pain, fever, or chemical-smelling breath. Because foreign body ingestions are rarely observed and often occur in the preverbal child, diagnosis is difficult and can be obscured by a nonspecific presentation.2 In this case, the infant had several “red herrings,” including allergen exposure, cold symptoms, and teething, that could have delayed diagnosis.

Radiographic findings. Button batteries can be identified on anteroposterior and lateral radiographs of the chest and abdomen. On the anteroposterior view, the battery has a double-density shadow, giving it a “halo” appearance (see Figure 1), which is in contrast to the homogeneous appearance of a coin.1,2 On the lateral view, the battery is bi-leveled, with a step-off at the edge (see Figure 2). Similar to coins, the batteries tend to lodge at sites of physiologic narrowing
(ie, esophageal sphincters).

Management. Button batteries in the esophagus require emergent removal by endoscopy. Surgical care may be necessary in the event of esophageal or bowel perforation. For button batteries found distal to the esophagus, removal is indicated based on the presence of symptoms, magnet co-ingestion, size, patient age, and duration of exposure.2

After extraction of the battery, patients are monitored in the ICU because of the risk of battery erosion into large vessels, such as the aorta, which could result in hemorrhage and exsanguination. Antibiotics can be considered in patients with concern for mediastinitis or perforation.3 Other therapeutic options, including manipulation of enteric pH levels, polyethylene glycol, and promotility agents, need further study to prove efficacy.2

Children who have ingested button batteries are at risk for delayed complications, such as esophageal stenosis and vocal cord paralysis, and require long-term follow-up.2 Our patient required nasogastric tube feedings postoperatively because of severe esophageal narrowing, but transitioned to oral feedings over several months. At 1-year follow-up, he continued to have feeding difficulties but was otherwise growing well, despite having had the battery in his system for 24 hours or longer.

Clinicians should educate families about prevention and proper childproofing.4 Manufacturers can help by altering the battery design, improving the seal of the battery compartment, and replacing large batteries with smaller ones.1,4