Brown Band on Teenager's Thumb: What Cause? 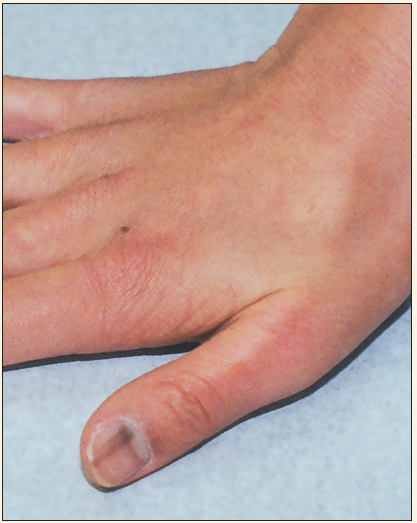 THE CASE: A brown band runs along the longitudinal axis of this teenager’s thumb.

What is the most likely diagnosis?

Melanonychia striata is the correct answer. 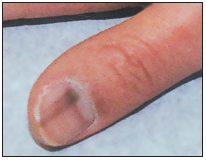 DISCUSSION: Melanonychia striata is characterized by a brown or black band that runs along the longitudinal axis of the nail. The condition is common in blacks, Chinese, and other relatively dark-skinned persons, but it is rare in whites. The thumbs and index fingers are most commonly affected.

Subungual melanoma is included in the differential diagnosis of melanonychia striata. Findings that suggest melanoma include an abrupt onset after middle age, a band width greater than 6 mm, rapid growth, variegated coloring, blurry edges, and nail dystrophy. Hutchinson—the spread of pigmentation into the proximal and lateral nail files—is highly suggestive of subungual melanoma.