Breast Milk, Solid Food, and Allergy Prevention: Are They Connected?

My 4-month-old daughter has been breastfed exclusively. When is the ideal time to start solid foods? And is it possible to prevent allergies?

Even though it has been reported that infants who are breastfed experience lower rates of respiratory tract infections, wheezing, otitis media, gastrointestinal (GI) infections, and sudden infant death syndrome, the role of breastfeeding in allergy prevention remains an area of intense study.1-3

Today, breast milk is the preferred nutrition for infants, according to major health organizations. In 2012, the American Academy of Pediatrics (AAP) reaffirmed its 2006 policy statement about breastfeeding.3 The AAP recommends breastfeeding for the first year of life, with human milk as the sole source of nutrition for the first 6 months; the consumption of human milk is recommended in combination with solid foods from 6 to 12 months of age and beyond.3The World Health Organization’s recommendations are similar, with the addition of continued breastfeeding until 2 years of age.4 The European Society for Paediatric Gastroenterology, Hepatology, and Nutrition (ESPGHAN) also recommends sole breastfeeding up to 6 months of age but additionally states that if solid foods must be added earlier, they should be added between 17 and 26 weeks of age.5

When to Introduce Solid Foods

The great debate about breastfeeding and allergy prevention centers on the timing of introduction of solid foods. Breastfeeding is known to be immunoprotective for a newborn’s immature intestinal immune system.

The immunoglobulins and cytokines found in colostrum and breast milk provide the infant with immunoprotective factors as the GI tract develops. Secretory IgA, an important immunoglobulin involved in mucosal defenses, is found in high concentrations in human milk and may protect the infant from early GI infection.2 Published meta-analyses have shown that preterm infants fed human milk had a 58% lower risk of developing necrotizing enterocolitis.3 In addition to secretory IgA, breast milk also contains high levels of CD14, an immune factor that protects the intestinal mucosa by decreasing permeability in the GI tract and inducing the innate immune response.2

Numerous studies have been carried out to determine whether early introduction versus late introduction of solid foods is more beneficial or protective of infants.6-11 These studies have shown conflicting results, however (Table). Among the weaknesses of some of the studies comparing early and late solid food introduction is recall bias related to retrospective data collection. Moreover, researchers’ failure to define the quality and quantity of food introduced or their failure to consistently define clinical outcomes likely contributes to conflicting research results.7 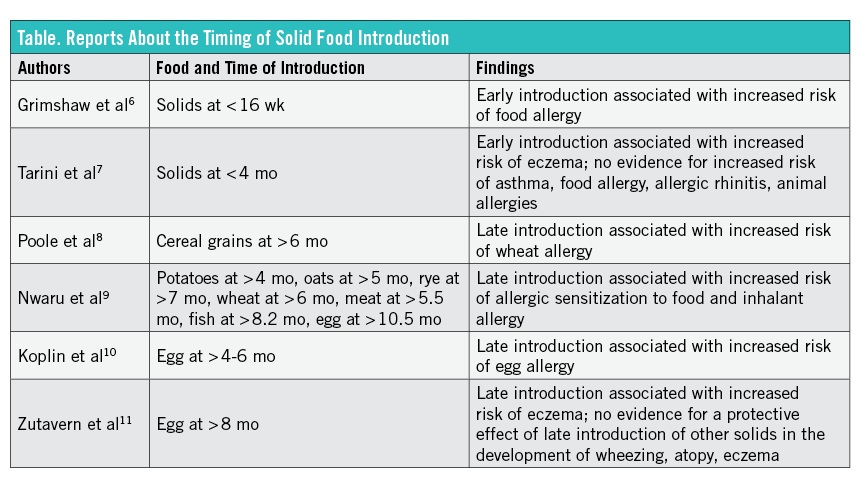 Food allergy reportedly affects 25% of children born to families with a history of atopy, indicating that family history of allergic disease cannot be ignored when discussing development of allergy in the infant.1 Evidence that breastfeeding prevents allergies also has been contradictory.

Differences in concentrations of pro-atopic cytokines and IgE antibodies in human milk have been noted in atopic and nonatopic mothers.2,12 However, insufficient evidence exists about whether their presence of these substances places the infant at higher risk of allergy development.2,12 It has been proposed that differences in breast milk content, maternal food intake during lactation, newborn feeding patterns, and inconsistent feeding measurements have led to conflicting and inconsistent evidence.

Another factor is that breast milk plays an immunomodulatory role when the system is exposed to an antigen (ie, a new food) and breast milk simultaneously. The duration that infants receive solid foods while still being breastfed may play an important role.6

After an infant reaches 6 months of age, the ability of breast milk to meet the full nutritional requirements of protein, zinc, fat-soluble vitamins, and iron is limited. Additionally, ingestion of solid foods is shown to help with maturation of the GI tract itself. While solid food introduction changes both the micro- and macro-environment of the infant’s GI tract, the enzymatic and hormonal responses needed to adapt to this change in diet are developed by 4 months of age.5 Complementary food introduction must occur only after infants have developed the motor skills necessary to consume solids. Thus, there may be a critical window for introducing lumpy solid foods. Late introduction of these textures may increase the risk of feeding difficulties later.5

The ESPGHAN Committee on Nutrition identifies a crucial time for the introduction of solid foods, recommending that complementary feeding should not begin before 17 weeks of age or after 27 weeks, since solid food initiated before or after this crucial time may place the infant at higher risk of food allergen sensitization rather than tolerance.5,6 During this critical maturation period, immunoprotective factors present in breast milk may modulate the processing of food allergens by the GI antigen-presenting cells to T cells in the GI tract, leading to the development of tolerance rather than immune activation.3,6,8

Are maternal food-avoidance diets recommended during pregnancy to decrease allergy risk? Various food allergens, including β-lactoglobulin, casein, bovine γ-globulin, egg, wheat, and peanut proteins, are present in small measurable amounts in human milk.2,12 Therefore, it has been speculated that the introduction of food-avoidance diets may be beneficial to the newborn in prevention of allergic disease. However, no conclusive evidence supports the lasting effect of maternal avoidance diets.1 Thus, while the presence of these allergens can be traced directly to maternal diet, food restriction or avoidance diets are not endorsed by the AAP or ESPGHAN.5

Nevertheless, because a number of studies have shown that peanut intake during pregnancy may be associated with later development of peanut allergy in the infant, the AAP and British Medical Council have suggested that peanut avoidance in pregnancy may have a semiprotective effect.2,12

The increase in the prevalence of food allergy over the last 25 years has made the subject of allergy prevention a highly debated topic.1,10 However, while some studies have observed significant allergy development related to the early versus late introduction of solid foods, these results have not been consistently reproduced.

Current guidelines endorse breastfeeding as the ideal form of infant nutrition, with exclusive breastfeeding until 5 to 6 months of age, with some studies noting the age of 17 weeks as the critical time for introducing solid foods.5,6

Additionally, complementary feeding with breast milk and solid food should continue as desired between mother and infant.3 Immunoprotective factors in human milk may lead to the development of tolerance rather than immune activation when solid foods are introduced in the presence of human breast milk.6

Maternal restriction diets are not endorsed; however, avoiding peanuts is considered acceptable. While studies determining breastfeeding’s effect on allergy prevention are inconclusive, the nutritional and immunologic properties of breast milk continue to make it the ideal choice for infant nutrition, causing some to consider it a nutritional imperative rather than a lifestyle choice.3

Adriana I. Bonasso is a medical student at the West Virginia University School of Medicine in Morgantown.

Emily K. Nease, MD, is an assistant professor of pediatrics at the West Virginia University School of Medicine.

Linda S. Nield, MD—Series Editor, is a professor of pediatrics at the West Virginia University School of Medicine.

1. Greer FR, Sicherer SH, Burks AW; American Academy of Pediatrics Committee on Nutrition and Section on Allergy and Immunology. Effects of early nutritional interventions on the development of atopic disease in infants and children: the role of maternal dietary restriction, breastfeeding, timing of introduction of complementary foods, and hydrolyzed formulas. Pediatrics. 2008;121(1):183-191.