A 15-year-old girl presented with her mother for a sports preparticipation physical examination. She was on the high school soccer team and also had been on the cross-country team for the past several years. She had no physical complaints.

Physical examination results were within normal limits except for a bilateral shortening deformity of the fourth toes, which slightly overlapped the adjacent fifth toes (A). According to her mother, the girl was noted to have had changes in her toes’ appearance since early childhood. Nevertheless, the changes were not interfering with her usual (and often strenuous) daily activities. A careful examination of her hands also revealed bilateral shortening of the fifth fingers, with questionable shortening of the thumbs (B). The girl’s maternal aunt had had a similar finding in her toes, but not her fingers. 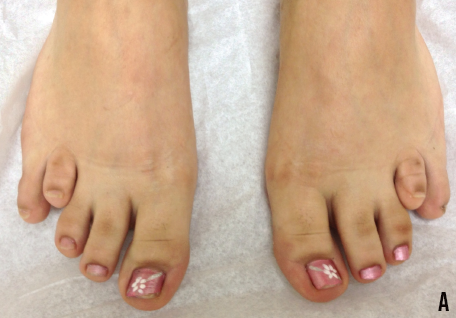 The patient’s past medical history was unremarkable. She was the product of a full-term uncomplicated pregnancy. She had never been hospitalized or had suffered any significant injuries. She started menstruating at age 12 years, and her menses were regular. She was of average height and weight. Her academic performance was that of an honor-roll student. 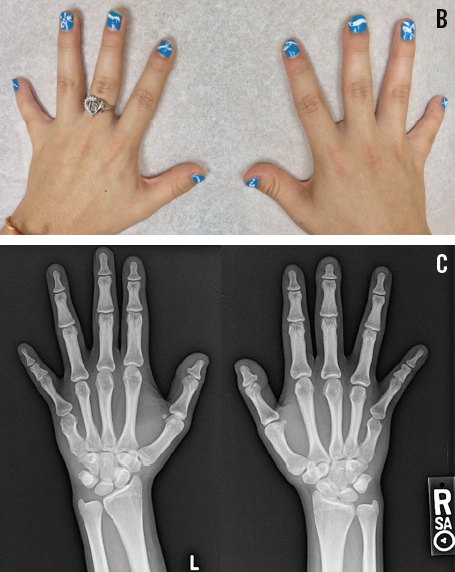 Brachydactyly is the term for shortening of the fingers or toes (from the ancient Greek brachys, short, and daktylos, finger) resulting from underdeveloped, absent, or abnormally shaped phalanges, metacarpals, or metatarsals.1 It may involve single or multiple bones in individual digits, or single or multiple bones in multiple digits.1 Brachymetacarpia is the specific term when the metacarpal bones are involved, while brachymetatarsia refers to the shortening of metatarsals.

Brachydactyly can present either as an isolated malformation or as part of a chromosomal abnormality or a complex malformation syndrome, such as Turner syndrome, pseudohypoparathyroidism, or Cohen syndrome.1 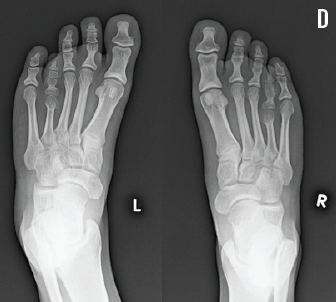 The diagnosis is clinical and radiologic. Bell’s classification of brachydactyly2 delineates 5 major types (A through E) and 3 subtypes of type A (A1, A2, and A3).

Isolated brachydactyly usually is transmitted in an autosomal dominant pattern, with variable penetrance.3 The literature is scarce on the incidence of concomitant brachymetacarpia and brachymetatarsia.4

Mild brachydactyly often is insignificant in terms of functional prognosis. More severe degrees may cause cosmetic concerns or even functional impairment. Referral to an orthopedic surgeon or podiatrist may be indicated.

In the case of our patient, no further workup was considered. Her brachydactyly was categorized as type E in Bell’s classification system. The physical findings were isolated, and no other historical or clinical data suggested a genetic or syndromic disorder. She was referred to a podiatrist for further evaluation.