A 9-year-old boy with a history of congenital skeletal dysplasia presented for evaluation of a rash that had been present on his neck, trunk, and extremities for 2 days.

A similar rash had been noted 1 month prior to presentation while the boy had been hospitalized for surgery; the family had been told the rash was “hives.” He had been given amoxicillin postoperatively, and the family reported that the rash had cleared within a few days, so they had stopped the drug with the assumption that it was no longer needed. 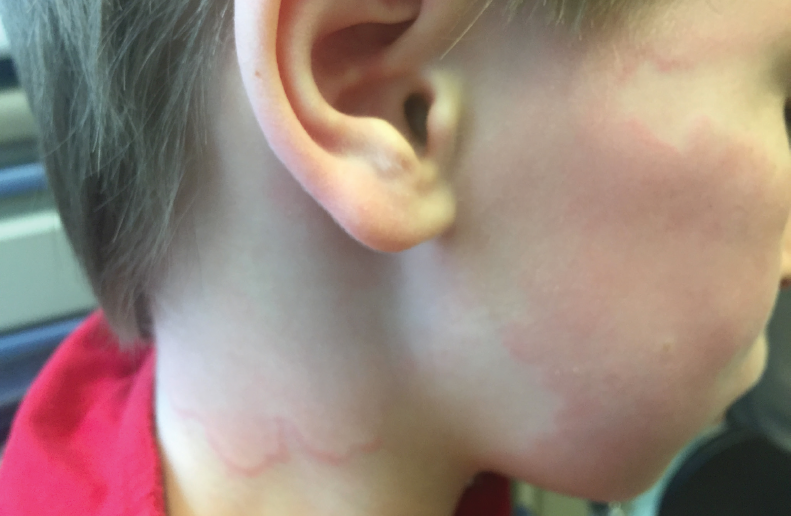 Three days prior to presentation, the boy developed nausea, sore throat, lethargy, fever, and arthralgia, which the family attributed to his skeletal condition. The following day, the rash appeared on his neck, and newer different lesions appeared on the boy’s abdomen and extremities.

At presentation, physical examination revealed gyrate plaques with brightly erythematous borders and with trailing scale on the boy’s neck and jawline; multiple targetoid and polycyclic plaques on his trunk and extremities; and prominent papillae on the tongue. The boy coughed throughout the examination, and the family reported that he had been coughing for weeks.

Results of a rapid strep test were negative; however, the sample quality was questionable, since the patient had difficulty tolerating the test. Samples were sent for serologic testing for Streptococcus and Mycoplasma infections, and azithromycin was initiated to provide antimicrobial coverage for both suspected etiologies.1

Serologic test results were positive for anti-DNase B antibodies and for Mycoplasma IgM antibodies. The boy’s family members reported a dramatic improvement in the boy’s skin and systemic symptoms within 48 hours of his having started antibiotic therapy.

Erythema multiforme (EM) is an acute, immune-mediated condition characterized by targetoid lesions on the extensor and acral regions. Mycoplasma pneumoniae infection is an important cause of EM, particularly in children.2 Group A streptococcal (GAS) infections can display a spectrum of cutaneous manifestations, depending on the stage and progression of disease, from diffuse papular lesions and strawberry tongue to the evanescent, gyrate lesions of erythema marginatum. If not treated promptly, an uncomplicated GAS infection can cause organ damage, notably to the kidneys and heart.

Clinically, our patient’s presentation was suspicious for erythema marginatum, and the presence of anti-DNase B antibody supported this diagnosis. We suspect that he had a streptococcal infection, and that the brief antibiotic exposure resulted in resolution of the rash and, later, a recurrence of the cutaneous eruption. 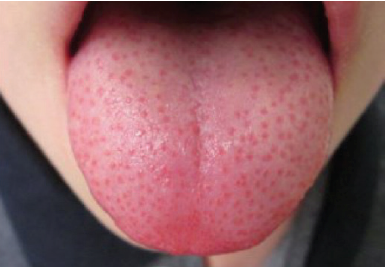 The patient’s cough—which was not consistent with and predated the GAS symptoms—along with the signs of EM, prompted a workup for M pneumoniae infection. This diagnosis later was supported by the presence of Mycoplasma IgM antibodies, which is a highly sensitive and specific marker for acute infection.3 Given that the boy’s presentation suggested two concomitant infections, an antibiotic that could cover both etiologies was chosen; this decision was proven justified when serologic test results later were positive for both GAS and Mycoplasma infection, and when all the boy’s skin lesions and systemic symptoms resolved with azithromycin therapy.

This case illustrates an unusual presentation resulting from two common childhood illnesses occurring simultaneously in a vulnerable patient and remaining undiagnosed for weeks. Timely diagnosis of both infections is important in their early stages, when they are highly treatable.

Molly Storer, BA, MS, is a student at the University of Massachusetts Medical School in Worcester.

Brent Ragar, MD, is a physician in the Department of Medicine at Massachusetts General Hospital in Boston.

Arianne S. Kourosh, MD, is the Director of Community Health in the Department of Dermatology at Massachusetts General Hospital in Boston.