A Boy’s Widespread Partial Thickness Burns: Are They Inflicted or Accidental?

A 12-year-old boy was evaluated in the pediatric emergency department (ED) for a “rash” on the right side of his body. He had static encephalopathy as a result of neonatal herpes simplex virus infection. His past medical history also included a seizure disorder, cerebral palsy, and hypothyroidism. 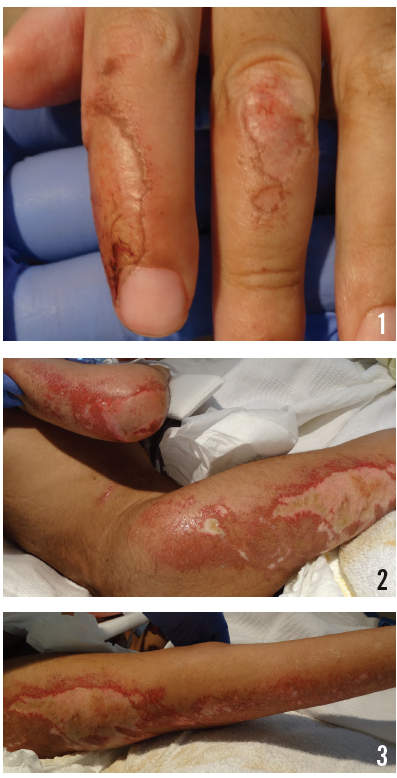 His medications included levetiracetam, albuterol, budesonide, fluticasone nasal, ranitidine, glycopyrrolate, montelukast, phenobarbital, levothyroxine, diazepam, and intrathecal baclofen via pump. No recent changes had been made to his medications, and he had no drug allergies. He was nonverbal and nonmobile, wore diapers, and received all medications and feeds via a gastrostomy tube.

He had been admitted to the children’s hospital 4 days prior for respiratory distress, where he had been placed on a facemask to maintain his oxygen saturation and was then rapidly weaned to room air. He had been discharged from the hospital in the afternoon, and he was evaluated the following afternoon in the ED. The mother reported that the boy did not have a rash at the time of discharge from the hospital. She had first noticed the rash when she changed his diaper at noon on the day after discharge. The rash involved a significant portion of the right side of his body, so she called 911.

Physical examination revealed extensive, irregularly shaped, superficial and partial thickness burns affecting the right side of the boy’s body, along with his left knee and left fingers (Figures 1-3). The areas of denuded skin were patchy and irregular; however, the largest area encompassed half of his posterior right thigh. His diaper area was spared.

When interviewed, his mother denied any new exposures such as to detergents or cleaning supplies. She also denied accidental spills into his bed. With no history provided to account for the burns, a child abuse consultation was ordered, and child protective services was contacted.

Are these burns a result of child abuse, or are they accidental? 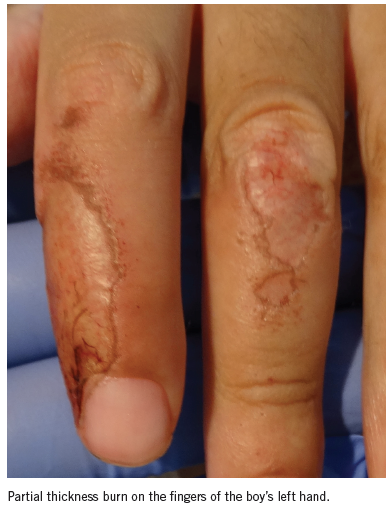 When the patient’s 9-year-old sister was interviewed, she reported that at the time the “rash” had been discovered, the boy’s gastrostomy tube was open, and gastric secretions had pooled in his bed, soaking the bed linens. The patient’s grandmother subsequently confirmed this history. It was unclear why the boy’s mother initially did not provide this history. The boy’s burns matched the pattern and timing of prolonged cutaneous contact with gastric secretions.

Burns resulting from prolonged contact with gastric secretions have been described in adults, particularly in those who are immobilized, unconscious, or in nursing care.1-3 Gastric secretions that cause these injuries can result from vomiting, or from a nasogastric tube or gastrostomy tube leak.2,3 Partial thickness to full thickness burns have been reported with exposure times as short as 3 to 4 hours.4 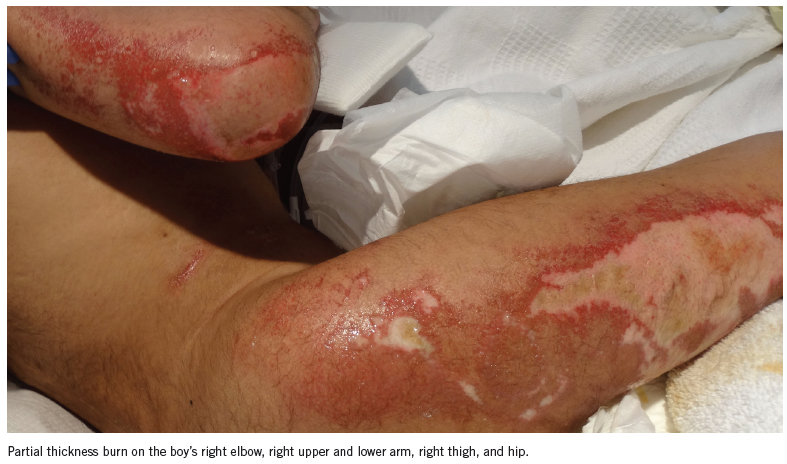 The burn pattern observed in this patient clearly had resulted from prolonged skin contact with gastric secretions; nevertheless, the case had presented without a history to suggest that etiology. In the absence of a plausible accidental history, with a pattern similar to that of an immersion burn, child abuse was correctly considered as the cause. Ultimately, a history of a significant gastric secretion leak accounted for all of the boy’s injuries.

Susan Lamb, MD, is a recent graduate of the Child Abuse Pediatrics Fellowship at the Department of Pediatrics at Eastern Virginia Medical School, Children’s Hospital of The King’s Daughters, in Norfolk, Virginia.

Michelle Clayton, MD, is an assistant professor in the Department of Pediatrics at Eastern Virginia Medical School, Children’s Hospital of The King’s Daughters, in Norfolk, Virginia.

Suzanne Starling, MD, is a professor and director of the Child Abuse Pediatrics Fellowship at the Department of Pediatrics at Eastern Virginia Medical School, Children’s Hospital of The King’s Daughters, in Norfolk, Virginia.