A Boy With a Facial Pruritic Eruption From Cutaneous Larva Migrans

A 5-year-old boy presented with a 5-week history of a pruritic red eruption on his face. His parents reported that he had fallen while playing in the sand on the Brazilian coast, resulting in an abrasion on his left cheek. After the initial wounds healed, scaly pruritic, linear plaques remained. Initially, this was diagnosed as a “dermatitis” and treated with topical corticosteroids for 2 weeks with temporary symptomatic relief, but without complete resolution. Upon examination, there was a 5-cm erythematous, serpiginous plaque with well-emarginated borders.

The boy was diagnosed with cutaneous larva migrans (CLM), also known as “creeping eruption” and “sandworm disease,” which is a common endemic disease in tropical and subtropical areas. It is typically caused by direct contact of skin with the infective larvae of animal hookworms—mainly Ancylostoma braziliense and Ancylostoma caninum—present in soil contaminated with dog and cat feces.1 The nematode larvae do not mature to adult worms within the human body but rather migrate through superficial tissues.2 Clinically, CLM presents as a raised, erythematous and serpiginous skin eruption associated with intense pruritus.3 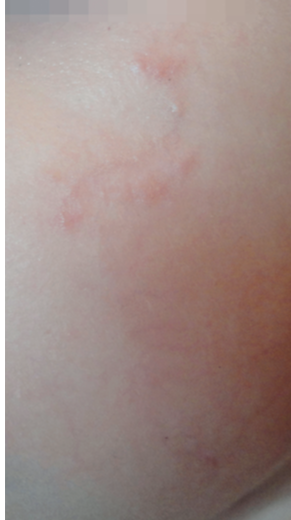 The disease has been reported worldwide, especially in warmer climates. Endemic areas are the Caribbean, Africa, South America, Southeast Asia, and the central and southeastern parts of the United States, as well as other subtropical areas.4 The groups at major risk are travelers, children, and workers whose activities take place in soil contaminated by A braziliense, such as sandy beaches, sand boxes, and underneath dwellings.5 Although A braziliense is the most prevalent agent, cutaneous larva migrans can be caused by other agents, including A caninum, Uncinaria stenocephala, and Bunostomum phlebotomum.6 There is no distinction between male and female.7

The lesions are commonly found on lower extremities, as well as the buttocks, abdomen, and urogenital regions. Findings on arms and head are rare with only limited reports in the literature.8 This presents as intensely pruritic, erythematous, serpiginous plaques, which follow the path that the larva takes in the subcutaneous tissue. Vesiculobullous lesions and impetiginization are rarely found, as well as systemic complications such as erythema multiforme and eosinophilic pneumonitis.9

The diagnosis of CLM is purely clinical and based on the skin findings and history, which includes elicitation of travel. Exposure to possibly contaminated dirt or sand is essential. Biopsies are often nondiagnostic because larva may migrate from areas of erythema. Peripheral eosinophilia may be present.10

The main differential diagnosis to be considered is strongyloidiasis, in the presence of its pathognomonic skin manifestation called “larva currens,” which consists of serpiginous lesions and can be associated with edema and erythema. These lesions are typically found in the perianal area, buttocks, thorax, and lower extremities.11 Gnathostomiasis and loiasis have been cited as uncommon differential diagnoses for CLM.12 Other nonparasitic conditions in the differential diagnosis include allergic contact dermatitis, tinea faciei, mycotic folliculitis, and bacterial folliculitis.

Treatment with antihelminthic agents is the first-line approach. Oral ivermectin (150-200 mcg/day), thiabendazole (50 mg/kg orally for 1-4 days), and albendazole (10-15 mg/kg/day orally for 3-5 days) have been used with good cure rates except for thiabendazole, which has higher risks for side effects. Alternatively, topical thiabendazole 15% or albendazole 10% can be used for 5 to 10 days. Nonpharmacologic agents have been used as well. Liquid nitrogen has been used with limited success.13 The efficacy of liquid nitrogen is limited because it is difficult to identify the location of the larva, which is often several centimeters distal to erythema. Antihistamines are also used for symptomatic control of the pruritus.14-16

The patient was diagnosed with CLM based on his history and clinical findings. He was started on topical thiabendazole at 5%, 3 times per day for 10 days, with complete clinical resolution. To our knowledge, this is the first reported case of CLM occurring on the face.

CLM develops when skin is in contact with soil contaminated by the larvae of A braziliense. It is a well-recognized disease in the tropics and should be considered as a differential diagnosis of dermatologic diseases in travelers, especially for epidemiologically suspicious areas. It usually heals spontaneously within weeks or months; however, if the diagnosis is not made correctly, the clinical picture may be confused by the addition of agents such as corticosteroids. We chose to employ only topical therapy in this case to avoid adverse systemic effects and due to the limited extent of his condition.

The occurrence in unusual areas of the body—such as the face—may be considered in children, due to their greater exposure to soil.  Although CLM rarely presents on the face, it is important to keep it in the differential diagnosis for a refractory dermatosis in children in tropical countries.

Dimitre Luz F. Silva is a medical student at Federal University of Maranhão and a Brazilian government foreign sponsored student on the program Brazil Science Without Borders.

Juliana DE Carvalho Vasconcelos, MD, is a physician who graduated from Federal University of Maranhão - Brazil.