A Boy With Cough, Wheeze, and Chest Pain: Is it Asthma?

Neha H. Shah, MD, MPH, is the director of the Pediatric Hospital Medicine Fellowship at Children’s National Medical Center and an assistant professor of pediatrics at The George Washington University Medical Center in Washington, DC.

A 5-year-old boy presented to the emergency department with a 1-month history of cough that had been unresponsive to albuterol. He had had a 1-day history of left-sided chest pain, abdominal pain, headache, and fever. His past medical and surgical history was otherwise unremarkable. There was a family history of asthma. His father recently had returned home from deployment in Afghanistan, but the patient had no history of travel. His immunizations were up to date.

On physical examination, the boy’s temperature was 38.5°C, heart rate was 130 beats per minute, respiratory rate was 40 breaths per minute, and oxygen saturation was 95% on room air. He had a grade 2 systolic ejection murmur and scattered wheezes with decreased breath sounds on the left side. No lymphadenopathy, rashes, or cyanosis were noted. 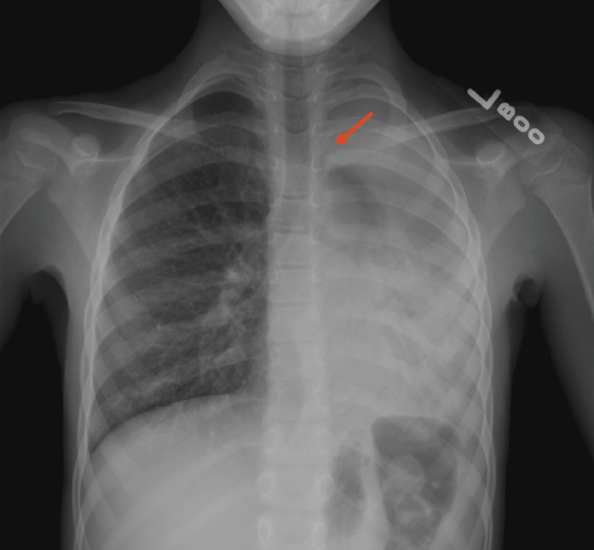 Figure 1. Chest radiograph of a 5-year-old boy showing nearly complete left lung consolidation and a leftward shift of the mediastinum and trachea.

Radiographs of the chest showed near-complete left lung consolidation and leftward cardiomediastinal and tracheal shift (Figure 1). Laboratory test results were significant for a platelet count of 532 × 103/µL, an erythrocyte sedimentation rate of 81 mm/h, and a C-reactive protein level of 9.1 mg/dL. Computed tomography scans of the chest showed left lung consolidation with necrotic-appearing areas and bulky left hilar, mediastinal, and subcarinal adenopathy, which was causing compression of the left main bronchus and leading to atelectasis and bronchiectasis (Figure 2).

After extensive workup for infections, the patient underwent lymph node biopsy, the results of which were inconclusive. Flexible bronchoscopy was performed, during which a mass was visualized in the left main bronchus. The mass was removed, and pathology results showed multiple pale, tan, partially masticated fragments of organic material in loose aggregate, consistent with chicken or turkey (Figure 3). 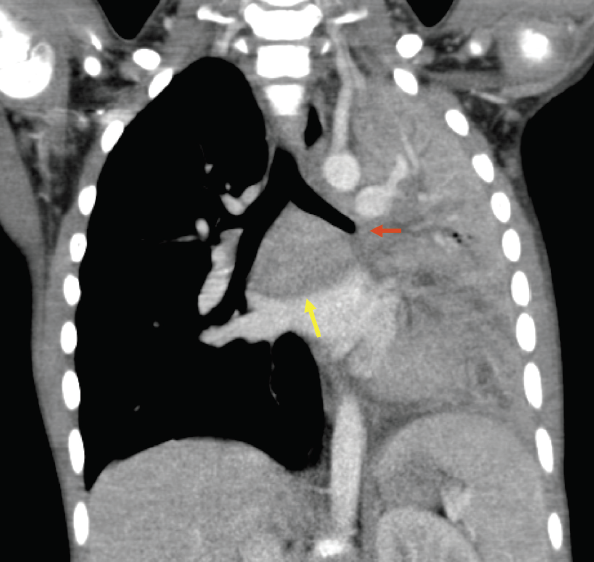 Tracheobronchial foreign body aspiration (FBA) is a fairly common and potentially life-threatening occurrence in children. Approximately 80% of FBA events occur in children younger than 3 years of age, with peak incidence between 1 and 2 years of age.1 Organic materials are the most commonly aspirated objects, with peanuts at the top of the list.1 Unlike adults, children have symmetric bronchial angles, making FBA equally likely to occur on either side. This anatomy changes as the aortic knob develops, displacing the left main bronchus.2 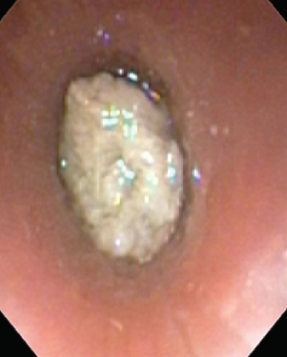 Although reports in the literature have suggested that as many as 8 in 10 patients with FBA present acutely, many patients with FBA are asymptomatic and may not present until weeks or months after the aspiration.3 The most sensitive clinical indicator of FBA is a witnessed event or history of choking. The classic triad of cough, wheeze, and diminished breath sounds was present in only 57% of patients in one review.1 In some cases, a child may present after having received an incorrect diagnosis of asthma or pneumonia and possibly having undergone prolonged and ineffective treatment with bronchodilators, inhaled corticosteroids, or antibiotics.1

The most common findings on chest radiographs in children with lower airway FBA are hyperinflation, atelectasis, mediastinal shift, and pneumonia. Abscess or bronchiectasis may occur as a late manifestation of retained foreign bodies. Nevertheless, results of chest radiography are normal in as many as two-thirds of children with FBA.4 Bronchoscopy is the gold standard for FBA diagnosis.5

Because of the wide variability in presentation and imaging results, clinicians must have a high index of suspicion for FBA. The diagnosis of FBA is delayed by more than 24 hours in approximately 40% of cases.6 The rate of pulmonary sequelae in children who present to the hospital 2 days after the symptom onset is twice that of children who present within 2 days.6

Prolonged presence of a foreign body can be associated with granulation tissue, recurrent pulmonary infections, bronchiectasis, mediastinal lymphadenopathy, perforation of the bronchial tree, and fistula formation. These complications occur in approximately 15% of patients with FBA.6

FBA should be on the list of differential diagnoses for any child with recurrent pneumonia, with pneumonia that responds poorly to treatment, or with persistent asthma-like symptoms despite treatment for asthma.