A 49-year-old man present­ed to the emergency de­partment with hemateme­sis and 2 episodes of melena. Examination findings included resting tachycardia and melenic stool. Blood pressure was 95/50 mm Hg. Multiple raised, soft, bluish 0.3 to 1 cm lesions were noted on the trunk and extremities. 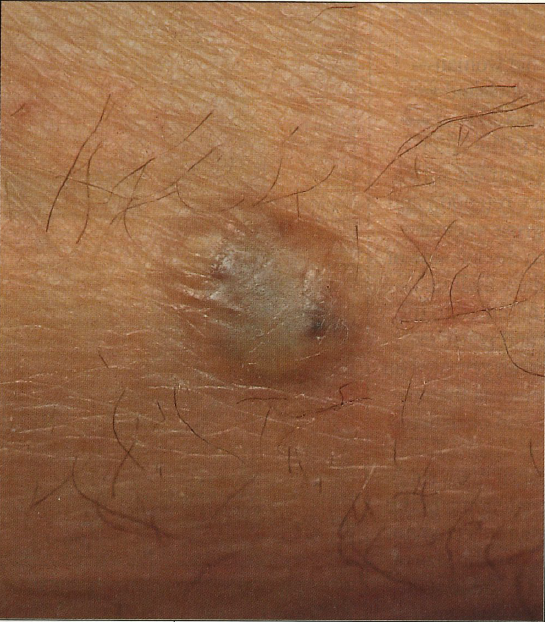 Fluids were given, and the pa­tient underwent an esophagogastro­duodenoscopy (EGD). The EGD revealed multiple blood clots in the stomach and several reddish blue hemangiomas similar to those found on the patient's skin. Blood was actively oozing from one of these stomach lesions; endoscopic therapy with a thermal probe obliterated the bleeding site. The patient experienced no further bleeding. He was discharged from the hospital 2 days later.

Drs Klaus E. Monkmilller and Iilcia C. Fry of the University of Alabama at Birmingham report that an associ­ation between cutaneous vascular nevi, intestinal lesions, and gastrointestinal (GI) bleeding was first described in 1860; this constella­tion of findings was later named ''blue rubber bleb nevus syndrome" to distinguish it from other cutaneous vascular lesions. A family history of this syndrome occurs infre­quently; a few cases of autosomal dominant transmission have been reported.

These distinctive lesions are blue, raised, wrinkled, and of variable size (from 0.1 to 5 cm). Characteristically, the contained blood can be emptied by direct pressure, leaving a wrinkled sac. Single or innumerable heman­giomas usually arise on the trunk, extremities, and face--but not on mucous membranes. Larger, disfiguring hemangiomas and darker, flat macules or papules also may develop.

The small bowel is the most commonly affected site; however, any part of the GI tract can be involved. Blebs in the colon most often are located distally. Occasionally, lesions have been found in the liver, lung, eye, central nervous system, and peritoneal cavity.

These lesions are best demonstrated by endoscopy; infrequently, they have been detected by barium or angio­graphic studies. Microscopically, they are cavernous hemangiomas that are composed of clusters of dilated capillary spaces.

Resection of the involved segment of bowel is indicat­ed for patients with recurrent hemorrhage. Because these hemangiomas may involve the full thickness of the bowel wall, endoscopic laser coagulation can cause perforations and is therefore dangerous.