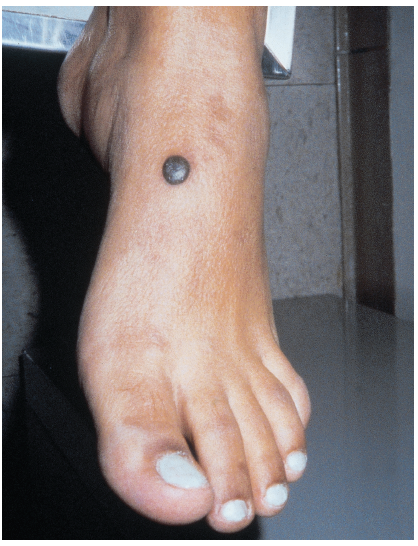 Worsening episodes of pain and bleeding from the lesion on the dorsum of her foot brought a 16-year-old girl to her physician’s office. The spot had gradually enlarged since she first noticed it about 3 years earlier.

Blue nevus is a common lesion in children. More than half of the nevi erupt on the dorsa of the hands and feet. The lesion appears blue because the brown pigment located deep in the dermis absorbs the longer wavelengths of light and scatters blue light. This phenomenon is called the Tyndall effect.

Usually, blue nevi that are stable and smaller than 1 cm in diameter require no therapy. Any rapidly enlarging or changing blue nevi and lesions larger than 1 cm need to be excised for histopathologic examination.