A 13-month-old boy presented to a pediatric emergency department with a painful blister on the right great toe. The blister had been rapidly enlarging over the previous several hours and was preceded by an initial red rash a day earlier. The blister initially had contained clear fluid and later developed a darker color. 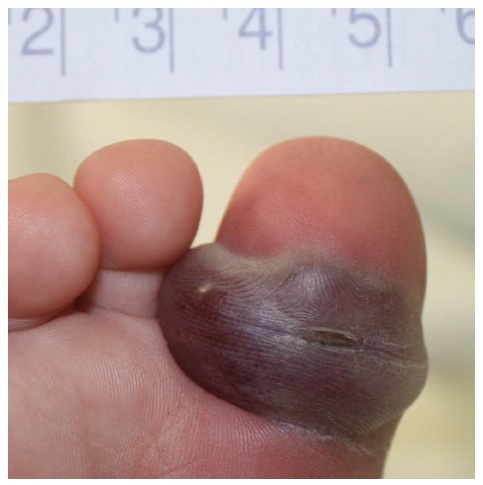 The lesion was incised and drained under local anesthesia, yielding a moderate amount of hemorrhagic purulent fluid. Culture specimens grew methicillin-sensitive Staphylococcus aureus. The child received a diagnosis of blistering distal dactylitis, was discharged on a regimen of oral cephalexin, and experienced no recurrence.

Blistering distal dactylitis is a localized infection of the volar fat pad of the distal phalanx of digits, usually presenting as a fluid-filled blister. The causative organisms in most cases are group A β-hemolytic streptococci, although S aureus (including methicillin-resistant strains1) and Staphylococcus epidermidis also have been isolated.

Typical age of incidence of blistering distal dactylitis is from 2 to 16 years, but it also has been reported in younger patients and in immunocompromised adults. Systemic manifestations are rare.