Blame the Family Pet for This Rash?

All authors have indicated they have no relationship that could be perceived as a potential conflict of interest. 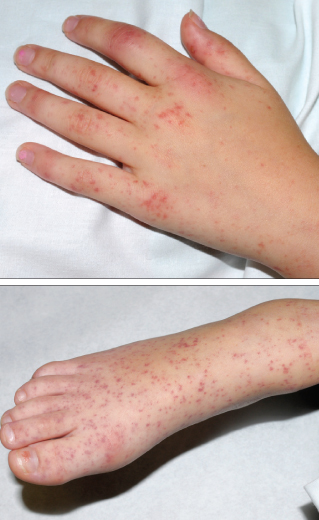 The Case: A 5-year-old girl with rash and fever of 3 days’ duration presented to the pediatric infectious diseases service after same-day referral from her pediatrician. The rash involved the extremities, including palms and soles, and spared the face and trunk.

The day after the rash appeared, the child complained of achiness in her hands and feet that progressed to severe pain and swelling in the extremities and distal joints. The initially patchy red, macular rash changed in appearance over the next day to “little dots” concentrated on her swollen hands and feet.

The child also had headache, poor appetite, fatigue, and decreased urine output. She had no nausea, vomiting, diarrhea, abdominal pain, change in mental status, or upper respiratory tract infection symptoms. She denied recent travel, new foods, and new medicines. The family had a large collection of pets, including 2 cats, a dog, a rabbit, 2 rats, and a horse.

What do you suspect? 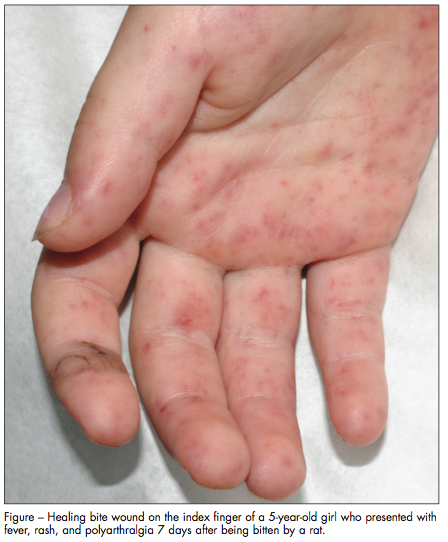 Rat-bite fever (RBF) is a systemic illness caused by either Streptobacillus moniliformis, the bacterium responsible for most cases in North America, or Spirillum minus, which causes the majority of cases in Asia.

About 200 cases of RBF have been reported in the United States, of which more than 50% involved children.1 However, the actual incidence of RBF is unknown because mandatory reporting of the disease is not required.1,2 Although a rare disease, pediatricians may see a rise in cases—with rats gaining popularity among children through recent movies, such as Ratatouille and the Harry Potter series, which featured rats.

S moniliformis is part of the normal nasopharyngeal flora of lab, domesticated, and wild rats.3 The risk of acquiring RBF after incurring a rat bite is about 10%.1 The bacterium can also be acquired via a scratch or exposure to urine or feces of an infected rat or consumption of contaminated food or water (Haverhill fever) and is sometimes transmitted to humans from animals that prey on rats.2,4 However, about 30% of reported cases have no history of rat bite or exposure.1,4

Left untreated, RBF can cause endocarditis, myocarditis, hepatitis, renal impairment, abscesses in various organs, pneumonitis, periarteritis nodosa, volvulus, and overwhelming septicemia.1,5 The disease can be fatal. A mortality rate of about 10% has been reported.1

•Meningococcemia usually progresses rapidly to shock once the rash is present.

The initial symptoms of leptospirosis, also transmitted to humans via rats, are similar to RBF; however, disease progression is often more severe and the presentation usually lacks a rash.7 Common viral infections caused by Epstein-Barr virus, parvovirus B19, and coxsackievirus have more distinctive associated symptoms. Systemic-onset juvenile idiopathic arthritis should be considered when arthralgia is the dominant symptom and symptoms do not improve with antibiotic therapy. However, the rash of juvenile idiopathic arthritis is typically different from that of RBF.

RBF is sometimes difficult to diagnose because it can present with a constellation of nonspecific symptoms and is caused by an organism that is not easily identified by laboratory studies. Blood and synovial fluid cultures often do not produce growth of the organism, which can complicate diagnosis of RBF in patients with no significant history.1 A special trypticase soy agar or broth supplemented with 5% to 20% blood is usually required for optimal growth.1,5,8,9 Polymerase chain reaction techniques have been used to identify S moniliformis in synovial fluid, blister fluid, and bite site eshcar.5,10,11 In the absence of a positive culture, identification of pleomorphic gram-negative bacilli in appropriate specimens supports a preliminary diagnosis.

When a patient presents immediately after incurring a rat bite without signs or symptoms of infection, it is recommended to clean the wound, give tetanus vaccination if indicated, and prescribe a 3-day course of oral penicillin.10 A 10- to 14-day course of intravenous penicillin-G is the recommended antimicrobial regimen for suspected RBF.10

S moniliformis is also susceptible to ampicillin, cefotaxime, doxycycline, ceftriaxone, oxacillin, vancomycin, and erythromycin.1,4 In contrast, the organism has displayed resistance in vitro to gentamicin, tobramycin, tri-methoprim/sulfamethoxazole, and fluoroquinolones.1,4