A 16-month-old previously healthy girl presented to the emergency department after having had 4 days of constipation and nonbloody, nonbilious emesis after every feeding. The patient had been unable to tolerate any feedings and had been acting very irritable and fussy. She had been treated with a polyethylene glycol 3350 laxative and enemas for constipation a few days before presentation.

Physical examination findings were notable for a fussy child who preferred to be positioned with her knees drawn up to her chest. The girl exhibited abdominal tenderness to palpation, especially in the right upper quadrant.

Abdominal ultrasonography, performed because of concern for intussusception, revealed a large biliary cyst measuring 5.0 × 3.7 cm. There was significant intrahepatic and extrahepatic involvement, and the patient was admitted for further workup. 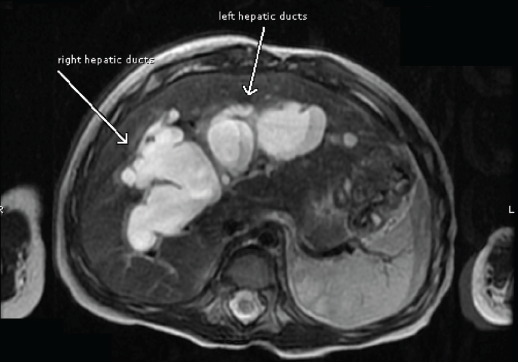 Figure 1. MRCP image of the intrahepatic portions of the left and right hepatic ducts.

Magnetic resonance cholangiopancreatography (MRCP) confirmed the presence of extensive dilation of the intrahepatic and extrahepatic bile ducts (Figures 1 and 2). The patient received a diagnosis of a type IVa biliary cyst. 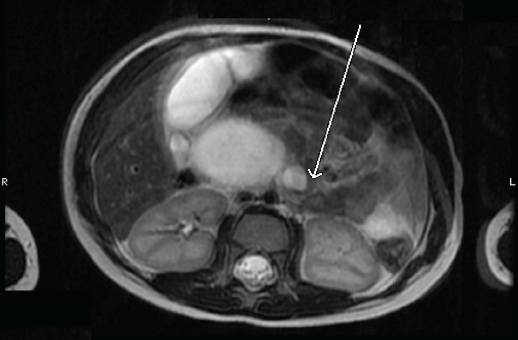 Figure 2. MRCP image of the extrahepatic choledochal cyst. The arrow indicates where the common bile duct enters the duodenum, which is displaced and compressed.

A conference among the surgical team, the liver transplantation team, and the family resulted in the decision to proceed with surgical intervention. The patient underwent laparoscopic excision of the extrahepatic choledochal cyst (Figures 3 and 4) with Roux-en-Y hepaticojejunostomy. Pathologic examination of the gallbladder revealed mild chronic cholecystitis with focal cholesterolosis, while pathologic examination of the cyst showed a mildly inflamed fibrotic wall. The patient was discharged home in stable condition. 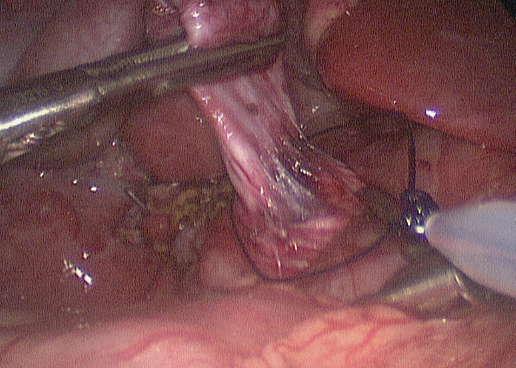 Figure 3. A pre-tied ligature is being placed on the distal-most part of the cyst, which is being retracted superiorly. Some of the pancreas is visible at the level of the tie, which signifies the end of the dissection. The bile ducts at the liver hilum are visible just to the left of the cyst. 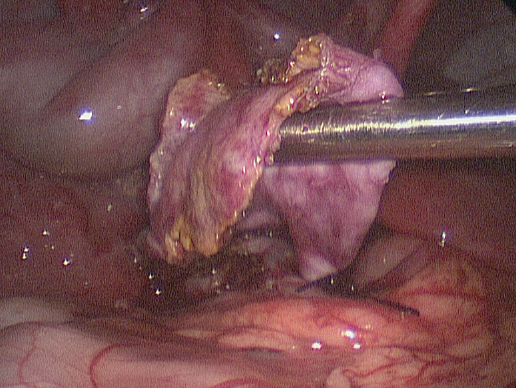 Figure 4. The tapered cyst is shown with the tie in place. Note that the cyst had been opened to better identify its margins during dissection of the portal vein.

Biliary cysts are categorized into 5 types based on the classification system developed by Todani et al.1,2 Type IV cysts are defined by the presence of multiple cysts in the biliary system, with subtype IVa involving intrahepatic cysts. Pathology test results typically show the cyst wall to be fibrotic with evidence of inflammation.3 Patients with biliary cysts typically present with jaundice, abdominal pain, or abdominal mass, although patients rarely present with all three. Type IVa cysts are the second most common subtype after type I cysts.

Historically, many of these extrahepatic cysts were treated with cystenterostomy, which successfully treated the symptoms but was associated with a high rate of cholangitis and malignancy.4 Today, treatment of extrahepatic cysts typically is resection followed by hepaticojejunostomy. The extent of the resection is determined by the proximity of nearby structures, and surgeons need to weigh the risks and benefits of complete resection intraoperatively. Resection effectively relieves symptoms and decreases the risk of malignancy.5

Intrahepatic cysts generally are much more difficult to treat. Whereas the extrahepatic cysts often are excised with wide hilar hepaticoenterostomy, the options for treatment of the intrahepatic cysts include segmental hepatectomy, unroofing of the cysts, and liver transplantation,6 each of which carries its own risk. Routine postoperative surveillance of patients is crucial, since the most common complication is stenosis of the biliary-enteric anastomosis, leading to cholangitis, jaundice, or cirrhosis.7

While intrahepatic ductal dilations are not easily relieved with surgery, there is some question as to the long-term risk of the intrahepatic cysts. In one study, the presence of intrahepatic cysts did not negatively affect surgical outcomes.11 Long-term follow-up is crucial in these patients, since cases of carcinoma reportedly have occurred as late as 26 years postoperatively.12 n