Bilateral Pneumonia in a Patient With Chronic Lymphocytic Leukemia

A 77-year-old man who had been undergoing chemotherapy for chronic lymphocytic leukemia (CLL) was admitted to the hospital for a 2-week history of intermittent fever, sweats, and progressive dyspnea.

On admission, he was hypoxic and required 6 L/min of supplemental oxygen via nasal cannula to maintain appropriate oxygenation. He was afebrile with a heart rate of 98 beats/min, blood pressure of 104/60 mm Hg, and a respiratory rate of 16 breaths/min.

Computed tomography of the chest revealed scattered lymphadenopathy consistent with his diagnosis of CLL, as well as diffuse bilateral interstitial opacities with multiple nodules (Figure). 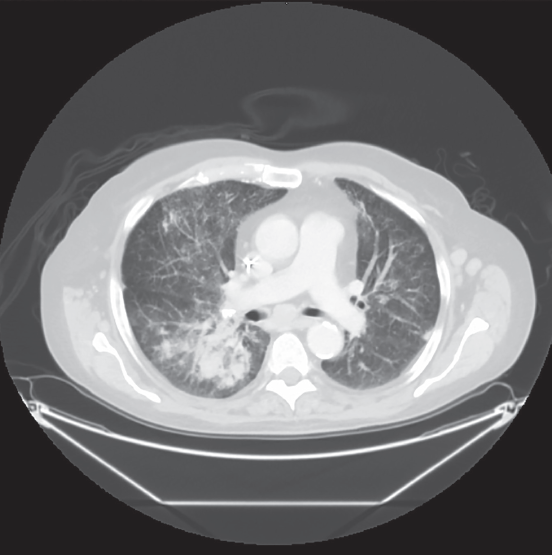 Figure. Computed tomography of the chest with contrast revealing diffuse “ground glass” infiltrates and nodules, along with the classic lymphadenopathy of chronic lymphocytic leukemia.

Because of his immunocompromised state, a broad workup for infectious diseases was undertaken, including negative serologic test results for blastomycosis, cytomegalovirus, histoplasmosis, and tuberculosis. Results of urinalysis were negative for signs of cystitis, and blood cultures drawn on admission were negative for infection. Sputum eosinophils were present, raising the question of an allergic or fungal process.

Because of the patient’s significant allergy to sulfa-containing drugs, the usual therapy with trimethoprim-sulfamethoxazole was not prescribed, and second-line therapy with clindamycin (600 mg intravenously every 8 hours) and primaquine base (15 mg orally once daily) was initiated. Because primaquine use has a high risk of exacerbating glucose-6 phosphate dehydrogenase (G6PD) deficiency, a serum G6PD level was requested. Therapy was initiated while the test results were outstanding, because a delay in therapy was felt to be very risky given his immunocompromised state and tenuous clinical status.

A few days later, his G6PD level was determined to be within normal limits. The regimen of clindamycin and primaquine was continued with dramatic clinical improvement over subsequent days. Because of his low serum level of IgG, a 20-g dose of intravenous immunoglobulin (IVIG) was administered, with a subsequent increase in the IgG level to 587 mg/dL. The patient was discharged in stable condition and placed on a regimen of oral antibiotics (300 mg clindamycin every 8 hours and 15 mg primaquine base once daily) and instructions for continued follow-up with his infectious-disease physician.

CLL is the most common leukemia in the United States, accounting for more than 15,000 cases and 5000 deaths per year.1 It is a disorder of B cell proliferation, and it exists on a continuum that includes small lymphocytic lymphoma.2 Most patients are asymptomatic at diagnosis, but lymphadenopathy and hepatosplenomegaly are common physical examination findings.1 Laboratory findings of CLL include leukocytosis and/or lymphocytosis, which can be dramatic. The diagnosis is confirmed with flow cytometry; biopsy of bone marrow or lymph nodes is rarely necessary.1 Observation is the standard of care for patients with early asymptomatic CLL, with initiation of chemotherapy for progressive or advanced disease.2

Infectious complications in CLL are a major cause of morbidity and mortality. The predisposition to infections in CLL is multifactorial—both the disease and the drugs used to treat it can contribute to a state of immunodeficiency. Persons with CLL have underlying immune defects in humoral and cell-mediated immunity. Agents used in the management of CLL, especially the purine analogues and monoclonal antibodies (eg, alemtuzumab), contribute to the spectrum of infections seen in patients with CLL.3

Many infectious complications seen in these patients are due to the unique impact on immune function related to the specific agents used for CLL therapy. The major categories used in the management of CLL are alkylating agents, corticosteroids, purine analogues, and monoclonal antibodies.1,4 The alkylating agents chlorambucil, bendamustine, and cyclophosphamide share the same mechanism of action. They all attach to DNA bases, resulting in DNA breakage and crosslink that prevents DNA replication and transcription.5 Chlorambucil given alone or in combination with corticosteroids has been used as initial treatment for many years and is still used as monotherapy for older patients. The majority of infections with alkylating agents are bacterial.3,6

The purine analogues consist of fludarabine, pentostatin, and cladribine. They all inhibit key enzymes required for DNA synthesis.5 Of the purine analogues, fludarabine is the most studied. It causes a decrease in T cells and B cells, resulting in defects in cell-mediated immunity, and results in a wider spectrum of infectious complications compared with the alkylating agents. In addition to common bacterial infections, opportunistic infections (eg, pneumocystis) have been reported.3,6

The monoclonal antibodies are alemtuzumab, rituximab, obinutuzumab, and ofatumumab. Rituximab, ofatumumab, and obinutuzumab are anti-CD20 monoclonal antibodies that cause a reduction in the B-cell count.5,7 Severe infections and opportunistic infections are uncommon with anti-CD20 monotherapy.3,8,9 Alemtuzumab is an anti-CD52 agent. This antigen is expressed on B cells and T cells and is associated with profound defects in cell-mediated immunity, as well as neutropenia.3,6 Alemtuzumab has been associated with a wide range of infections, including bacterial, viral, fungal, and protozoal infections. Severe infections have included aspergillosis, candidiasis, pneumocystis infection, and cytomegalovirus (CMV) infection.3

Decreased CD4 lymphocyte levels. Patients with CLL have a reversal of the CD4 to CD8 cell ratio, resulting in a lowered CD4 cell count. This correlates with the severity of CLL and is an important component of both the pathogenesis and the risk of infection in affected patients.10 Many patients with CLL are treated with purine analogues and monoclonal antibodies, which often cause a significant and persistent T-cell immunodeficiency. As with other diseases of T cells—most notably human immunodeficiency virus (HIV)—patients with advanced CLL are at increased risk of infection with opportunistic pathogens including CMV, pneumocystis, toxoplasmosis, and others.10,11 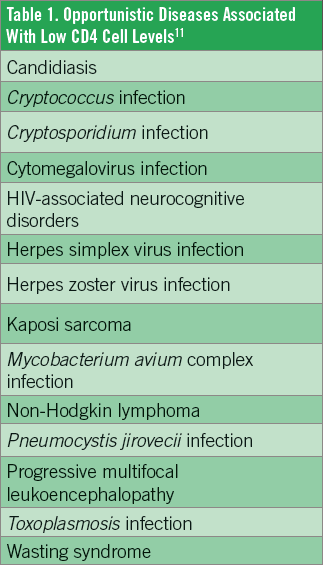 The pathogenesis of the immunoglobulin deficiency in CLL is multifactorial and incompletely understood. It has been speculated that a combination of cytokine secretion and cell-cell interactions between normal lymphocytes and those affected by CLL contributes to the process. Several studies have proposed that B cell function is partly inhibited by the secretion of transforming growth factor β, which inhibits B cell proliferation. T helper cell function may be impaired by the secretion of interleukin-2 receptor; this leads to the downregulation of the T cells and further impairs B cell activation and function.17 While this process is impairing the patient’s normal functioning lymphocytes, the tumor cells, interestingly, are able to use the T helper cells and cytokines to further proliferate.3,10,15,17 Along with these components, several genetic factors and mutations also have been linked to the increased risk of infection associated with hypogammaglobulinemia.3,18 In addition to these factors, cases of CLL patients with recurrent infections and normal immunoglobulin levels have been reported. This suggests that a functional immunoglobulin deficiency, even in the absence of a quantitative immunoglobulin deficiency, may contribute to the immunocompromised state in CLL.10

Because of the prominent role of IgA in mucosal immunity, it is not surprising that the respiratory tract is the most common site of bacterial infections in patients with CLL.3 Additionally, low levels of immunoglobulin G3 may contribute to the reactivation of herpes-type viruses in persons with CLL.17 More research is needed to clarify the role of specific immunoglobulins and the associated risk of infection.

CLL is a common malignancy, often with an indolent course early in the disease process. Infectious complications are common in CLL as a result of both the hematologic abnormalities of the disease and the chemotherapeutic agents used to treat it. One important consideration is the increased risk of bacterial infection due to immunoglobulin deficiency in patients with CLL. Indeed, the administration of supplemental IVIG is associated with fewer bacterial infections in patients with CLL.19

As shown by the case described here, patients with CLL may have a reversal of the CD4 to CD8 cell ratio and thus may be at risk for the same opportunistic infections that affect patients with HIV/AIDS. Consideration of these risks is important when caring for individuals with CLL, particularly as they undergo treatment with immunochemotherapy that can further reduce the function of their immune systems. Indeed, it is standard in current clinical trials for patients with CLL who are undergoing chemotherapy to receive prophylaxis with trimethoprim-sulfamethoxazole for P jirovecii and antiviral prophylaxis with acyclovir during therapy.1 An appropriate suspicion should be maintained for unusual pathogens when a patient with CLL presents with symptoms of infection.

Anna Takala is a senior student in the Physician Assistant Program at Butler University in Indianapolis, Indiana.

Jamie M. S. Mulrow is a senior student in the Physician Assistant Program at Butler University.